The Golden Canyon of Sanjhan has long been on my ‘to do’ list, but for all kinds of reasons I never made it to this spectacular place on Taiwan’s east coast until this hot, sunny May Day weekend.  Now I’ve been I don’t think I’m up to going through all that again, but wow! it’s a truly amazing place….  With a packed weekend of activities (Golden Canton Saturday, River rafting Sunday) and only two days to get it all done in, eight of us piled into a so-called ‘express’ train at Taipei station Friday evening, which stopped at almost every station on the line between Taipei and Ilan.  Fortunately the two Germans in our group had bought along plenty of beer, which they generously handed round, so the long, halting trip went by pleasantly enough.

It was nearly three hours, and nearly 11 pm before we finally pulled into Hualien station, where we were zipped by our homestay owner back north along highway 9 the fifteen kilometers to Sanjhan (三棧) village. Although just a kilometer or two off the highway, Sanjhan was quiet as the grave when we arrived (apart from a couple of barking dogs), and despite the need for sleep after a long day, we paused for a few moments at the edge of the village, beside the river, taking in the stillness, the stars and the near-full moon, which provided enough light to dimly pick out the profile of the lofty peaks looming above the village.

The homestay (Moon Rivers, one of only two in the village) was pretty basic but quite adequate, and the owner extremely friendly, and soon most of the group had snuggled down for a good night’s sleep on thin tatami mats in a pair of rooms.  With the arrival at the homestay of Brittany, the final member of our group (who’d caught a later train after working late) at just before 1 am, we were all assembled and taking a much-needed rest, although only after waking up the homestay owner when we realising we had no idea where the girls were sleeping!

Saturday morning, May Day, we were up bright and early to enjoy the fantastic scenery of mountains that surround  the village, looming high above it.

After trotting across the road to the little cafe run by the owner’s mom for breakfast, we were off to the village’s Visitor Center to grab the gear for the trip from the motley and ill sorted selection on offer, and meet our two aboriginal guides for the expedition: a sixty-something gentlemen who carried a huge wicker basket on his back (filled with our lunch and topped off with an ingenious homemade, rubber-band powered harpoon, and a younger man, obviously half-drunk, who carried nothing except a cut-off plastic water bottle half full of  brownish-coloured alcohol . 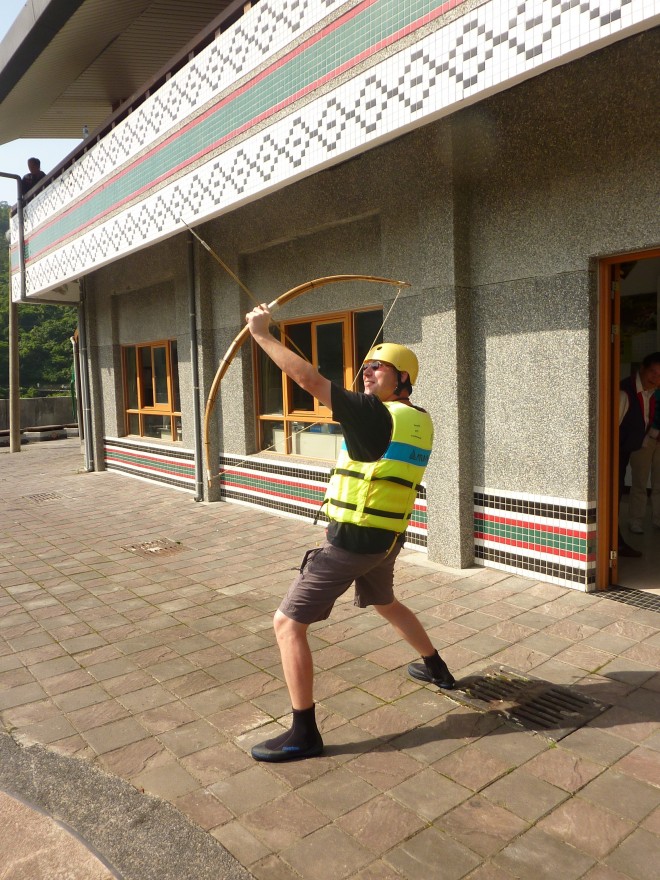 Clad in helmet, buoyancy aid and non-slip booties, we were off up-river soon after 8.

The two-hour-plus trip up the Sanjhan South River to the mouth of the little tributary on which the Golden Canyon lies is nice, with lots of deep pools of icy, aquamarine-blue water (fit to drink, our aboriginal guides told us, straight from the river).

The river bed covered in water-smoothed rocks, mostly of marble in lots of different colors, shades and patterning, and some large and impressive blocks of rock either lying in the middle of the stream or beached on the expansive, dry river bed far from the water .

It’s a pleasant trip, and there are plenty of chances to get wet, but in its lower reaches the scenery along the river was (apart from the beautiful marble underfoot) just like many another place in Taiwan, so it was good to see the gorge narrow after nearly two hours, and the landscape become somewhat more impressive.

Finally, a small, rather inconspicuous tributary stream emerges from a narrow cleft on the right, cascading through a few vast boulders into the main stream: the mouth of the Golden Canyon.  We lay everything down and take a break, which for a couple of the group means floating down the river with the help of our buoyancy aids (the first time we’ve needed them so far, and we’re wondering why on Earth we’d had to lug the hot, uncomfortable things all this way).

The entrance to the Golden Canyon. It looks very unexceptional, and I’d have waded straight past if the guides hadn’t stopped us!

Before entering the Canyon, the older (and more sober) guide warns us that it’s going to get a lot harder from here, but since it’s been such a simple stroll so far, it can’t be all that bad!

The trip inside begins by crawling right under those huge boulders at the base of the Canyon, through a small cave-like aperture, and up a steep, smooth and tricky rockface, where the guides finally made themselves useful by giving us a helping hand.

At the top , a short walk along the bank of the stream and the gorge  sides close in like pincers, the walls almost  block out the sky, and the stream creates a deep, blue-green pool at the bottom of this awesome slot  that almost glowed in the small amount of light that filtered through from the midday sun. Before we go any further our guides call us together and get us to bow our heads while they mutter a quick prayer, at the same time warning us for the second or third time today not to make any loud noises while in the Canyon, for fear of the monkeys above, which (they really told us – no kidding!) sometimes throw stones down at humans down below if startled or excited.

Turning the first corner and suddenly seeing this astonishing and completely unexpected transformation, I let out a loud cry, and a second or two later a rock crashes loudly into the water no more than a foot or two from David, who is standing just in front !   Such an electrifying close shave with certain serious injury or death makes the place, already intimidating enough, seem even more oppressive.  David seemed to attract all the bad luck on this trip, later nearly being accidentally pushed over a cliff-edge on the way out of the Golden Canyon, and, on the way back to Sanjhan, falling over and severely bruising his thumb!

In front of us lies a large and very deep pool of water, fed at the far end by a small waterfall: a formidable and insurmountable obstacle without a rope for almost anyone except our aboriginal guide, who proceeds to swim across, scale the rocks with ease, and fix his rope to an old tree trunk lodged into a crack in the rock above . 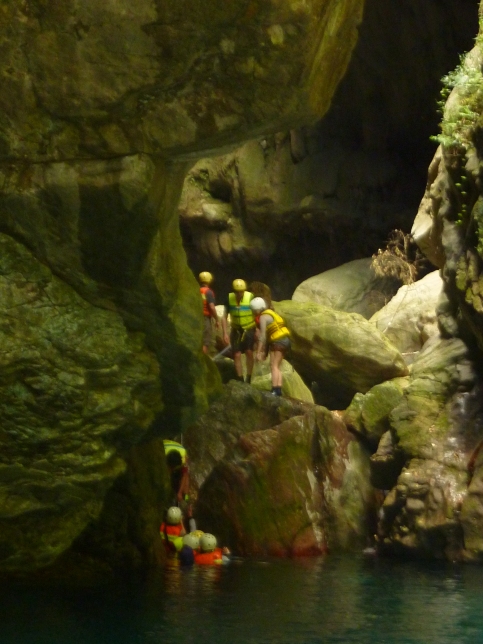 We now began to swim across the pool, and haul ourselves up, with the aid of the rope and later the helping hands of several group members who’ve positioned themselves at the top.  Getting the nine members of the group up safely (several of us were pretty slow at this kind of thing) is a slow business, and those of us standing around, shin-deep in water, soaked to the skin, slowly begin to freeze in the sunless depths of the Canyon.

Cold and physically challenging it might be, but the Golden Canyon is also a staggeringly beautiful place, and once up each obstacle into a new chamber, the sight of another awesome chamber made it easy to forget the penetrating cold.

Across the next long, deep pool lies a second waterfall, only about eight meters or so high, but a far more difficult obstacle than the first, and while a few of the fitter members of the group make it look easy, for the remainder of us climbing the thing is a short but deadly serious grapple with our mortality, struggling to keep hold of the rope and find a foothold in the vertical cliff-face while buffeted by the water plunging over the cascade. The highly undignified travails of certain members of our party (including myself) do however give our inebriated guide some great entertainment: he could clearly be seen standing at the edge of the pool below the falls watching the show and having more than a few good belly laughs at our expense.

When my turn comes, it seems easier than expected at first, but then I swing round the rockface into the waterfall, and holding on for dear life, my pathetic, half- frozen arm muscles nearly give up half-way up, and I have to be hauled bodily up the rest of the cliff. The arm lock at the top, when it finally arrived, came with a pure, unadulterated sense of pure, glorious relief.

Above this a third and much higher waterfall still lies between us and our final goal at the head of the Golden Canyon, but with its many easy footholds and several separate levels, climbing proves  to be child’s play compared with what we’d just done, and shortly we’re standing at the head of the accessible stretch of the canyon, in a huge, arching, grotto-like chamber beside another large pool of emerald water, into which drops a high and very beautiful waterfall.

It would have been the perfect place to rest and enjoy awhile, but the floor of the chamber is rather ominously  littered with boulders which our guide told us hadn’t been there last time, so memories of David’s lucky escape earlier make it a short stop – just long enough to savor our sense of achievement before starting back out.

Getting out of the Golden Canyon is far easier (and quicker) than getting in: we make quick work of the lower two waterfalls by simply jumping off them into the deep water of the pools below, and before long, and without incident, we  re-emerge into the outside world, the sunlight, and a much-needed bowl of hot noodles to warm our shivering bodies.

And that’s about it. Warmed up, our guide feeds the remaining noodles to the fish in the stream, and we start back to Sanjhan. Two hours or so later we walk into the village, drop our soggy life vests, boots and helmets in a heap and crowd into the homestay, each eager to be first to get the thing we all need most at this moment: a hot shower!

Getting there: Sanjhan village lies just off highway nine, about midway between Hualien city and the mouth of Taroko Gorge.

Difficulty: It’s a simple trip up the river to the base of the Golden Canyon, a pair of river tracing booties are a good idea, but old trainers are fine as well. Going into the Golden Canyon itself is much more strenuous, and the services of the a guide (with a rope) are essential. Guides can be hired in the village but with a lack of competition are quite expensive (the advertised rate is NT$1,800 per person). See http://www.sanjhan.com/index_en.shtml (the town’s website, maintained by Jessie, the owner of Moon Rivers Guest House) for details.