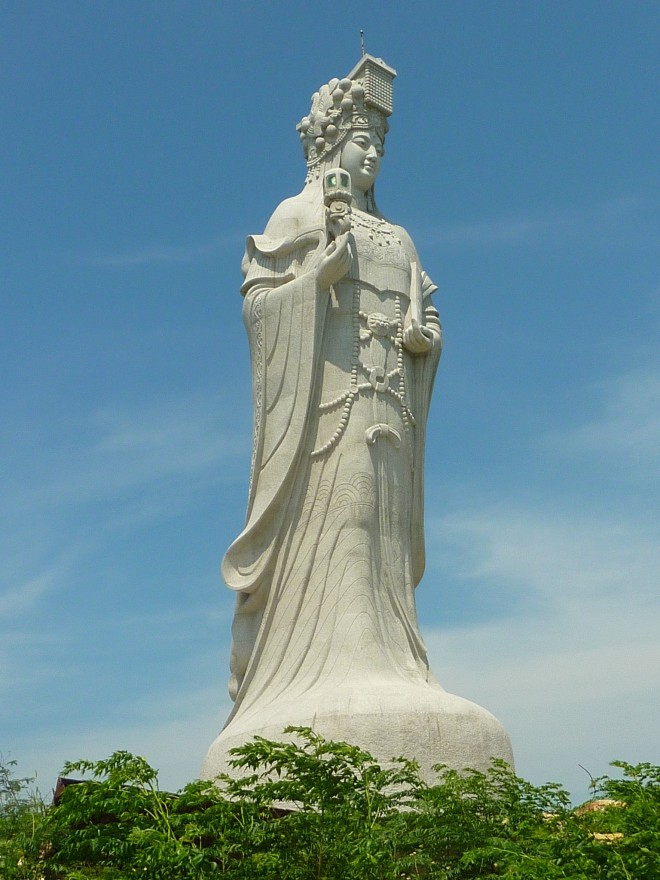 The huge Matsu statue overlooking Magang Village; according to legend the girl who later became the goddess Matsu was drowned in the sea off the island and her body washed ashore on the beach below the statue

It’s 7 in the evening, July 11th, 2010. I should be in Bali, Indonesia, resting up before heading eastwards into Indonesia’s eastern islands for a month or so climbing volcanoes and hiking amongst tribes in Sulawesi. Instead I’m in an internet cafe (or a wangka as they call them here, which sounds like a swear word to us Brits) in the main village on Nangan, the largest island in Taiwan’s Matsu (馬祖) archipelago, the only civilian in a place packed with teenage soldiers, all in uniform, and all playing video games.

My six-week trip to Indonesia was doomed when I decided to stop off first in peninsula Malaysia. During a week in that country of mind-numbingly underwhelming sights and attractions I somehow managed to both:

a: lose all interest in continuing my planned six-week trip, and …

b:  injure my right knee; not badly enough to stop me walking, but sufficient to give me a good excuse to give the trip up as a bad job and return with most of my travel money intact (mainland Malaysia may possibly be the least exciting destination in southeast Asia unless you like fantastic beaches, but it’s certainly cheap!) and make alternative plans for the remainder of my long summer hols. Sure, missing out on climbing Indonesia’s Rinjani volcano and experiencing the (supposedly amazing) customs of the Tona Toraja region is a disappointment, but they can wait until another year. It’s not as though they’re still undiscovered gems.

The traditional Fujian-style village of Fuxing, on the northeast coast of Nangan

Realizing that returning home with no piano students and no (paid) writing work for well over a month would leave me bored to tears within a few days of getting back, I had to think of a plan, and a long put-off trip to Taiwan’s least well-known offshore island group, Matsu popped into my head. Hitting the ground running, within a few hours of getting home yesterday, I’d booked a plane ticket for this morning, phoned through a booking on a cheap homestay in Nangan island, and packed my daypack. This morning at 8:30 the little prop plane took off from Sungshan Airport, and after a bumpy 50 minute flight I’m here: the most exhilarating sudden travel plan I’ve made in years!

A statue of Chiang Kai-shek overlooks Nangan’s main harbor at Fuao, greeting ships coming in from both Taiwan and China

After an exhausting but thoroughly memorable first day (of a planned five-six day trip) exploring Matsu, it’s clear that this stunning place is one of Taiwan’s great unknown treasures. Whizzing on a rented scooter around Nangan (南竿) island (the largest island in the group, measuring just six kilometers or so by about four at its widest point) has taken a whole day: this place crams in a lot, including some truly extraordinary sights, considering its tiny size. 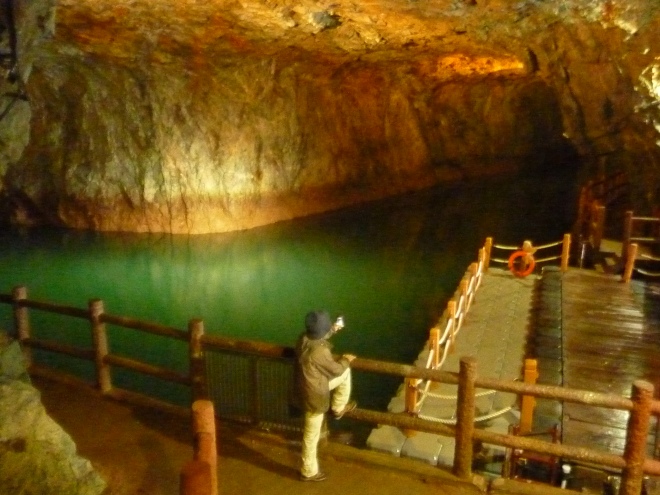 Beihai Tunnel on Nangan, the largest of the three tunnels dug to hide navy vessels during the war, is quite vast inside

Fresh off the airplane the first objective was to get my night’s sleep and wheels for the day sorted out. Things are done differently, I soon found out, on Matsu than elsewhere. Bypassing the couple of scooter rental places in the islands, most of the homestays and hotels rent out their own scooters to visitors: no need for such fussy complications as a driving license, ID or even a helmet! Unfortunately there was no checking out my room this morning. A crowd of off-duty soldiers gathering in the tiny reception of my hotel were waiting for rooms to use during the day. The hotel owner, it turned out, has a very nice thing going, renting out most of his rooms to soldiers wanting to rest and play video games on the in-room computers during the day, then selling the rooms on to the rest of us for a night’s sleep. Arriving back at the hotel as agreed  at 5:30 pm, I joined a small crowd of other travellers waiting in reception for the soldiers to leave and their rooms to become free!

My hotel was in Shanlung (山隴) village, which looked like many other places down south Taiwan, except – uniquely for Taiwan and perhaps the world – in the heart of the town where anywhere else a park or perhaps a square might have been there was a large square of well-tended allotments, surrounded by a rather surreal ornamental stone wall and called (as the large inscribed boulder standing at the entrance  proudly proclaimed) ‘Shanlung Vegetable Garden’.

Quite bizarre was my first reaction, but after a little thought it seemed quite appropriate in this distant outpost of Taiwan where for many decades the locals lived under the constant threat of invasion from Mainland China (which can be seen from several places on the island).  In a place where rough seas or an enemy close-by make essential supplies from the outside world far from dependable, a town park must be a very low priority.

This delightfully eccentric start was just the first of the day’s many  surprises.  Setting off in a clockwise direction round the island’s deeply indented coastline, I soon found progress became amazingly slow, not because the roads were bad (they were often in fact quite wide and mostly very well maintained, and I met only three or four cars, a handful of buses and some other scooters the whole day) but because I was constantly veering off down a side road to explore some quaint little hamlet or admire a stunning stretch of coastline. Nangan is quite simply stunningly beautiful, especially on this magnificent day under a deep blue, cloudless sky. 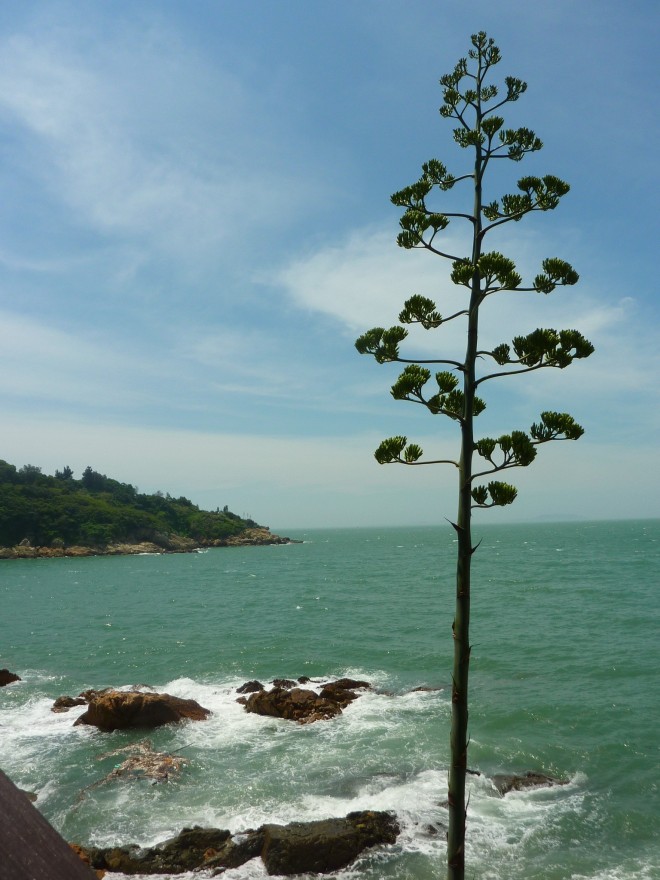 Standing on a promontory of orange rock which almost seemed to glow under the bright sun, the so-called Iron Fort (鐵堡), one of the island’s ‘star’ sights, looked positively Mediterranean today, surrounded by the deep blue sea, with the added happy coincidence of several well-placed agave blooms towering up in the foreground. Most of the construction of the fort however is hidden beneath the rock, as a series of passageways burrow into the rocky crag, ending at gun emplacements commanding five-star views of the fantastic coastline.

‘Sleeping on spears, awaiting the dawn;’ this slogan coined by Chiang Kai-shek is inscribed on this white wall standing high above the main harbor on Nangan island, and visible to boats miles away

It’s not long before you realize that most of Nangan really IS burrowed underground. Like at Kinmen island to the south (but it seems to a far greater extent here), Nangan is peppered with underground tunnels used by the military. Breezing along the island’s roads, I passed the guarded entrance to an army hideout every couple of minutes. Several of the disused ones are now open to tourists, and others lie abandoned at the end of unmarked side roads, ready to be explored by anyone who happens to find it. Exploring the island is like being a kid again, making mysterious new discoveries down dark holes in the ground.

One of the main reason’s I’d wanted to visit Matsu is to see the amazing underground harbours which can be found on several of the islands in the group. Familiar from photos in several books and magazines Nangan’s Nanhai Tunnel (南海坑道) floored me, however, when I finally saw it in person today. A series of four crisscrossing tunnels tracing a design like the Chinese character jing (井) it’s said 120 army boats could fit inside, hidden safe from Mainland Chinese eyes (and bombs). More graphically, if the tunnels were drained, I think you could easily fit several good-sized English cathedrals in each of the four mighty tunnels: they’re absolutely huge holes. A raised walkway goes right round the outside edge of the four tunnels, and takes a full 20-30 minutes to complete, only I had to wait until the sea obliged. At high tide the walkway is covered by several feet of water, and it only emerges several hours after the turn of the tide.  As an engineering feat this place blows me away; Taipei 101 doesn’t stand a chance against this amazing achievement, done without modern digging equipment.

And then stepping outside into the sunlight, the other great aspect of this beautiful island is immediately apparent: the magnificent scenery, and especially the rugged coastline, which vaguely reminded me of Cornwall in places (complete with romantic, wave-washed ruins hugging the rocks above the sea) .

Nangan is a wonderful place. A wonderful place for taking photos, a wonderful treasury of  traditional Taiwanese culture which is increasingly rarely seen nowadays on the mainland, even down south, and an island of wonderful scenic beauty. Most of all though, it’s a magnificent place to explore, and if Matsu’s other islands are anything like as fascinating and full of unexpected delights as Nangan,  then their continued position as one of Taiwan’s least well-known outposts is completely beyond explanation.

Tomorrow I’m off to Dong and Xi Ju (東莒, 西莒) Islands, the southernmost islands in the Matsu group and I can’t wait!

Looking north along Shentien Road towards the bay where the body of the girl who became the goddess Matsu was, according to legend, washed up after her death at sea