The Bat Cave at Nanshanping, near Shifen on the Pingxi Line, is one of the area’s most mysterious places

The Pingxi Branch Line has been a favorite stamping ground of mine for years, providing many days of happy exploring. Until a couple of weeks ago, though, one place (marked prominently, but inaccurately on several hiking maps of the area) remained stubbornly hidden: the Nanshanping Bat Cave (南山坪蝙蝠洞). However thanks to a solitary  reference to the place on a local hiking blog on the Web (the only one source I’ve ever found with any info about the cave), I discovered how to find the trailhead, at the end of a track nearly a kilometer east of the position marked on both my maps. No wonder I’d never found it before…!

Last Sunday’s hike began with a short excursion along the shortish but quite lovely Dongshige Old Trail (東勢格古道). Beginning at Pingxi village, this route (like many others hereabouts) has been ‘opened up’ by the local authorities, yet here they’ve managed to preserve the natural beauty of the scene and not found it necessary to put in intrusively man-made  conveniences such as the endless flight of stone steps that now sweep straight  up one side of nearby Shulung Point, turning what was once a very fine hike into little more than a long Stairmaster session.

It’s an attractive and moderately easy walk, past a yawning mine entrance, and then up through a picturesque wooded glen beside a cascading stream, but the finest moment of the hike comes at the trails’ modest highest point, as the view suddenly opens out and the grassy southern slopes appear suddenly laid out  below.

It’s a lovely area, with a stream winding through the terraced fields, and views up to shapely peaks high above. Below the footbridge the stream (and path) dive back into the woods, and the second beautiful wooded glen of the hike.

On the way back (it’s a there-and-back walk), we climbed over the strangely named Stinking Head Mountain (臭頭山), whose wooded heights are bizarrely and uniquely overrun with a kind of climbing screwpine, whose spiky foliage gives the area a look unlike any other trail I know. From there, we took on the breathlessly steep thirty-minute scramble to the top of Zhongyang Point (中央尖). This is the most dramatic peak in the whole Pingxi area when seen from the west, when it resembles a steep-sided pyramid, thrusting out of the forest into the sky.  It’s a bit of an anticlimax finally standing at the summit, as while nearly sheer cliffs drop away on both sides, there’s no feeling (unlike at the much smaller but more  airy Filial Son Mountain nearby) of being exhilarating exposed, but the view from the top is pretty good.

The knife-edge ridge atop Zhongyang Point

By the time we emerged back on the tarmac road at Pingxi after the hike, it was nearly 3 pm; here I and remainder of the party went our separate ways, as while they returned to their homes in Taipei and Hsinchu, I decided to find, once and for all, that mysterious Cave.

The trailhead is easy enough to find, although you could be forgiven for walking straight past it if you didn’t know where to look. First cross the suspension bridge across the Keelung River near Shifen railway station. Walk through to the main (Taipei-Ruifang) road at the other side, and turn right through the small settlement of Nanshanping (南山坪).

In less than five minutes, there’s a colorful Land God shrine to the left of the road, slightly set back from it. Walk through the metal temple gate and along the tarmac road next to the shrine.

In a couple of minutes the narrow road bends round to the right to end at an old brick farmhouse. On the left at the bend is a stream, culverted through an overgrown concrete channel with faux bamboo handrails. Follow the right bank of the channel and after a few meters a dirt trail appears, winding gently upwards into an attractive grove of conifers. 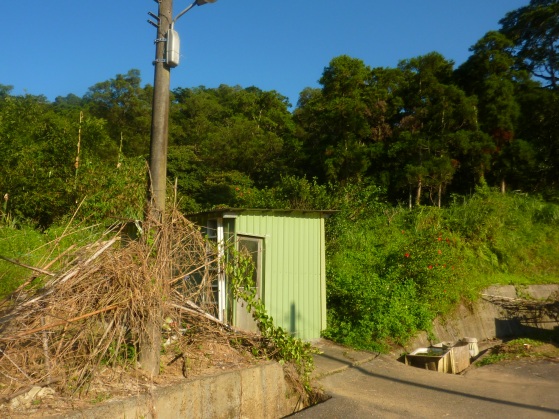 The path soon follows an attractive small stream through the woods. At the junction, keep to the path alongside the stream. The way now becomes harder to find, but keep to the stream, and look out carefully for the plastic trail ribbons. At a couple of tiny metal signs fixed to a tree beside the stream, there are two ways to the cave; either continue following the line of stream (which is often dry this far up, yet rocky and very hard going) or follow traces of path up the bank on the right then contouring the wooded hillside just above the stream for about a hundred meters before dropping to cross it.

Now (about a hundred meters above the metal signs) start veering gradually away from the stream, up the bank to the left. There’s no trail at all now, and the going is rocky, through thick undergrowth so take great care. Head for a solitary white-bark tree, which is a good landmark, and for any plastic ribbons. Your next landmark is a narrow, steep-sided ravine opening up in the wooded hillside and veering off to the left. Once this is found, the going is easier. Clamber a short distance up this side ravine, and the cave (actually a very large, deep overhang) emerges from the gloom at the head of the short gorge, in front.

According to a local I met near the trailhead when I emerged after my exploration (covered in dirt and probably looking distinctly relieved to have made it out in one piece) this yawning,  cavern hollowed out of the side of Mt. Nanshanping, the rocky ridge that looms over Shifen to the south, was used  during the Second World War as an air raid shelter, complete with two-story structure (now gone) inside to accommodate the villagers.  Access must have been relatively easy in those days, but today, even though it lies just a few hundred meters from the nearest road, the great cave is well hidden in the dense jungle, and getting there is a short but difficult adventure only suitable for experienced hikers. Very few people come here these days and this is prime ankle-sprain country, so definitely don’t try to find the cave alone.

It’s a remarkable sight, looming out of the thick jungle, and much more impressive  in the flesh than my sorry photos make it look, but it’s also a pretty wild place to get to. There’s even a second, smaller bat cave further up the mountainside, and the trail apparently continues on up to the knife-edge ridges of Mt  Nanshanping, so there’s still plenty to explore, but I certainly won’t be going back there without a couple of companions – for safety’s sake.