Climbing the easiest (!) of the five routes up the Nangang Cliff

The natural cleft known as ‘A Thread of Sky’

Despite the horrible weather, there have been a few breaks in the rain, and since I’ve had an unusual amount of free time (few piano students over the Christmas hols, and no way to practice my own piano, since my right little finger is still too tender to play) there have been a couple of chances to get out hiking – if only in the area around the city. 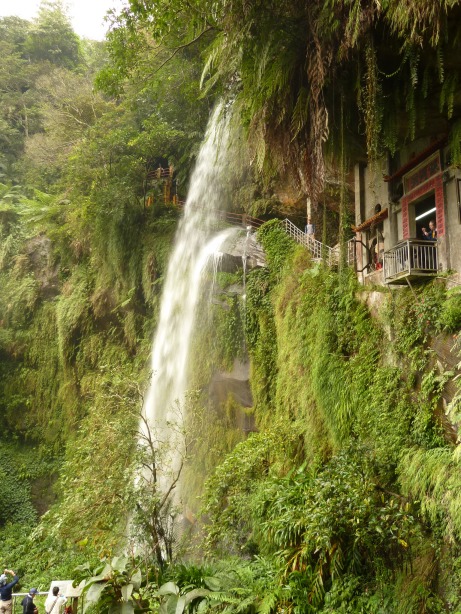 Silver Stream Cave is featured in a ridge hike described on page 141.

Joining Stu and Ross from Taiwan Adventures  on one of their free group hikes on Christmas Eve, we went to one of my favorite places around the city, Silver Stream Cave, but by a completely different route from the one I usually take. I still much prefer my usual (far wilder and more natural) route, but that would have been much too muddy after all the recent rains. Anyway, the hike was billed as a ‘social’ hike, and was as much about networking (and possibly hooking up – it looked like there was a little of both going on), and all in all it was great fun. 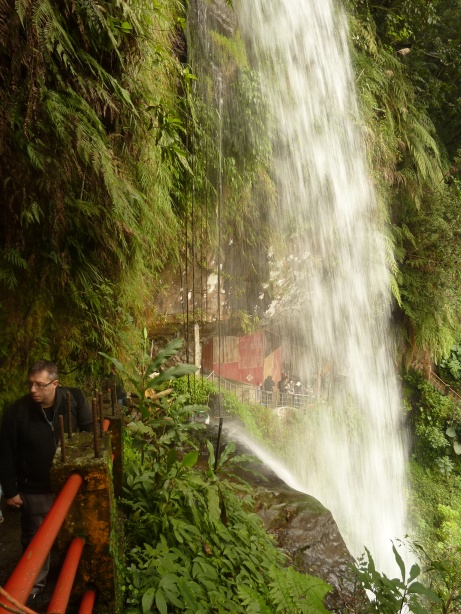 Actually I was so busy trying to be social that I became completely disoriented and it was only when we actually reached the base of the waterfall itself that I realised that we’d been following the route I know so well – from the opposite direction – for the last ten minutes. Apart from those ten minutes however the trails were all quite new to me – a reminder (as if I needed reminding) that there’s always tons of new routes to discover in the Taipei area. 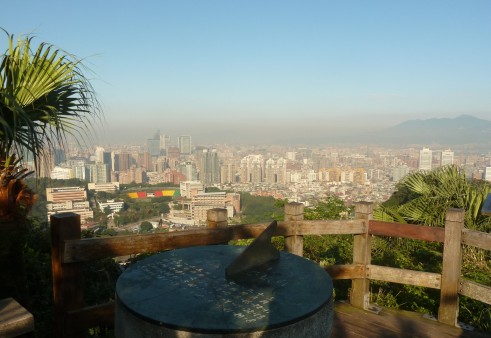 I’ve been meaning to return to the Four Beasts area (the pair of ridges that rise above Taipei 101 in east Taipei) for a while, and as luck would have it, a lack of hikers meant we postponed this week’s weekday hike to the area until Wednesday 28th, which will surely go down as one of the finest-weather days of the entire winter.

The second of five routes up the final cliff; to my great shame I chickened out of this one and walked ten minutes along the bottom of the cliff to the easier (and safer!) route at the far end…

The fifth route (of five) up Nangang Cliff is the easiest, but it’s also great fun to climb, up a long, steep cliff face, topped by this ladder

The hike we did, combining the seven main peaks in this area (the Four Beasts and three higher peaks behind) can be found on pages 114-121.

We were just a small group meeting at Houshanpi MRT station, but the sky was cloudless and the temperature almost spring-like. The Four Beasts is a wonderful area to explore any day (be sure to try to get further than the standard ascent of Elephant Mountain), but today it was a really memorable. There’s nowhere within easy reach of the Taipei MRT network (and actually there’s nowhere in the city, full stop) that approaches this little range of rocky, wooded peaks for sheer variety. From challenging (and fun) rocky cliffs (several are near-vertical and present one of the stiffest challenges to hikers of any trail in the whole Taipei area) to the mass of charming, colorful and occasionally bizarre man-made constructions dotting the wooded cliffs, there’s a wealth of things to discover. 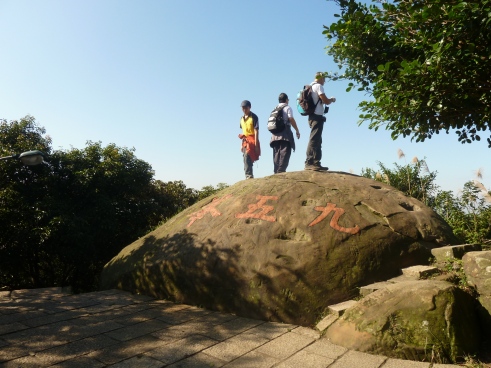 Nine-Five Mountain, the highest point in the hills at a humble 375 meters 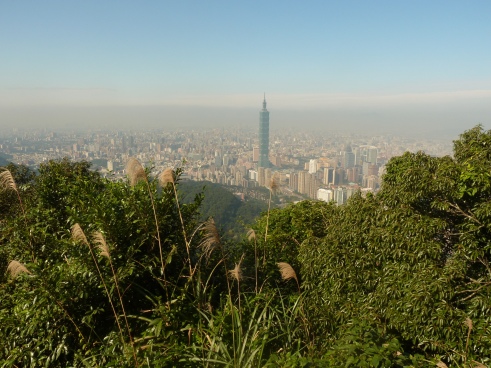 The most famous spot on the Four Beasts: the Big Rocks viewpoint just below the summit of Elephant Mountain (photo taken earlier this year)

Today we basically followed what I like to call the ‘Grand Circuit,’ a 4-5 hour loop combining all seven main peaks of the two ridges that I worked out for Taipei  Escapes 2, but it’s hard to go wrong wherever you hike here – and impossible to get lost – simply head to Taipei City Hall, Yongchun or Houshanpi MRT stations (the last is probably the closest), walk towards the wooded peaks to the south and start exploring. There’s an extraordinary range of curious attractions, natural beauty and trails of all standards here.

Just keep reminding yourself you’re still in the city! 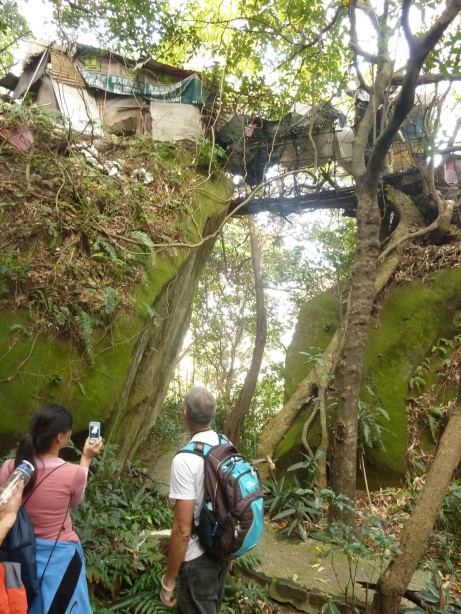 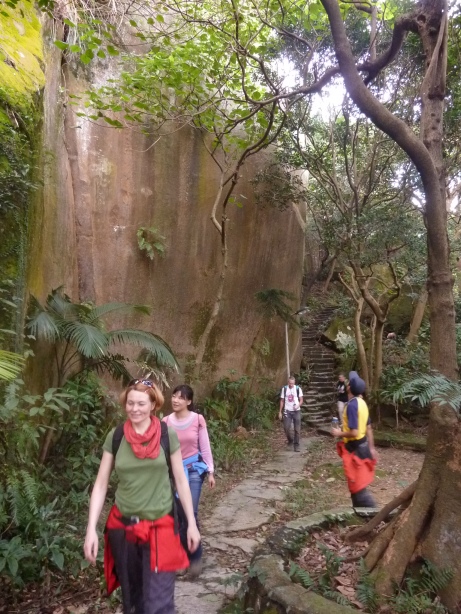 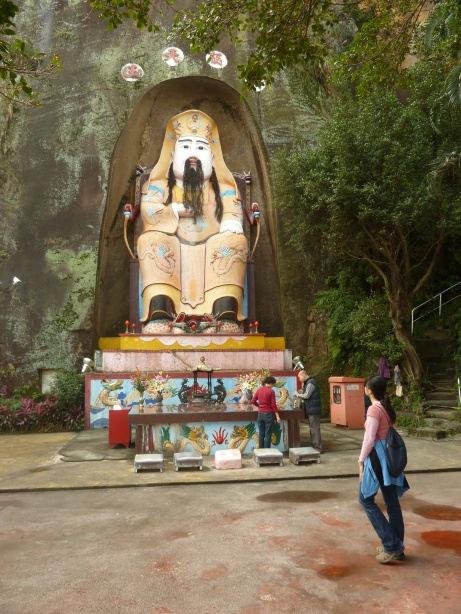 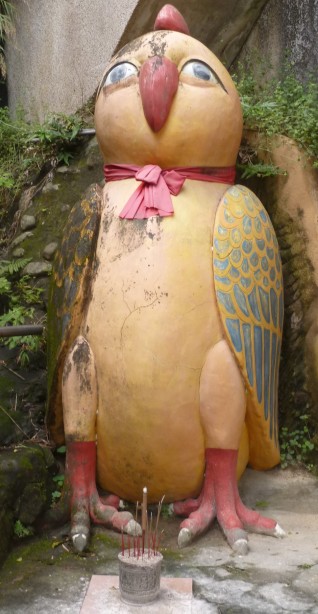 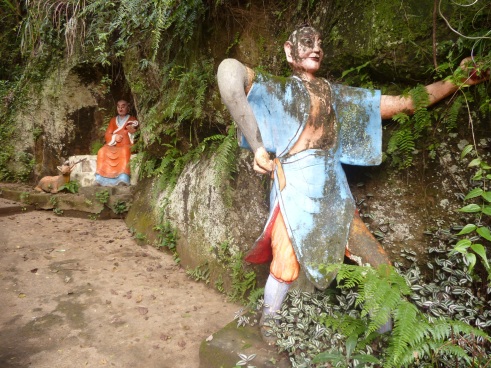 Four Beasts Mountains are easily reached (as I mentioned above) from Taipei City Hall, Yongchun or Houshanpi, and the trailheads are kind-of-signposted from there, although it’ll take a bit of trial-and-error to find them; Tiger Mountain trailhead, in the back of a large temple, is especially tricky to find – take a good map  (or a copy of Taipei Escapes book 2!) if possible.

Silver Stream Cave can be reached from at least three places. The walk I did with Taipei Adventures started at the end of shuttle bus 9副 and 9 區, but these are very uncommon (each only running 2 services in the morning). It’s much more convenient to take (as we did) a taxi from Xindian District Office (about NT$120) to Daxiangshan (大香山), and follow the signs for first U-Theater (the drumming troupe rehearse and perform in a stage in the woods deep in the hills) then to Silver Stream Cave, which the local authorities Romanized directly from the Chinese characters as something like ‘Yinghedong’ which means nothing to most Westerners or Chinese alike.

Taiwan Adventures is a new company set up by Stu and Phil Dawson, Ross Tweedie, and Neil Wade. Apart from leading trips into the high mountains (their Snow Mountain trip is a regular event at the moment) and offering online and iPhone guides to Taiwan, run free day-hikes, easy to strenuous, around the Taipei area.  Click on the link above to get to their website, or here to get to their online Taiwan guide.