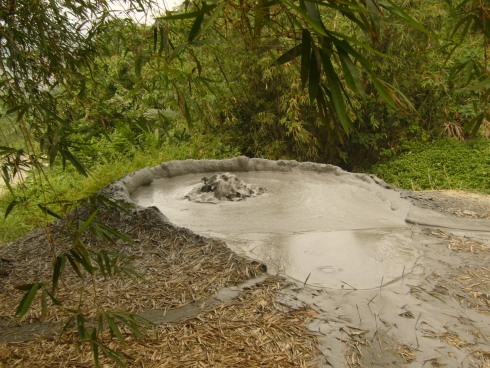 It was a bit of a shock a couple of years ago when a couple of professors at Taiwan University suddenly announced that the volcanic peaks of Yangmingshan (which loom above my apartment window near Guandu) are not extinct, as was generally assumed, but that there is in fact still an active magma chamber below, and the volcanoes may well erupt again at some time in the future. Luckily, they hastened to add, Taipei citizens shouldn’t expect any trouble in the foreseeable future. However somewhere out in the boonies of Kaohsiung, Taidong and Hualien Counties, several volcanoes are very much active, erupting up to several times a year and inundating the surrounding countryside with their all-consuming, liquid contents. Glad to say though that these aren’t malevolent, lava-spewing giants, but another, completely different and much less dangerous kind of force of nature, the mud volcano.

According to Wikipedia, only about seven hundred mud volcanoes are known to exist in about two-score countries around the world (I saw a marvellous and rather big one a few years ago in western Burma). Close to half are in the former Soviet republic of Azerbaijan, but  Taiwan has a respectable collection of its own, mostly in the south, and several are still very much active.

Mud volcanoes are fascinating geological curiosities, but, unless you get a chance to fly to Azerbaijan and see one of the big boys (which are up to 500 meters in height!), the sight can be more than a little underwhelming. Into this category, unfortunately, we have to place the majority of most of those found in Taiwan, unless you’re lucky enough to find one ‘erupting’. The one at Guanshuishan (滾水山泥火山), about 10 kilometers north of Zuoying High-speed Railway station in Kaohsiung, is just a large area of mud, prevented from inundating the surrounding field by a low concrete retaining wall. It’s also a tricky one to find, so you’ll need a good map, and probably have to ask a few locals to boot, to get there successfully.  Liyushan  (鯉魚山泥火山), not far from Donggang (the port for boats to Xiao Liuqiu island) on the northern edge of Pingdong County, is a few notches more interesting, especially since it tends to erupt quite regularly (look at the photos and video in the rather unfortunately placed temple, right in the middle of one of the two main areas of activity for some impressive footage of past eruptions). Unfortunately it had been inactive for many months when we visited, and all there was to see was the yellow, house-like temple, marooned in the center of a huge ‘sea’ of dried, pale mud,  cracked like crazy paving, a small puddle or two – the remains of old vents – and a tiny crater right beside a wall of the temple, where the volcano had suddenly erupted, spewing mud nearly halfway up the wall of the building.

Also worth a visit (if you’re in the area, anyway) is the mud volcano near Tianliao (天寮泥火山), about thirty kilometers north of Kaohsiung city, near the Tainan border.  Although it’s close to a road, on a wooded slope, the signage isn’t very clear, so you need to keep your eyes open. There’s not a great deal to see here except a bubbling pool of muddy water in a shady bamboo grove, but it’s worth a look while visiting the famous Tianliao Moon World (天寮月世界), nearby.

One Taiwanese mud volcano that is most certainly worth going out of your way to visit is Wushanding Mud Volcano (烏山頂泥火山), near the village of Yanchiao (燕巢), about twenty kilometers northeast of Kaohsiung City. Protected since 1992 as part of Taiwan’s smallest nature reserve (less than five hectares in area), the mud volcano is the largest and most impressive of the fifteen or twenty examples found around Taiwan.

To get there, first get yourself to the town of Yanchiao (燕巢), just off freeway one in Kaohsiung County. From here, the mud volcano is signposted, although the way isn’t always clear. A good map of the area will greatly increase your chances of getting to the mud volcano without making a few unscheduled diversions. Head east out of Yanchiao on route 38 and follow the signposts for a couple of kilometers until on the left lies a large car park and (at weekends) a row of stalls selling food and local produce under a large corrugated iron shelter. The entrance to the nature reserve containing the mud volcano is directly opposite.

Before entering the reserve, you’ll have to leave your name, and show some form of identity (a passport or ARC) at the desk set up outside the main gate into the reserve. These formalities over, it’s just a minute’s walk across the tiny reserve until you’re crossing a sea of dried mud to the foot of the main vent of Wushanding Mud Volcano. Although the height and shape of the volcano varies according to recent weather conditions (typhoon rains could wash away part of the come), the mud volcano is a truly remarkable sight. On my visit, it towered, a perfect volcano-like cone, high above the heads of a group who’d been bussed in and were goggling at the spectacle as we arrived while a guide recited its vital statistics over a booming megaphone.

Twenty or thirty meters away across the mud lie two further vents. These mud volcanoes are just babies in comparison with big daddy nearby, but since they are both shorter than the average person, it’s easy enough to look into their ‘craters’, and see the bubbling pool of cool, viscous mud inside.

The ‘crater’ of one of the smaller volcanos

If you’re out of luck and a noisy, megaphone-wielding guide has requisitioned the area (the mud volcano is a popular stop on local tours), take one of the trails that lead off into the forest surrounding the sea of dry mud surrounding the vents. Several other tiny mud pools bubble up at various places beside the trail.

Wushanding Mud Volcano is probably beginning to sound uncomfortably like certain areas of Yangmingshan – crowds of visitors, noisy guides, guided nature-watching walks – but I can guarantee a visit is still richly worthwhile. It’s certainly one of Taiwan’s most unusual sights, and not even the distracting tour groups can spoil a visit to this rare and utterly fascinating natural curiosity.

It’s worth devoting a full day to exploring the area around Wushanding, which is full of arrestingly unusual sights such as the Cockscomb  Mountain, the Yanchiao Badlands formations, and another couple of mud volcanoes. The best is the Yangu (or Yangnyu) Mud Pond (養女湖). The place is signposted – look out for the amusingly misspelt sign on the way:

This pair of deep, bubbling pools of muddy water are actually another mud volcano, producing huge amounts of flammable gas; show up at the weekend and with a bit of luck someone will have ignited the gas, and on fire, the pool is a pretty startling sight. However don’t whatever you do try to set it alight with a match or lighter, as when the pool is ignited the flames leap a meter or more into the air!

Kaohsiung County has the lion’s share of Taiwan’s mud volcanoes, but there are a couple elsewhere, including two excellent ones on the eastern side of the island. Below the tall  and impressive Luoshan Waterfall (羅山瀑布), near Fuli in southern Hualian County, green fields of rice and other crops are inundated by the multiple eruptions of several mud volcanoes. The largest had erupted shortly recently when we arrived, and was still wet and springy underfoot.

One of the Luoshan Mud Volcanos

Somewhat further south, the rather remote Paopao Mud Volcano (泡泡泥火山) is probably the most impressive in eastern Taiwan, and it’s certainly the most fun to visit. You’ll definitely need a good map (and preferably a car with high clearance) to get to this place, high up in the hills of Taidong’s Coastal Mountain Range above the town of Gwanshan (關山). 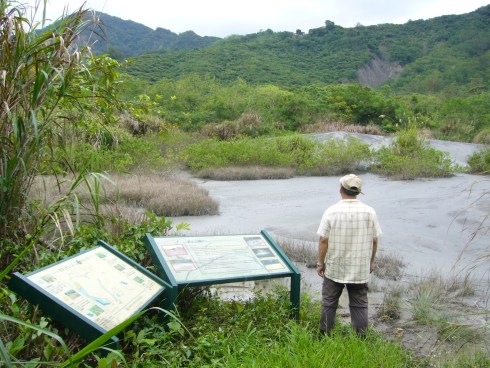 A narrow, rutted lane, beginning about ten kilometers south of the town climbs into the hills, and after about four kilometers, as it appears to be going nowhere, a right fork (a large ‘NO ENTRY’ sign in Chinese, half covered in undergrowth is a dead giveaway) leads to this protected reserve.

It’s a 20-30-minute walk along the trail to the edge of the mud volcano, which has swallowed up a large area of vegetation laying in a bowl in the hills, which  alternate between lush undergrowth-covered slopes and bare, crumbling Badlands landscapes.  It’s as strangely, curiously a compelling sight as any I’ve seen on this extraordinary island, and that’s saying something!

14 thoughts on “The Mud Volcanoes of Southern Taiwan”