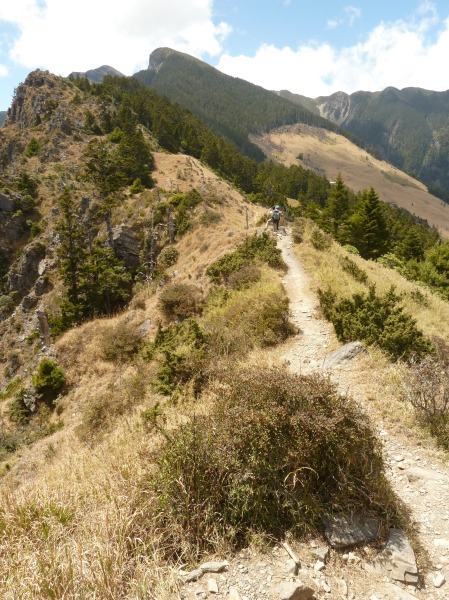 The one thing I absolutely detest about Taiwan (sometimes at least) is the damn weather here! Lousy conditions have turned many a promising hike into a wet and slippery trudge, have led to me cancelling scores of others, and  (three or four years ago) even contributed to my avoiding high mountain climbs for several years, after a miserable three-day trip into the mountains when a group of us were stranded in a cold, damp mountain hut for the duration of a continuous downpour that lasted a day and two full nights!

The trailhead, above Wuling Farm

The weather in early spring, especially, seems to be particularly dicey for hiking Taiwan’s highest peaks. My first attempt on Snow Mountain, nearly a decade ago, was at this time, and ended at the tiny weather station in the cirque below the summit, when the group I was with suddenly declared we couldn’t continue because we didn’t have crampons to deal with the compacted snow. (Quite why no-one prepared them is beyond me, because it was February, but that’s quite a different story).

At the base of the Crying Slope

Fast forward to last weekend – near the end of March – and my second attempt. At first the weather forecast hinted at great things, and then three or four days before starting, ominous reports began airing on the TV news about a short, sharp front that would hit Taiwan on Saturday (our proposed summit day!) and just as suddenly leave the island the following day.

And they were basically right….

The Crying Slope in bright sunshine, on day one

Conditions that can be a nuisance on low-altitude hikes can easily turn into a miserable or even dangerous experience in the high mountains. Our ambitious three-day plan was to climb the usual (main and east) peaks of Snow Mountain, together with the North Peak and a separate eminence called Mount Zhijiayangda (志佳陽大山). It wasn’t exactly miserable, but near the summit of the main peak, conditions (as in gusts of gale force wind) were dodgy enough to prevent me – for the second time – from bagging perhaps the most popular high summit in Taiwan. I’m now one of the few keen hikers I know of who’s yet to reach the main peak of Snow Mountain, and that after a pair of attempts!

Snow Mountain is probably one of easiest high peaks in Taiwan to climb, but while it’s a pretty easy trip compared to many of Taiwan’s high peaks, it’s worth mentioning that it’s a notch or so more difficult than Yushan (Jade Mountain; which is amazing, considering that Yushan is the highest mountain in northeast Asia), with a steady climb all the way up.

So many people have climbed Snow Mountain that there should be loads of info out there in English by now (check out Stu Dawson’s accounts on his blog, Hiking Taiwan, for instance), but to document my latest unsuccessful attempt, here’s my five-cents worth – a brief rundown of the main peak route.

Once at the trailhead (arranging transport beforehand up here will avoid a longish road walk from Wuling Farm), it’s a fairly gentle zigzagging climb of perhaps 90 minutes to Chika Hut, from where the going immediately gets a bit steeper. It’s a steady zigzagging climb of 2 hours or so from here to the wooden viewing  platform commanding a panorama over many of the area’s 3,000-meters-plus peaks in fine weather. Above is the so-called Crying Slope (哭坡), although both times I’ve found it a pretty simple  climb, after the longer slog up from Chika. 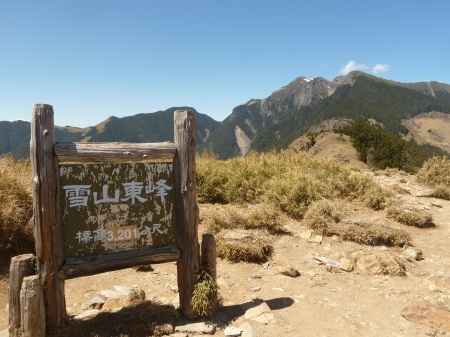 The summit of Snow Mountain, from the East Peak – if only this fantastic weather had continued one more day!

Once at the top, it’s only 30 minutes to Snow Mountain East Peak (雪山東峰), with its fabulous view over Snow Mountain main peak and grassy Mount Zhijiayangda in one direction, and the Wuling Four (武陵四秀) in the other, with the extraordinary contorted strata lines of the Mt Pingtian (品田山) cliffs catching the eye.

After a further hour of gently meandering along the grass and wood-covered mountain slopes, the trail reaches the comfortable Sanliujiu (3-6-9) Hut and the end of the day’s hike.

Approaching 369 hut, at the end of the first day

From here (at the beginning of day 2) the trail zigzags up steep grassy slopes, past the remains of the White Forest, whose bleached white trunks (the result apparently of a fire), once so eye-catching, are now being covered with new vegetation  and are often missed. Just after the White Forest comes the magical Black Forest (黑森林), where we saw samba deer, and almost got knocked over by one which came bolting downhill at top speed, straight through our group, pursued by a stray dog which had accompanied  some other hikers up here from Wuling Farm.

It’s a lengthy walk through the beautiful forest of pure Taiwan Pine, later gaining in altitude, but the woods are both enchantingly lovely and provide welcome shelter from any inclement weather that may be raging above. 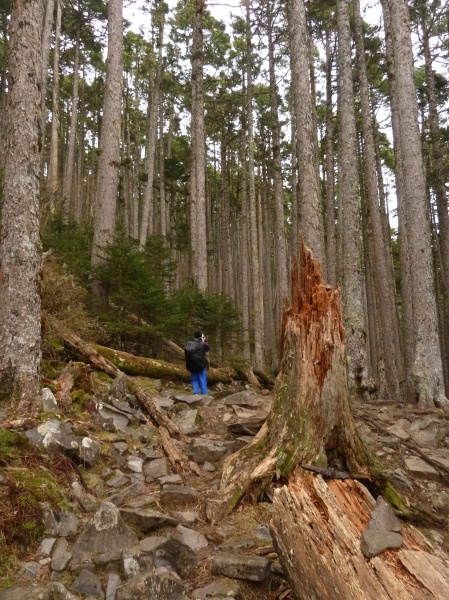 In the Black Forest

Emerging from the Black Forest, the trail is cut into the scree on the side of the huge glacial-cut cirque below the main summit, climbing steadily to a tiny white weather-recording apparatus, then veering left to climb stiffly along the precipitous, scree covered slope to the summit itself. This last bit is positively dangerous in snow unless you have crampons (and we – stupidly – didn’t bring them – again!), so be sure to bring them if coming any time in the year before April. It’s also very dicey in strong winds, especially if, like us, you’re carting a full-sized, heavy backpack  to the summit. Our original plan – to cross the summit and descend the far side to Mount Zhijiayangda, was foiled by the terrible conditions and by ice which apparently still lay on the steep scree slope that forms the first part of the descent to Zhijiayangda.

So once again I didn’t make the summit – stopping a couple of hundred meters short!  On Snow Mountain though, it’s much more about the journey there than about bagging another of the Top 100 peaks. For sure, it would be great to add another to my humble collection of summits, but Snow Mountain ranks close to Mount Nanhuda in terms of sheer beauty, and this alone makes the trip richly worthwhile!

Morning at the trailhead