The temple on top of Mount Heng, at dawn

Of all the six mountains and scenic areas we visited on our summer hiking trip around China this year, Mount Heng (衡山; the southern peak of China’s five sacred Daoist mountains, and not to be confused with the other Mount Heng, near Datong in Shanxi Province) gave us perhaps the biggest surprise.

The summit of Mount Heng

Rising above the town of Nanshan (南山), a couple of hours south of Changsha (the capital of Hunan Province), Mount Heng (1,290 meters) is a mere hill by comparison with just about all the other mountains I’ve climbed during my numerous visits to China. There’s even a road to the summit! That degree of accessibility is actually not so unusual in China, where the authorities often seem hell-bent on opening up everywhere to the maximum number of (fee-paying) tourists. The little town atop Mount Emei (now that’s a real mountain at well over 3,000 meters in height!) comes to mind, with its crowds of day trippers who came up on the bus/cable car  combo, doing in an hour or two what it took us hikers 8 or 9 knee-crunching hours to achieve.

Mount Heng is (by Chinese standards) such a mild thing that it would be easy to shrug it off as unworthy of a visit when there are so many far more spectacular sights within a day’s bus or train ride screaming for attention.

Dawn on the summit

Big mistake. Sure there’s hardly an exposed rock to be seen, no yawning precipices and not a single stunning pinnacle to gape at, yet while it’s hardly spectacular there’s something about the rolling, wooded heights of Mount Heng that’s oddly compelling, and I’m certainly very glad we devoted two days to heading out there on our way westwards. It has a quiet beauty about it that is very appealing, if only to serve as a foil to all the mind-bogglingly spectacular scenery on display at nearby places like Zhangjiajie and Huangshan.

The temple at the top of the mountain

Much of the credit for the success of our overnight stay on the mountain was due to one of those happy pieces of serendipity which seem to happen with surprising regularity while travelling. Arriving by bus in the big, rather ugly and utterly charmless town of Nanshan in the full heat of a July day, we headed straight for what we assumed was the nearest hotel, only to find it was nothing more than one of those large, showy and tasteless banquet restaurants that seem so beloved of Chinese tour groups. Once inside, however the staff quickly made hay with our mistake and ensnared us, saying that their laoban owned a hotel on the mountainside and would come down to pick us up and take us out there for a look. The four of us were too hot and too tired to refuse, and resigned ourselves to our fate.

Good thing we did! The ‘hotel’ turned out to be a small and exceedingly quiet place deep in the woods on the side of the mountain. Apart from us and the family/staff that lived there it was empty, and they treated us like we were part of the family, lending us the washing machine to do our mountains of washing, and pointing out a trail to a nearby waterfall, which made for an attractive afternoon stroll.

My original – and rather daft – idea of climbing the mountain that sweltering afternoon was immediately scrapped in favor of hanging out around the hotel, which had such a relaxed and friendly vibe that it was hard to believe we were still in China. 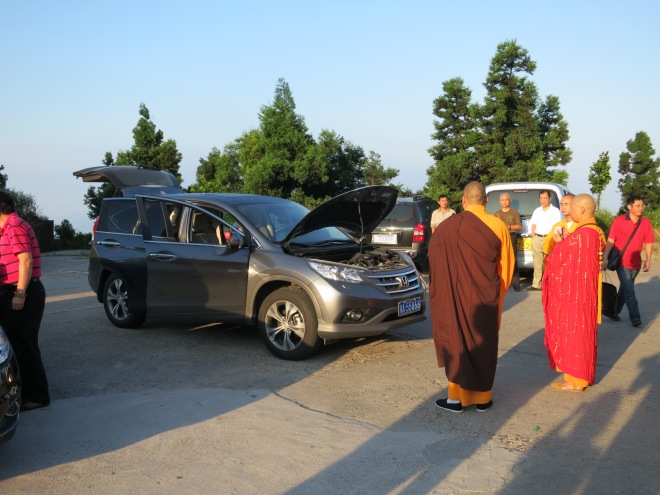 A car-blessing ritual at the summit

The following morning we were up at 5 am, and followed the stone path that climbs the mountain, cutting off much of the 9 kilometer road that zigzags from our lodgings (at the head of the Fanyin Valley) to the temple at the summit of the mountain. It’s attractive enough, winding through the thick woods, and when it finally gives out and there’s no alternative to the road, broad views over the wooded hills in the pre-dawn made the walk pleasant enough.

We arrived at the beautiful temple at the summit after 2 hours’ or so hike, just as the sun rose over the distant hills, bathing the temple’s stone walls in a rich orange light. It was a magical sight, made even more memorable by the early risers already praying inside. Mount Heng, it seems, isn’t a madly popular sunrise-viewing spot, and was refreshingly free of the huge crowds that are so hard to escape – even at the crack of dawn – at China’s more renowned scenic areas. 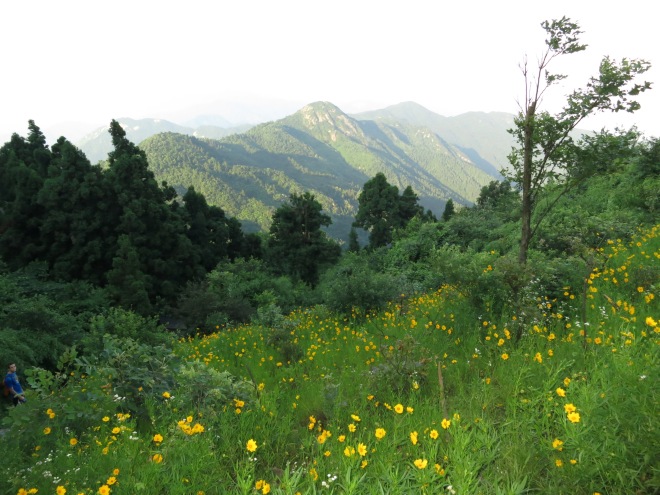 In contrast to the spectacular cliffs of most famous Chinese mountains, Mount Heng has a gentle, almost pastoral landscape

As we started back down the road on the long descent, we passed a pair of cars in the road, bonnets wide open, being blessed by Daoist priests in all their finery; a fitting end to our experiences on a Chinese mountain where spectacular natural beauty takes a back seat to a fascinating cultural life that, it seems, survives in China still.

Mount Heng was the perfect reminder – as if I needed it – that in China the one thing you can be sure of is that travelling in this country you never quite know what’s going to happen next ….