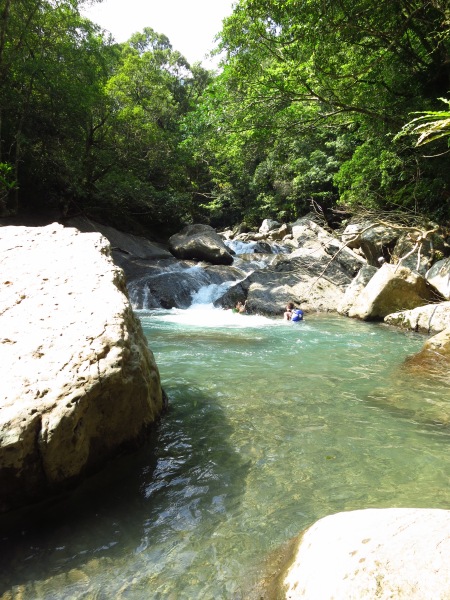 The two dry (land) routes to the water slide and nearby swimming hole are described on page 156.

[Update: the Jiajiuliao Stream was devastated by floods and landslides during Typhoon Soudelor in August 2015. The stream can still be traced, but the pools, the waterslide, and most of the beauty, are all sadly gone, for the forseeable future at least].

I absolutely, truly believe there’s no better place to spend the Taipei summer than knee-deep in the cold, clear and pure waters of one of its more scenic rivers, tracing upstream amid the fantastic landscape that seems to … well … grow on trees around here. I’m still a newby at river tracing, and although  I bit off a bit more than I could chew in my first attempt at river tracing at the Golden Canyon in Hualien (…must work on that upper body strength a bit before I go back there again)  I’m eager to learn the ropes, so to speak, and Taipei’s much, much easier spots are both the perfect place to learn, and almost as magical as the bigger, more dramatic and physically demanding traces such as the G.C., down south.

The natural water slide on the Jiajiuliao Stream looks a bit nasty at first, but it’s great fun and – I swear – surprisingly gentle to unprotected butts and backs! 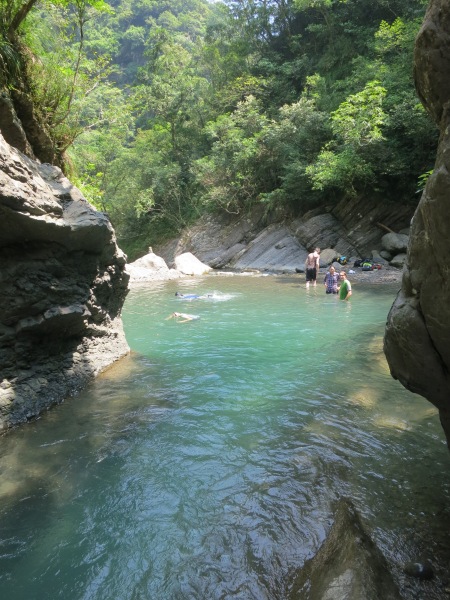 The wonderful natural swimming hole on the Jiajiuliao Stream, much enlarged since it was dammed up following – I suppose – a typhoon a couple of years back

River tracing is exactly what we’ve been doing over several summer weekends since I returned from China, making a couple of memorable return trips to the various beautiful river tracing spots near Wulai; now the weather is turning cooler, it looks like river tracing is off the cards for another year, but come next June, there’s a couple ofl spots I’ll definitely be returning to, and plenty of new places I’ve already made a mental note to try.

Heading upstream from the swimming hole… 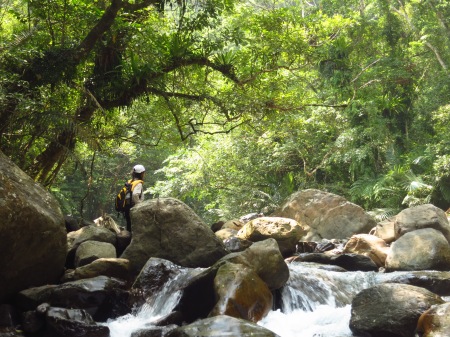 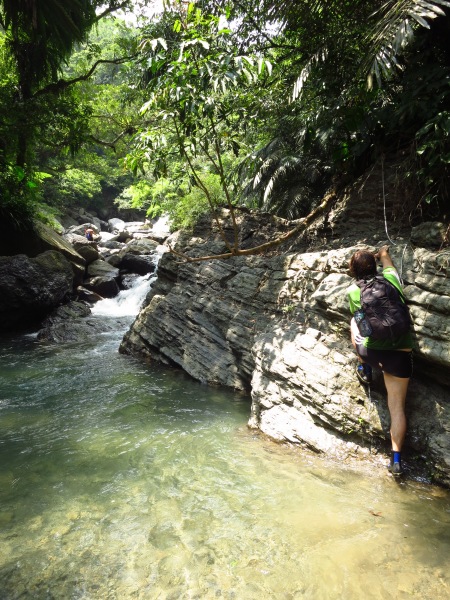 Above the swimming hole, the way becomes a little less easy in places, with a few fun bits, but nothing difficult

The Jiajiuliao Stream, a couple of kilometers north of Wulai, is probably the best-known river tracing site in the Taipei area, and a fabulous watery outdoor playground during the scorching summer months, so it’s hardly off the beaten track, yet I’ve various poor excuses for never actually getting around to tracing this enormously popular stretch of river until about six weeks ago. I’ve always reached the wonderful natural swimming hole at the top by either of  two trails that contour the side of the valley, but there’s absolutely no substitute for getting wet and wading upstream to it. The river trace is very easy, and short (we did it in just over an hour) but is it scenic or what? 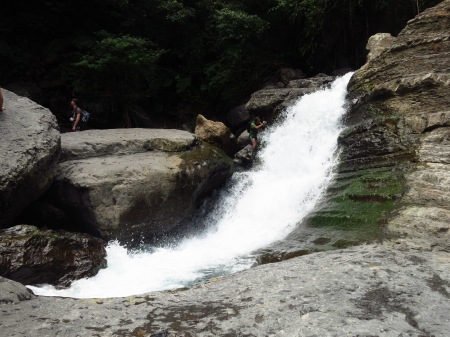 A powerful small waterfall makes access up the Jiajiuliao Stream difficult or impossible, except at low water

At the top is the amzing natural waterslide. It’s a bit intimidating at first glance (especially if, like us, you don’t have the protection of a wet suit and buoyency aide), but the rock is almost miraculously smooth and gently curving all the way down under that torrent of frothing white water, and after several rides, I can truthfully report that it’s safe to slide down unscathed wearing no more than a T-shirt and swimming trunks. Above the waterslide is the magnificent waterhole, which I was amazed to find has grown to more than twice the size it was just a couple of years ago, thanks to loads of shingle and sand which now blocks the flow downstream, probably thanks to a typhoon. 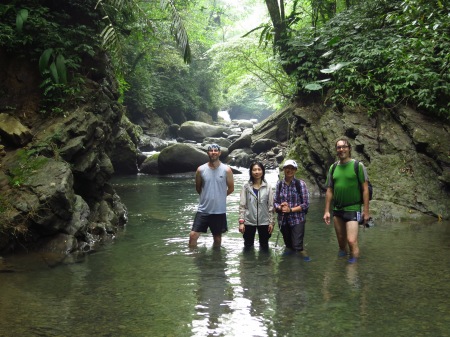 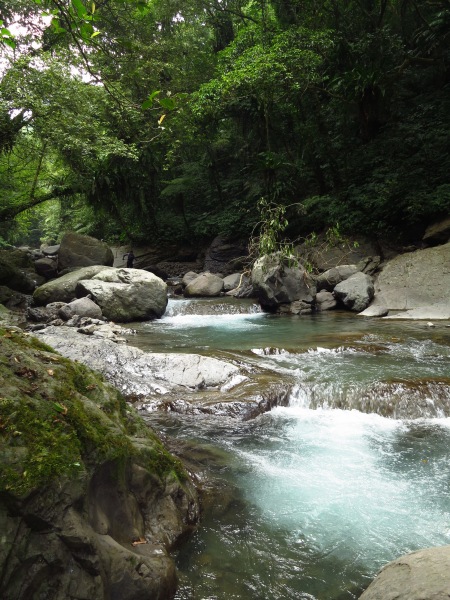 About my only grumble with this place is that the river trace is so very short, and unless you take it really, really slow, and spend lots of time relaxing and mucking around on the way up, there’s a real danger of having done everything before the morning is nearly over. Luckily, there’s more river to trace, and if anything it becomes even more scenic above the natural swimming hole. It’s 30-40 minutes upstream to a smallish but powerful waterfall, thundering over a rocky ledge and often blocking the way upstream. On our second recent river tracing trip here, however, the water was pretty low, and a secret ‘cave’ (usually filled with falling water) opens up to the left of the waterfall, with a small ‘chimney’ through which it’s pretty easy to climb and access the enchanted, hidden gorge above.

With most of the afternoon still in front of us,  we combined the delights of the Jiajiuliao swimming hole and water slide with the ‘other’ swimming hole, just an hour or two away, which we’d discovered last year, thanks to a tip-off from a friend, and were happy to find seems as little-visited and pristine as ever. Wulai has some awesome river tracing spots, but spending an afternoon at this exquisite stretch of river gorge is currently my very favorite thing to do during the Taipei summer. Roll on next year…. 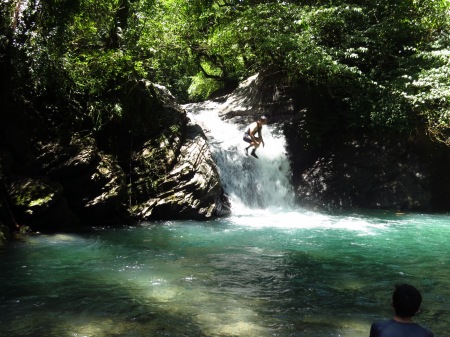 3 thoughts on “River Tracing at Wulai – Take Two (and Three…)”