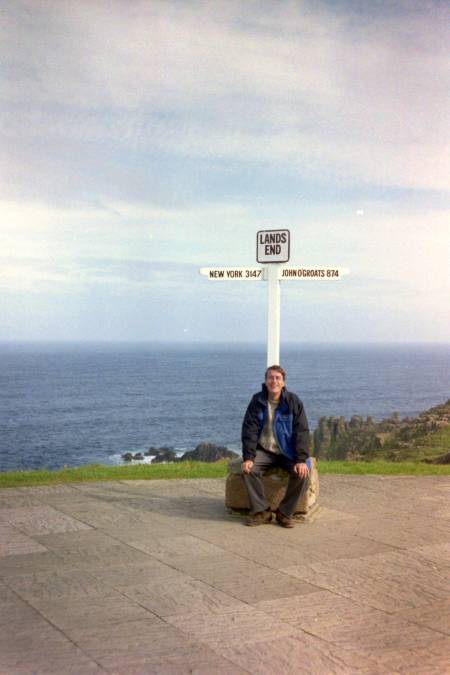 It’s been 12 years since I did the Big Walk (in the year 2000), but while at my other home (in England) over the Christmas holidays this year, with little to do but practice my (electric) piano and eat far too much junk food, I’ve been trying to keep busy by looking back through my old photos and journals. While Christmas shopping I also found a gadget to digitize all my old color print negatives, and so have spent much of the last week converting all the photos into Jpegs. That handy little negative scanner also finally allowed me to get some of the gumf I collected in preparing for my cross-Britain walk into an on-line version, in case it’s of interest for anyone else considering doing all or part of this epic walk.

There’s no single, established Land’s End to John O’Groats route – most people piece together their own  from the vast possibilities among the network of roads and public footpaths between the two points. It’s also  more commonly done by cyclists than by walkers, because, with the most direct route between the two points (which form the southwestern and northeastern tips respectively of the mainland British Isles) spanning 880 miles (1,400 kms), it’s a lot of ground to cover, and not many walkers can afford to take two-to-three months off work! The direct routes are hopelessly dull for slow-moving hikers, as they mostly follow roads, so  using Ordnance Survey maps I pieced together a route linking some of the finest British Long-Distance Footpaths with my own long-distance link-routes using public footpaths. Once I’d figured in as much as possible from my wish list of long-distance paths: the whole of the magnificent Pennine Way, the northern half of the Southwest Coast Path, half of Offa’s Dyke Path, the West Highland Way etc, I’d come up with a route far longer than the direct one – 1,292 miles! After adding in a couple of detours (to the ceneters of villages or towns for the night and back again, to the top of a couple of mountains en route, including – of course! – Ben Nevis, the highest point in the British Isles), the final tally worked out a bit more still – 1,321.75 miles, over 96 days. It’s still one of the best things I’ve ever done, and I’d love to do a similar walk again. In fact I’ve already drawn up an (even longer) route along the opposite diagonal, from Dover in southeast England to Durness and Cape Wrath, the northwesternmost tip of Scotland – hope to be doing that in a couple of years! 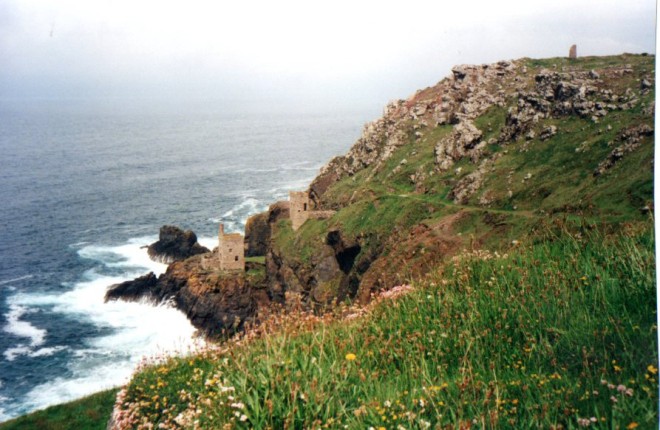 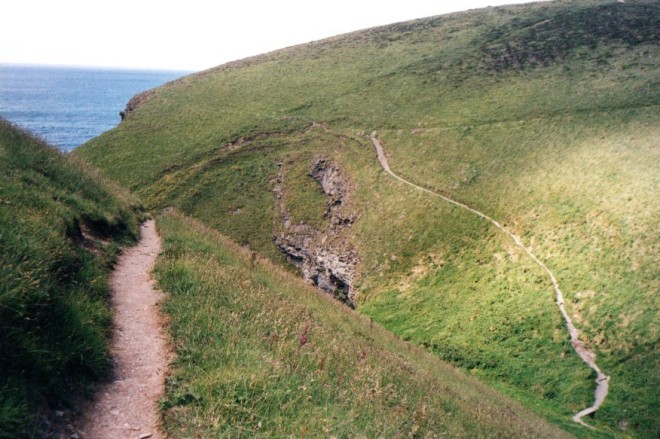 The walk was in aid of the charity Diabetes UK, and to keep my sponsors up-to date on my trials, tribulations and occasional triumphs during my journey I wrote letters which Dad typed into the computer and sent off in batch emails. Luckily I still have a copy of them all, and together with some of the photos I took during the walk they retell the trip much better than I can now, a decade after the trip, so I left them as I wrote them, only tidying up some of the more embarrassing grammar  and spelling mistakes…. Those photos were taken well before I had much idea what a digital camera was, much less owned one, and these photos are scans of prints taken on the trusty Olympus Trip that I took on all my many adventures in Britain and elsewhere in world during the 1990s. Unfortunately the camera got damaged in southern Scotland – somewhere around Glasgow, and I ended up with a much cheaper machine, and many poorer photos.

Just a quick note to say I start off for Land’s End tomorrow (Monday 5th June, by car). The walk will begin on 8th. June and hopefully end about 99 days later (on or around September 14th) at John O’Groats in the north of Scotland. I’m sorry I can’t write to everyone individually, there’s just too many of you!  I’ll let you know what’s happening a week or so into the walk,if you need to get in touch, I can still be contacted at this e-mail site. 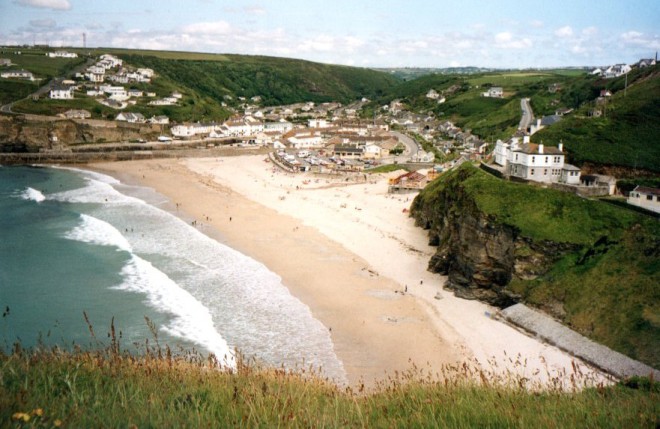 Perranporth Youth Hostel (on the cliffs), my destination on day 4

Sorry I can’t write to you all individually, but that would just mean too many letters, but I wanted to let you know how my three-month walk was progressing, so here goes…

So far it’s proved slightly easier than I feared, walking the Southwest Coast Path, which I will follow for the first 18 days (about 240 miles) of the trip. It’s well-known as being very strenuous in parts, but until 2 days ago the worst problem was the weather – mostly thick mists and drizzle, clearing the in afternoon with sunny patches, plus some strong winds.

Day 6 suddenly became much harder and the last 2 days have been quite tough – constant, very steep ups and downs, and yesterday the fog was so thick I couldn’t see any of the fantastic scenery. I might as well have stuck to the much easier walking along the road!

The scenery though is quite superb! I’d recommend anyone to walk some sections of the route; you simply will not find more beautiful and magnificent coastal walking anywhere! SOme amazing rock stacks, natural arches, huge, overhanging cliffs and a series of collapsed caves: landlocked craters with vertical sides sometimes 250 feet deep, with the sea boiling through the natural arch on the seaward side. Fantastic stuff.

Another couple of tough days ahead (today was the first ‘rest’ day)then hopefully easier walking through Devon and Somerset as I slowly head for Wales.

I’ll write again from Glastonbury in about 10 days. Til then, enjoy the summer weather, now it’s here.

Now taking a day’s break in King Arther’s Glastonbury, missed the Glastonbury Music Festival (as seen on British TV) by 3 days, but still took a welcome day off. This stage has ended more easily than it began. Back on day 9 leaving Boscastle, the mind was willing but the body was beginning to fail. I had a strained ankle, and some tough coastal walking with lots of steep climbs and descents. Taking it easy the ankle held for a while but by day 13 upon reaching Barnstaple, I had a painful right ankle and a left knee giving me terrible trouble. I took 2 days rest at Barnstaple before attempting to walk again, followed by 2 or 3 frustrating days of walking, not being sure if I would be able to continue or not. However I have slowly regained strength and confidence, helped by having now reached the easier inland terrain of Somerset. This stage started with fantastic wild seascapes with cliffs up to 600 feet high and sweeping beaches. Moving inland I crossed a high moorland plateau covered in flowering heather, before moving off the Quantock Hills down to the low-lying flat Somerset Levels. Down here on the Somerset Levels swans glide along the drainage dikes and water lilies blossom on the still water. No more serious problems with my feet; the main hassle has been some atrocious footpaths (barbed wire obstructions, head-high stinging nettles in one place and two groups of angry cows who took a dislike to me). Day 24 I walk via Wells to Cheddar Gorge, and then on to Bath. If all goes to plan day 29 will see me crossing the Severn Bridge to Chepstow – bye-bye England – hello Wales – I can’t wait.

The Valley of Rocks, near Coombe Martin on the North Devon coast (day 17) 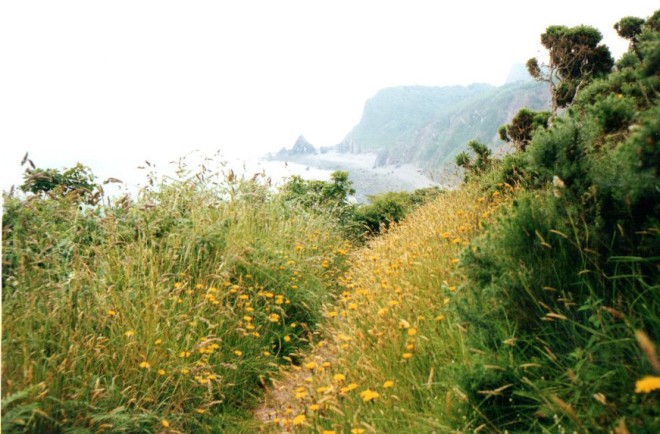 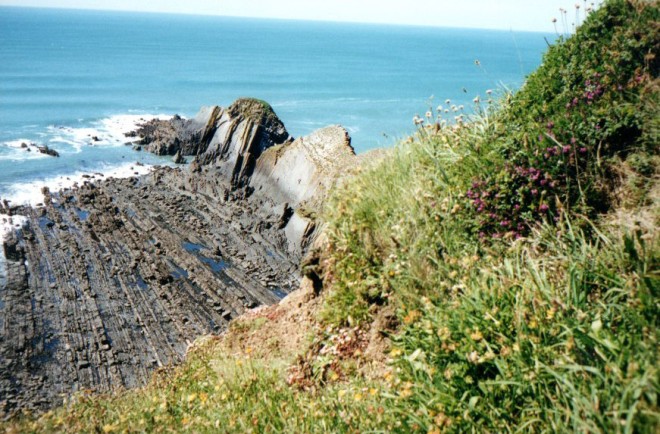 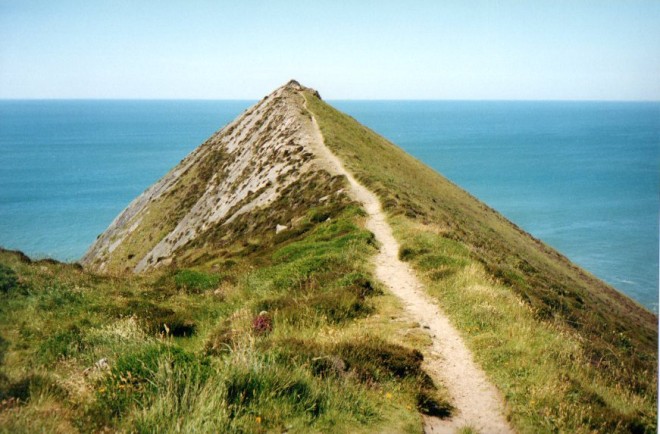 One thought on “Land’s End to John O’Groats: Across England, Wales and Scotland on Foot (1)”