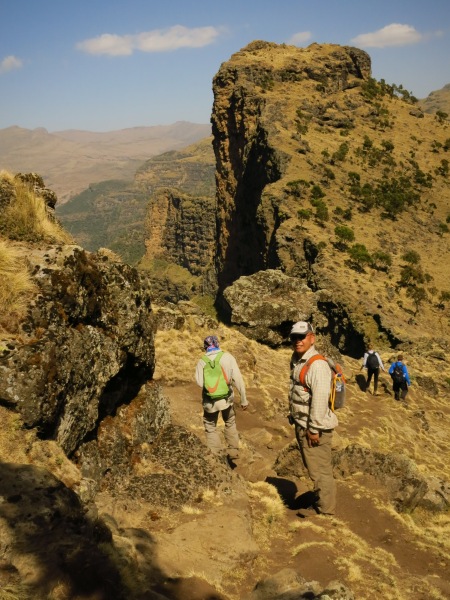 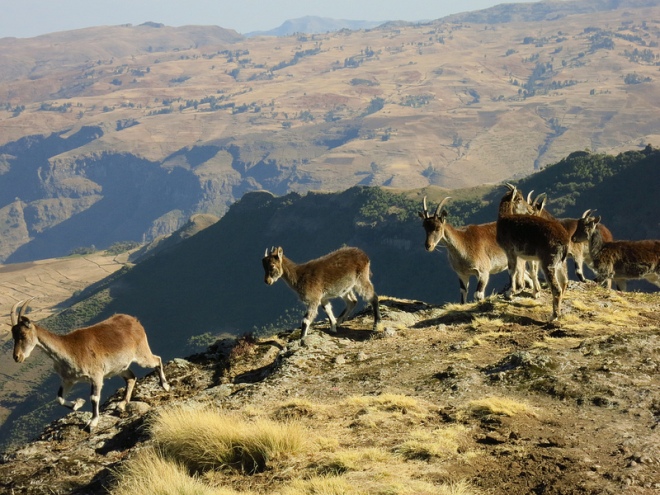 The summit of Inatye (4,070 meters), the highest point of our four-day hike

Kilimanjaro, Mount Kenya, the Otter Trail, Toubkal: Africa has some incredible hiking; sad to say I’ve done none of them yet (although I did make it half way up Toubkal many years ago).     Add to that list the Simian Mountains in Ethiopia. Ethiopia doesn’t immediately spring to mind as prime hiking country, yet although well-known these days for the incredible rock-hewn churches of Lalibela (a popular candidate for the ‘Eighth Wonder of the World’) and as the alleged site of the Arc of the Covenant (said to contain the Ten Commandments: remember it from the end of Raiders of the Lost Arc?), it has two world-class trekking destinations. 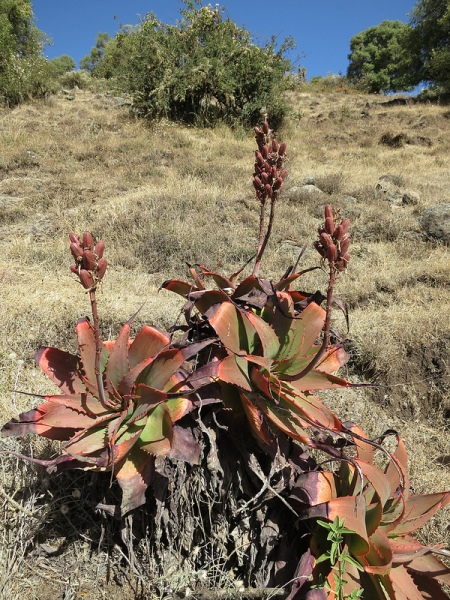 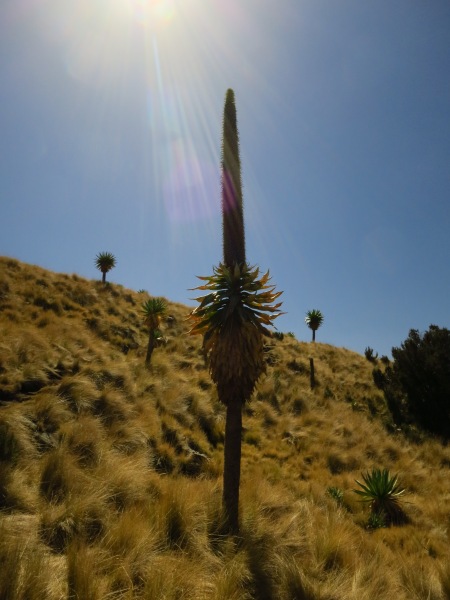 The first, the Bale Mountains in the south of the country, would be a popular magnet for hikers in almost any other African country, since  (apparently – I haven’t been) they offer magnificent scenery along with a good chance of seeing a variety of very rare endemic mammals.  Ethiopia, however, also has the spellbinding Simian Mountains, which not only offer possibly the most jaw-droppingly spectacular scenery I’ve ever seen (think vast, vast panoramas from the brink of incredible vertical cliffs which must be at least eight or nine hundred meters high in places), but also happen to offer easy, simple multi-day trekking and lie just two hours from one of Ethiopia’s most popular tourist towns. 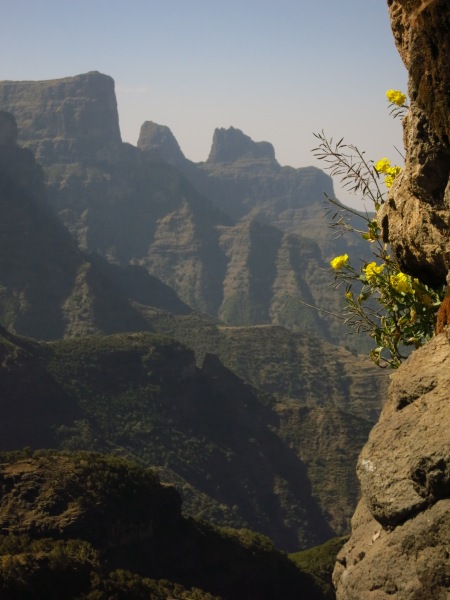 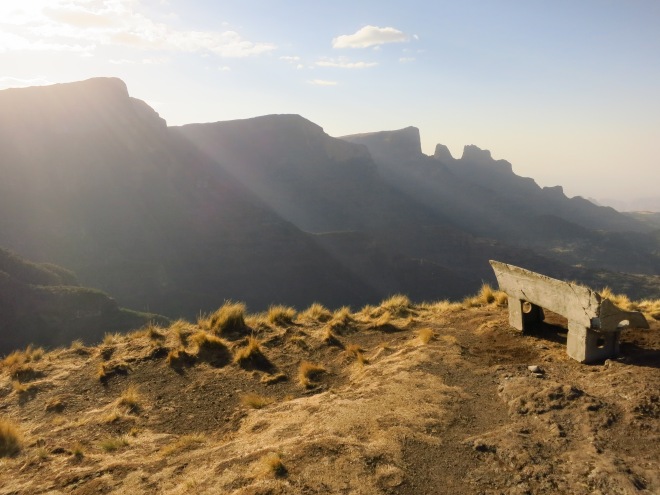 Before sunset at Chennek (day 3)

Gelada baboons are absolutely fearless of humans, and will allow you to come right up to them!

Thanks to recent improvements in the road, the entrance to the Simian Mountains National Park lies just two hours from Gonder, one of the four main stops  in Ethiopia’s prime tourist attraction, the so-called ‘Historical Circuit.’ This is a huge loop of over 2,000 kilometers linking the capital, Addis Ababa, with the ancient capitals of Axum, Lalibela and Gonder, plus the newer city of Bahir Dar, on the banks of vast Lake Tana in the northwest. The Historical Route is the backbone of most visitors’ first trip to this utterly astounding country.

Around Imet Gogo (on the morning of day three), the scenery, which has been amazing all the way, suddenly rises several notches and starts becoming truly mind-boggling… 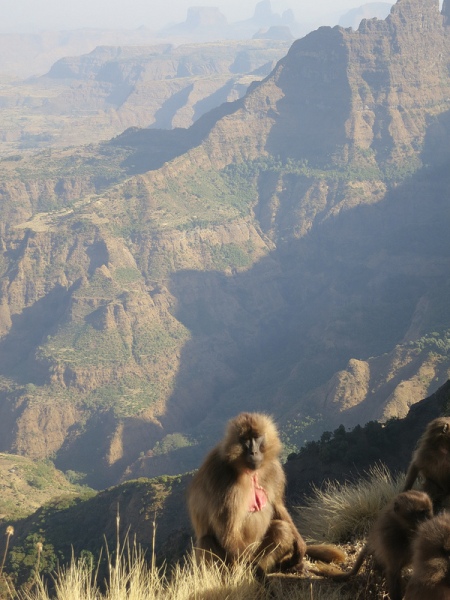 We were in Ethiopia for just three weeks (not even close to enough!) but managed to fit a four-day trek in the Simians into our schedule.  How to describe the place? One thing that constantly surprised me is the glaring gap between the universally ecstatic reports of this place and uniformly underwhelming photos of the place  that are posted up on the Net. Yeah, it looks impressive, but that old truism that great places never look nearly as good in photos as in real life is only too true here. The Simian Mountains are the full deal – incredibly spectacular scenery, rare and enchanting endemic wildlife, a friendly and endlessly fascinating people, and a smidgen of the country’s extraordinary, time-warp culture (although you’d be better visiting Axum, Lalibela or the rock-hewn churches of Tigray for example  to experience the full force of Ethiopia’s  spellbinding cultural uniqueness: in some places it feels like a film set for some movie set in Biblical times).

The endemic Walia ibex are supposedly extremely rare (now found only in the Simian Mountains), but a herd calmly hovered on the edge of the camp at Chennek the evening we arrived, and seemed none too shy as I cautiously approached 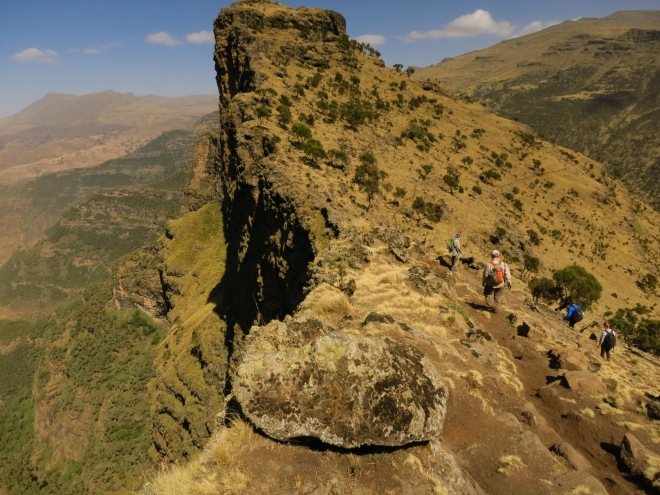 More amazing views from the escarpment en route to Chennek 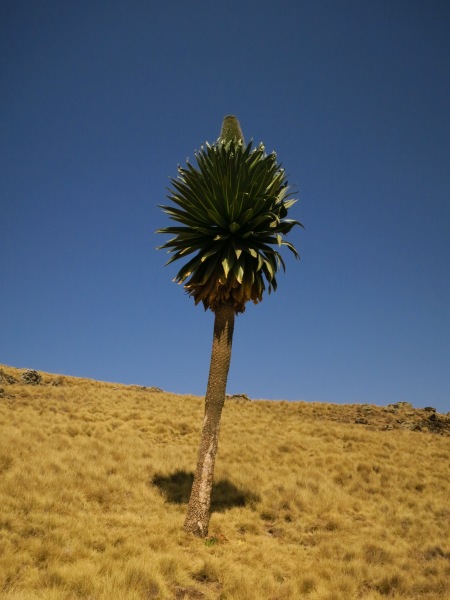 Giant lobelia plants punctuate the route between Geech and Chennek

The Simian Mountains reach their highest point at Ras Dashen (4,543 meters) which is variously described as the fourth or fifth highest mountain in Africa (its exact height varies, according to which map you look at). Getting to the summit (which is outside the National Park border) and back takes a full week or more, but, for once, the highest point doesn’t form the focal point of most Simian Mountains trekkers’ itinerary. It’s generally agreed that the best scenery in the Simians lies  on the popular 3-5 day trekking route that lies completely within the National Park boundary, and it’s hard to believe anyone doing that could be less than gobsmacked by the stunning scenery almost all the way. Add to this the fact that this is one of the simplest, least strenuous high  mountain treks I’ve ever done, and the Simian Mountains are an absolute winner. As a rough guide, among other treks I’ve done, the level of difficulty (or ease, really) of the popular 4-5 day Simian loop trek is similar to Yushan or Snow Mountain in Taiwan, a good bit easier than the Inca Trail, a great deal less tiring than Kinabalu, and an utter walk-in-the-park compared to the painfully strenuous (and muddy!) 6-day Central Circuit of the Ruwenzoris (or Mountains of the Moon) in Uganda (which includes Africa’s third highest mountain, and is sadly the only other real trek I’ve done in the Dark Continent to date). 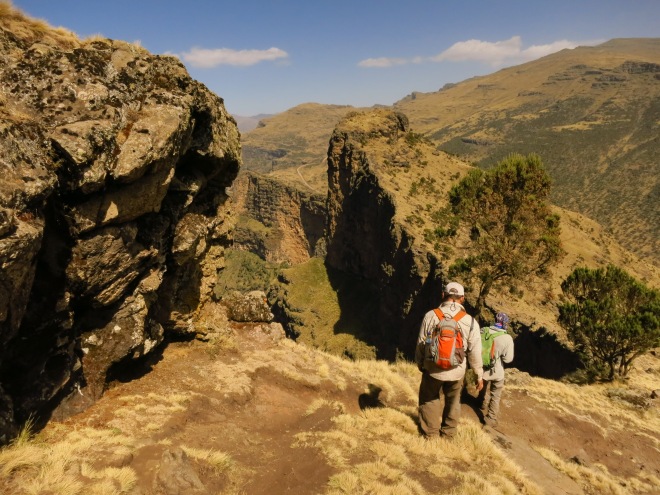 The sheer face of Inatye (day 3)

Near the summit of Inatye

Anyway, the Simian Mountains are an absolute must-do for any self-respecting trekker if they’re in Africa. Think of it as a relaxing postlude to a climb up Kilimanjaro, Mount Kenya of the Ruwenzories, or just book a flight to Ethiopia and spend as long as you can just exploring the country. I’m prone to exaggerating on occasion, but I’m not over-stating things by saying that my recent three-week trip to Ethiopia was probably the most amazing, adventurous trip I’ve ever done. It’s that good.

On the ascent to Inatye

Once you’ve got yourself to Ethiopia, it’s dead easy! Travelling around Ethiopia is pretty simple by African standards, and any traveller who’s explored independently a few other third world countries and thus knows the basic ropes should have no major problems. People there speak English, transport connections are improving all the time, and it’s really cheap.

Day one: en route to Chennek

At the viewpoint over the spectacular Geech abyss (Day 2) 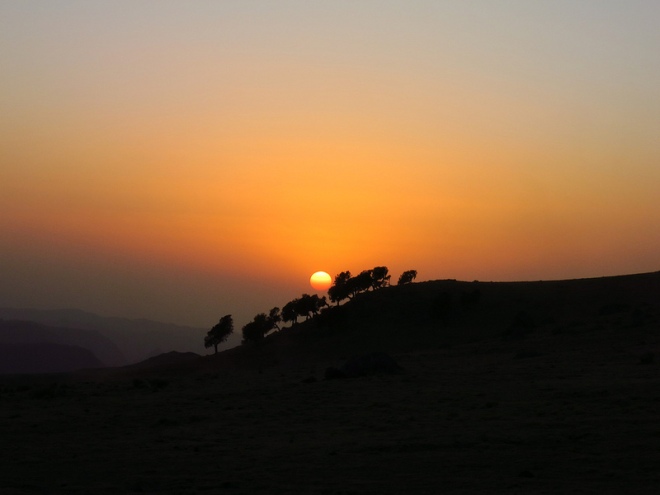 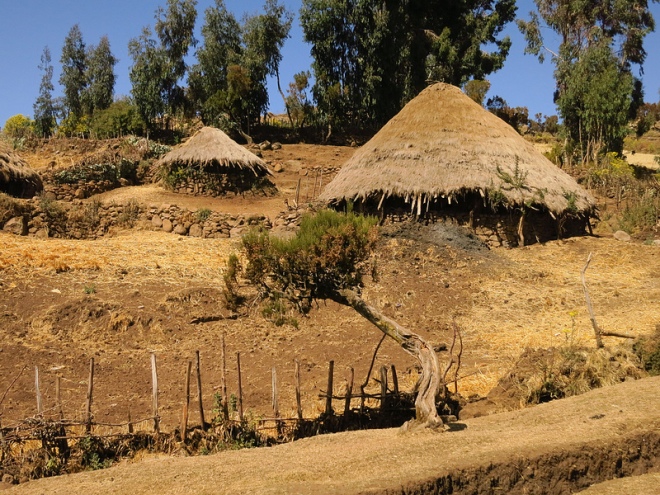 The jumping-off point for Simian Mountains trips is Gonder (or Gondar, one of Ethiopia’s old capitals, famous for its walled enclosure full of ruined castles). From there it’s now just 2 hours by local bus or minibus to Debark, near the entrance to the Simian Mountains National Park: the road has recently been surfaced from Gonder as far as Debark (they were paving the road through town on our visit, making it a dustier place than ever).

Once in Debark, it’s easy and quick to arrange a trek, which can be sorted out in a hour or so: the National Park office on the southern (Gonder) edge of town can arrange the (compulsory) armed scout and entrance fees, plus an optional guide, mules (plus mule drivers: porters aren’t used in the Simians), and a cook. We went the whole hog and got the lot, plus a lift by car for the 12 or so kilometers from Debark to the Simian Lodge, inside the park gate, where the spectacular scenery begins and we started the walk (saving 4 or 5 long hours of walking along the road from Debark to the park gate, which is scenic enough but in nothing like the same league as the remainder of the hike). At the end of the trip, we paid for another lift from Sankabar back to Debark, as the alternative would be to follow the dirt road all the way back (2 long and very dusty days). In the Simians (as in Ethiopia as a whole) most things are very cheap, and National Park entrance fees, the scout, guide, mules and drivers, and cook are pretty cheap. Getting dropped inside the park on the other hand is really expensive: 1,400 birr (US$75) by car from Debark to Sankabar, and a whopping 2,400 birr (NS$130) from Chennek back to Debark, but it’s worth it. With the help of the car, we hiked what’s generally regarded as the best part of the Simian Mountains in 4 days, walking from the Simian Lodge to Sankabar on day one (2-3 hours), from Sankabar to Geech (Gich) on the second day, and on the magnificent third day, hiking Geech to Chennek (a hike which absolutely shouldn’t be missed!) These two days both took 7-8 hours at a leisurely pace. The fourth and last day turned out to be a bit of a cheat, as we simply wandered around by ourselves around Chennek camp for a couple of hours (an incredibly scenic spot, by the way) and then caught the car (when it finally turned up) back to Debark (a 2-hour drive) in the afternoon. We could have probably just made the summit of Bwahit (4,430 meters), which rises above Chennek camp, if we were quick, and returned late afternoon back to Debark, but after three fabulous days’ hiking (and three mind-blowing weeks in Ethiopia) we were happy to get back to a hottish shower and a proper bed. Talking about beds, although most trekkers still camp, there are now very OK huts at Sankabar, Chennek and Geech camps, with real beds (!) cleanish sheets and blankets. We had no problem with fleas (apparently a big problem in many cheap Ethiopian hotels), and all three nights were far more comfortable than those I’ve spent in huts in the Taiwan mountains. The price per night also works out about the same as renting a tent and sleeping bag (ie very cheap). 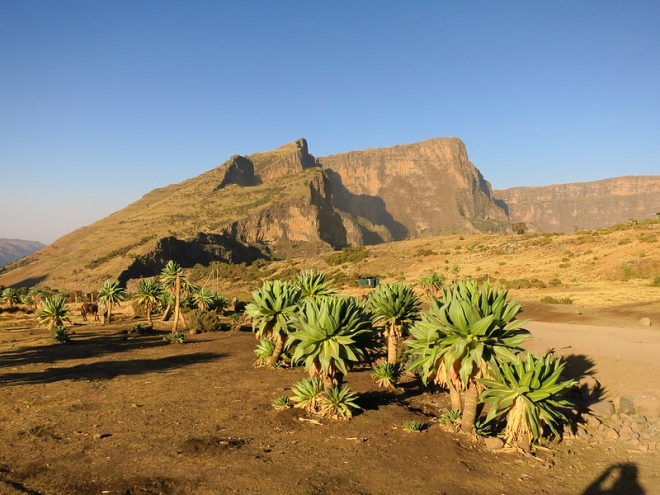 The the trail between Geech and Imet Gogo 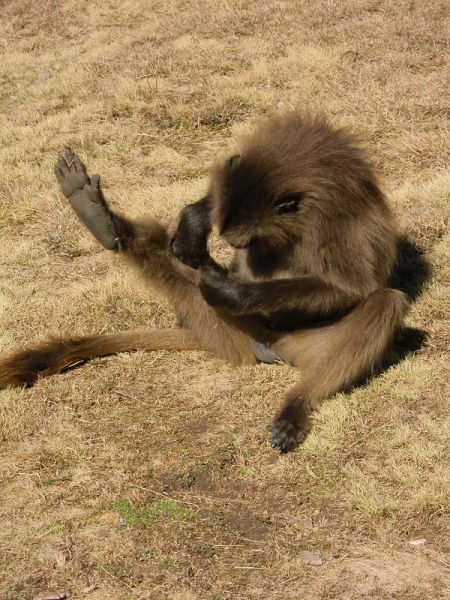 If I had one minor problem with the whole trip, it’s that Simian Mountains treks are big business these days and guides, cooks etc are just beginning to realise how to wring a little extra money out of hikers. It’s all very good-natured and easy enough to avoid, but guides will try to add extra days that aren’t really needed (we could have done the trek in three long days and still got out of the National Park before the gates closed for the night at 6 pm), the cook tried to buy up half the food in Debark for our four-day trip (for example she tried to buy FIFTY good-sized bread rolls for two of us, for just three days!!), and the cost of private transport to-and-from the Park is simply a rip-off. In the end though we still spent only about US$450 between two of us, and had an absolutely awesome time. 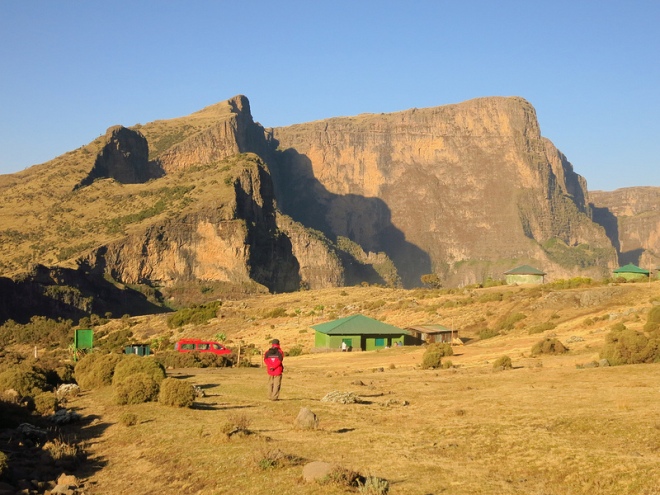 Gelada baboon on the escarpment near Sankabar

The view along the escarpment from Sankabar camp