A very brief walk on the tracks, between Sandiaoling and Dahua Stations

Youkeng Old Trail (幼坑古道) runs parallel to the tracks of the Pingxi Branch Line (an hour’s train ride southeast of Taipei) between Sandiaoling and Dahua Stations, and not only provides a much easier alternative to the ridgewalk between the two stations over Mount Neipinglin (described in the last blog entry, below), but also makes for an attractive and interesting hike in its own right. Of course this being Taiwan, there are several options for turning this simple and pleasant walk into a (much) harder hike, and instead of descending to Dahua station at the end of the old trail, we went in the opposite direction, south, taking a trail over the steep little Mount Youkeng and a seemingly endless succession of similarly steep little peaks, to finally join the Mount Neipinglin ridge. A final descent to Shifen was by the Thousand Step ridge, which is a lot more attractive and worthwhile than the name might suggest!

The route starts, like the hike over Mount Neipinglin, in the village of Yuliao, a short walk down the tracks from Sandiaoling station. Pass the trailhead of the Sandiaoling Waterfall Walk, cross the tracks and walk down the little street beside the river on the right. Climb the concrete steps at the end and at the top a path climbs into the woods; keep straight on at the first junction, and the trail descends to a T junction beside a stream. Last time we turned left to follow the stream path up onto the main ridge high above, but for Youkeng Old Trail, turn right, and shortly the trail descends to an corrugated iron building, crosses a picturesque stream by a bridge, and climbs gently up the other side.

Several trails branching off on the left lead up to Mount Youkeng (幼坑山) and an interesting alternative route to up to the ridge at Mount Neipinglin. There are so many junctions on this and other nearby trails that it’s a relief to find that almost all are marked with those ubiquitous little tin signs which make route-finding (for those that read Chinese at least) much easier. Continuing straight ahead though the Youkeng Old Trail keeps fairly level and low, passing a few ruined old brick houses atmospherically looming out of the thick jungle. 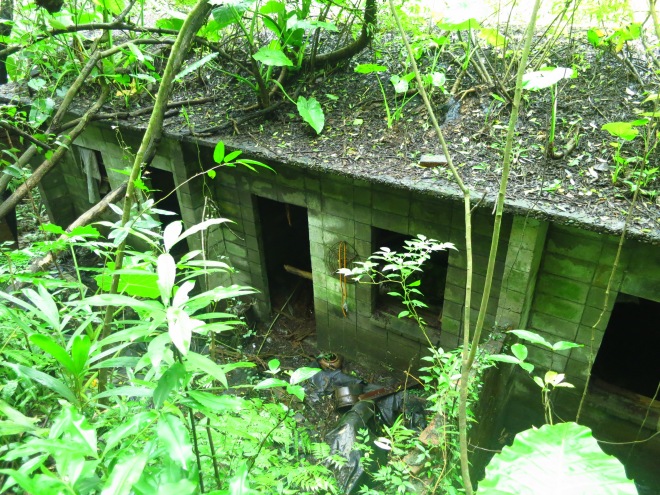 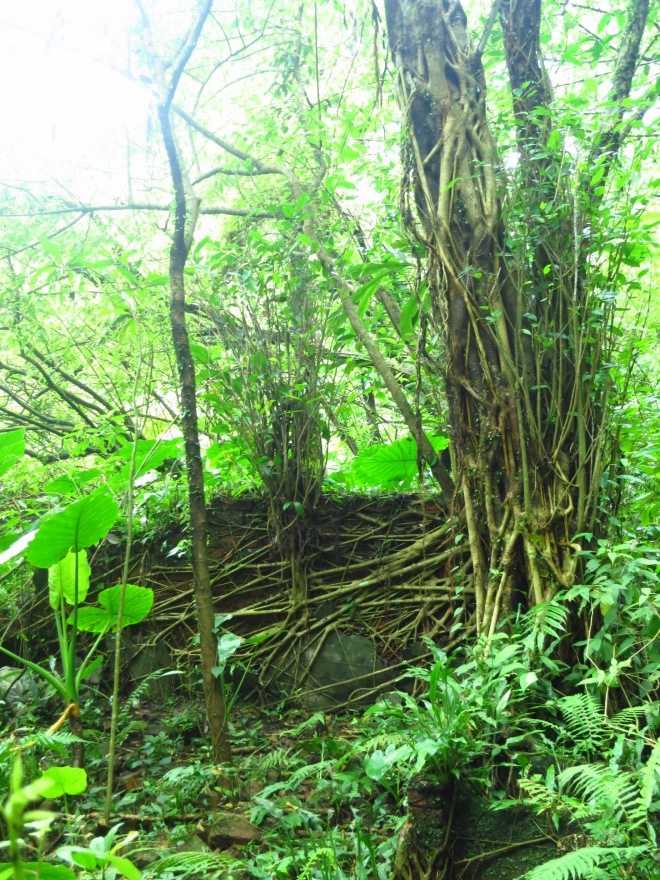 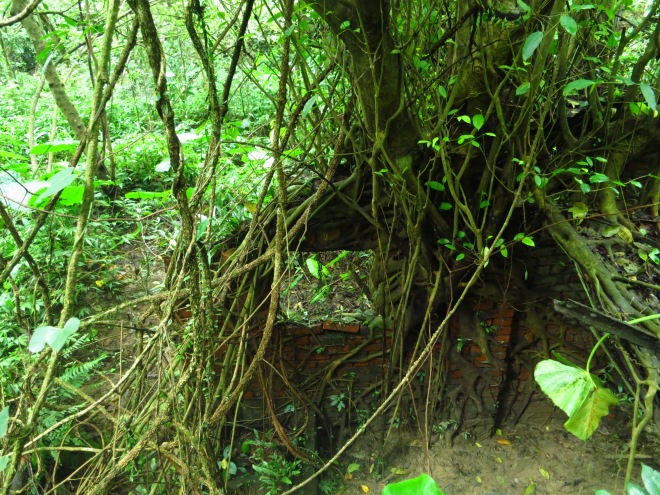 Soon after the houses the trail crosses another stream, and a bit later reaches yet another junction opposite an attractive old red-brick farm house (Youkeng no. 14; 幼坑14號). Turn right here and follow the surfaced path downstream and in a few minutes it passes a tiny but rather attractive small waterfall. A few minutes further, just before reaching the train tracks, the stream drops over the larger Youkeng Waterfall (幼坑瀑布). 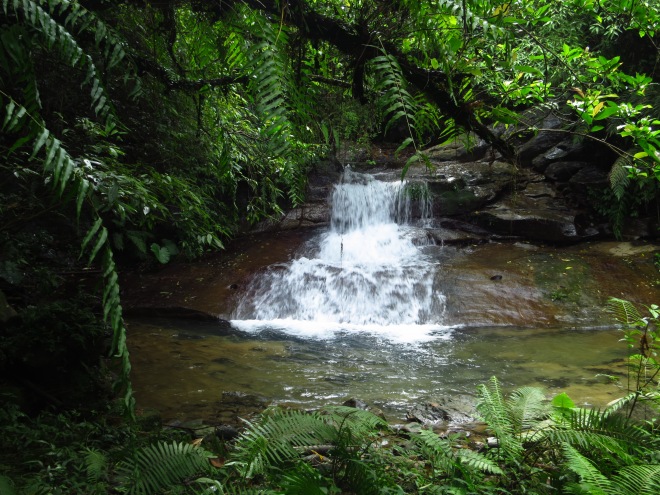 The first of the two waterfalls on the Youkeng Old Trail 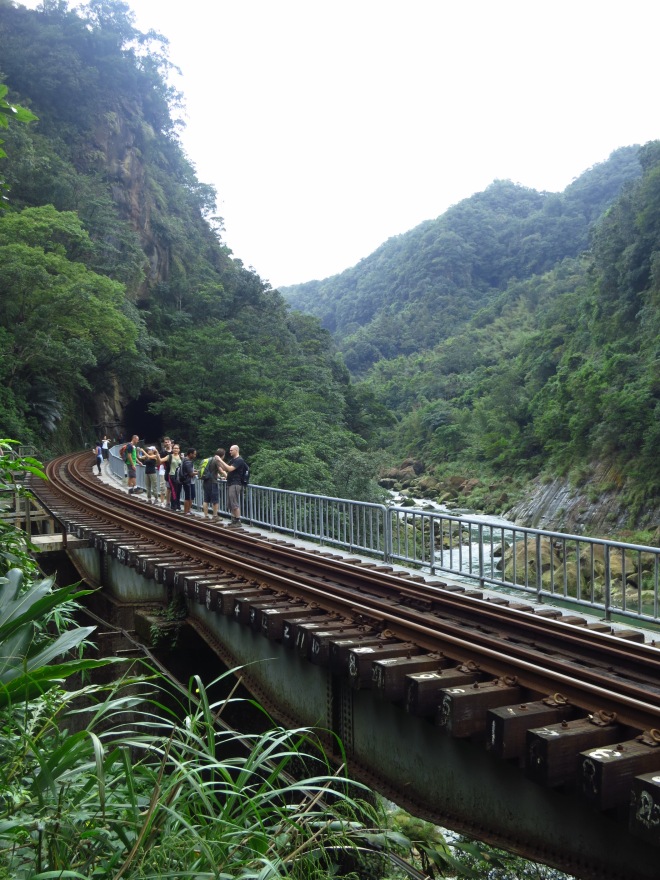 The train tracks below Youkeng Waterfall 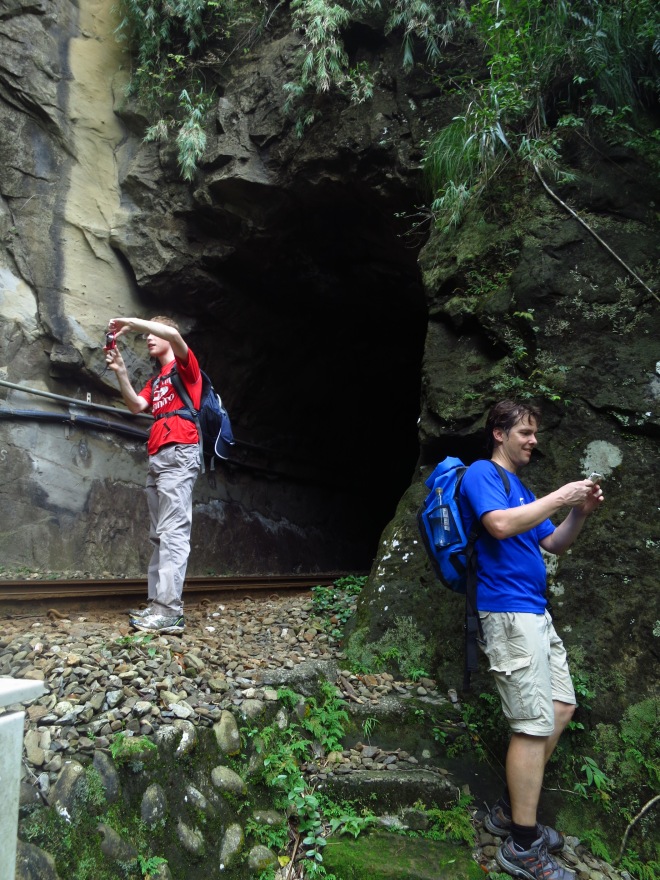 Complete a small loop by walking a few yards along the tracks and then returning upstream along the other bank of the stream, back to House no 14, then follow the trail straight on, climbing gently into the hills. Before very long there’s an unmarked junction (one of the few on the route). The fork on the left leads up to a rather fine old stone Earth God Shrine hidden in the forest. The right fork descends to cross a beautiful stream by a bridge, then climbs up a hideous set of concrete ‘steps’ to the farmhouse at Zukeng no. 2.

The route of Youkang Old Trail climbs the concrete steps beside the farmhouse (Zukang no. 2; 租坑2號), from where it’s only a few minutes down to Dahua Railway Station. Alternatively, walk to the left around the house to the back and follow a scrap of path into the woods behind and a metal water tank, and another trailhead: the start of the long, hard climb to the Mount Neipinglin ridge, a far rougher and far more demanding hike than anything so far, but a very enjoyable hike.

On the trail to the top of the ridge 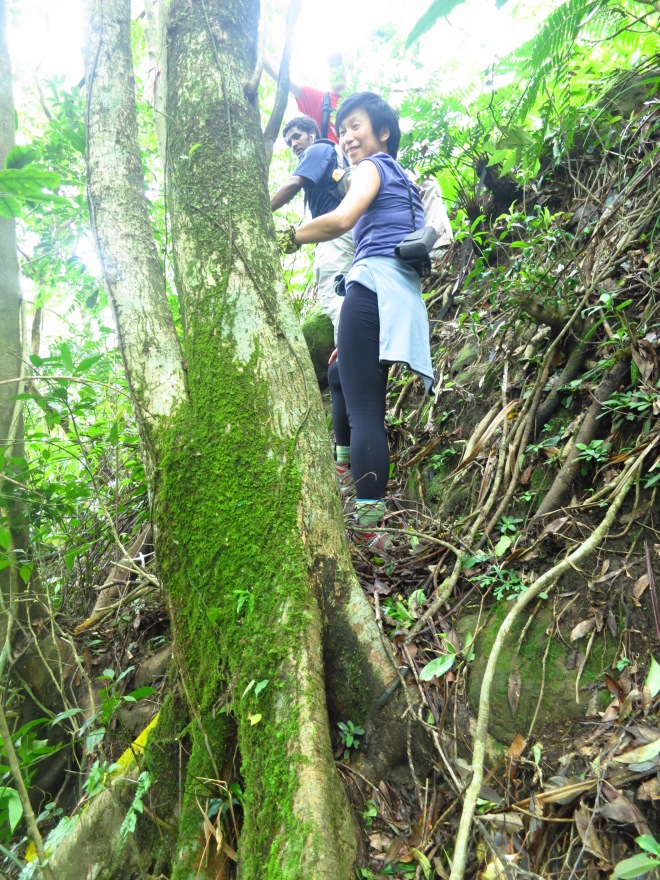 It’s a 15-20 minute slog up the very steep hillside to the top of little Mount Zukeng (租坑山), and then a short, steep descent down the far side. It’s now another 90 minutes or more to the top of the ridge west of Mount Neipinglin: a tiring switchback of very steep climbs and descents over a succession of tiny but sometimes surprisingly rugged little peaks, slowly rising to the main ridge ahead, which for a long time never seems to get nearer. 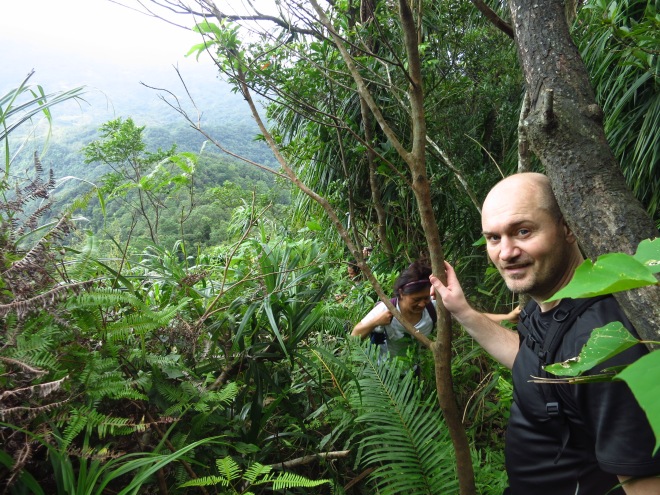 The same vicious thorn-covered shrubs that make the ridge walk over Mount Neipinglin tricky can also be found on this trail, but are luckily much less common.

Eventually though, just after one of the steepest stretches of all,  the trail drops a few meters to a T junction – the main path along the ridge. Turn left for Mount Neipinglin and its fantastic view; turn right and the trail winds along the top of the ridge into the north side of Pinghu Forest Recreation Area (平湖森林遊樂區). This side is by far the nicer half of the Recreation Area, as the authorities never got round to surfacing the trails on this side, which remain narrow and natural, with some great views when the tree cover briefly parts. It’s a surprisingly long walk along the ridge (the better part of an hour) before a map board and sign point to the start of the Thousand Step Ridge Path (千階 階嶺步道). The steps here, mercifully, are mostly impacted dirt with wooden risers, and it’s an attractive descent through the woods, interrupted twice by short climbs over little peaks.

On the Thousand Step Ridge path (note the Chinese lantern hanging in the tree- they litter the hillsides in their thousands around the Shifen area, with more dropping into the forest each day…) 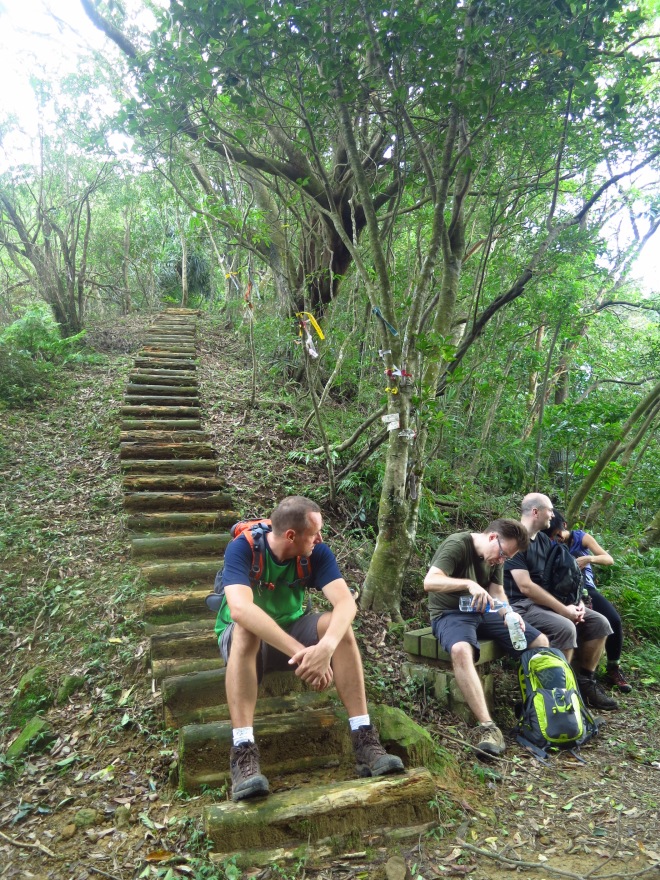 A quick rest before tackling the Flagpole Peak…

The short climb to the Flagpole Peak

The first is crowned by a tiny rocky crest, offering fine views. The second, the Flagpole Peak, is bigger, and crowned with a larger rocky flourish (and flagpole) and offers wonderful views over the upper Keelung River valley, Shifen, and – almost certainly –  the regrettable sight of numerous Sky Lanterns rising into the air and drifting off to litter the beautiful wooded mountains around the village. 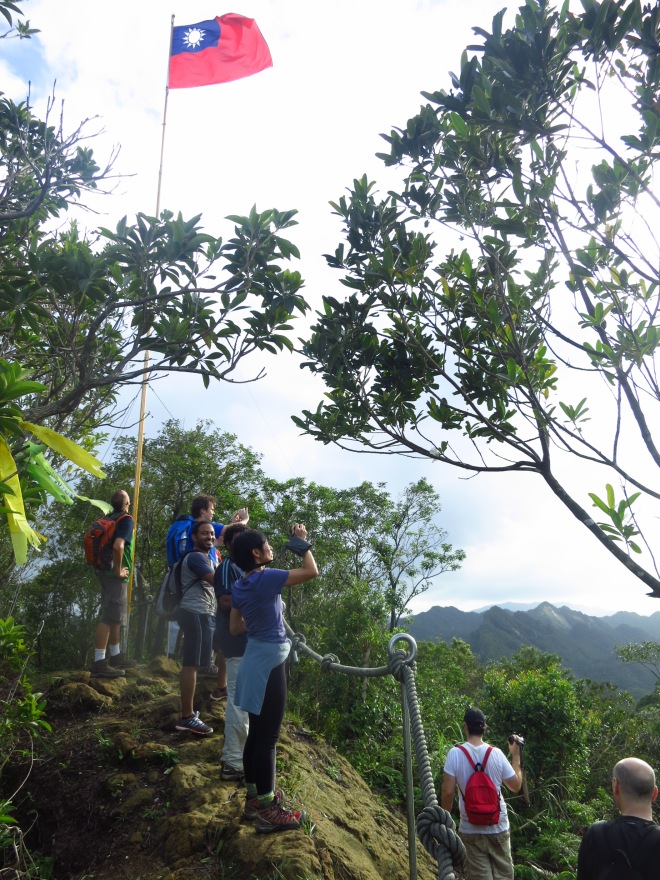 On top of the Flagpole Peak

The final descent is quite steep but short, and the path ends – rather oddly – at a basketball pitch, after which it joins a road. The final ten minute walk into the center of Shifen village is dominated by another unfortunate sight – a huge although admittedly very impressive flyover (still being built) which one day will carry a highway over the valley. The new highway will connect Shuangxi and Keelung, cutting off the long, slow coast road around Cape Sandiao which is the main way between the two places at the moment. 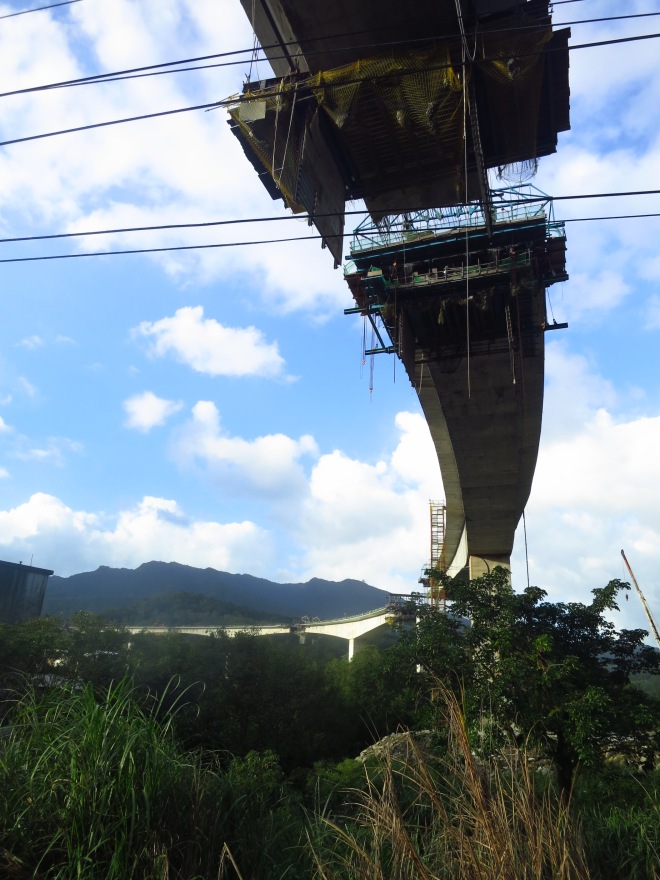 The new flyover above Shifen village

To follow Youkeng Old Trail (and the route up to the ridge via Mount Zukeng), you’ll need a copy of the Taiwan Jiaotung map of the area (no. 11: Ruifang and Jiufen). The whole hike took us about eight hours, including a few rests. Youkeng Old Trail between Sandiaoling and Dahua Stations can easily be done in less than three.

The group on the Flagpole Peak, at the end of the hike