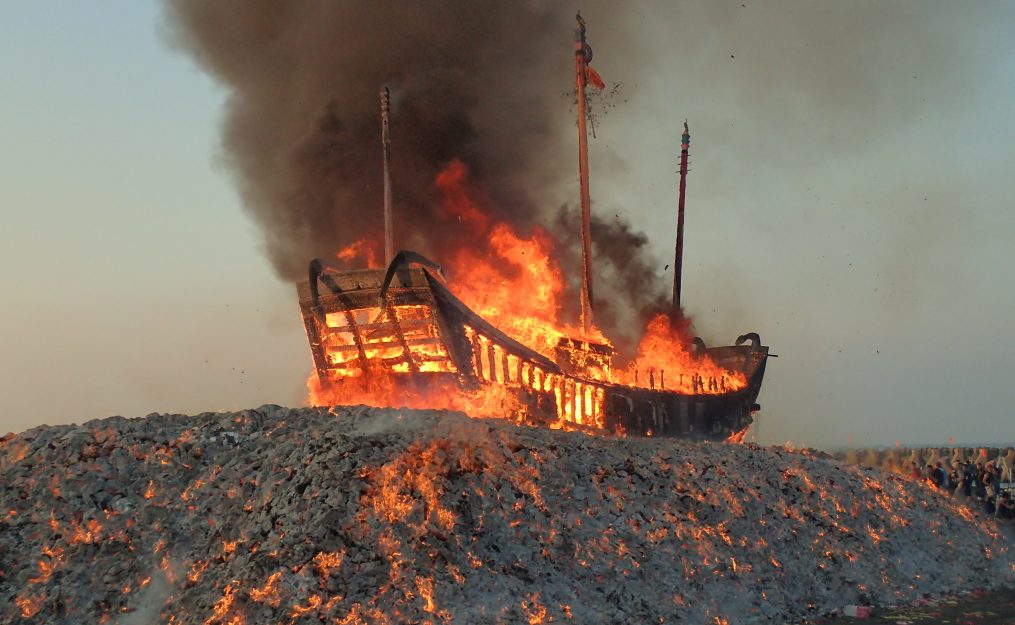 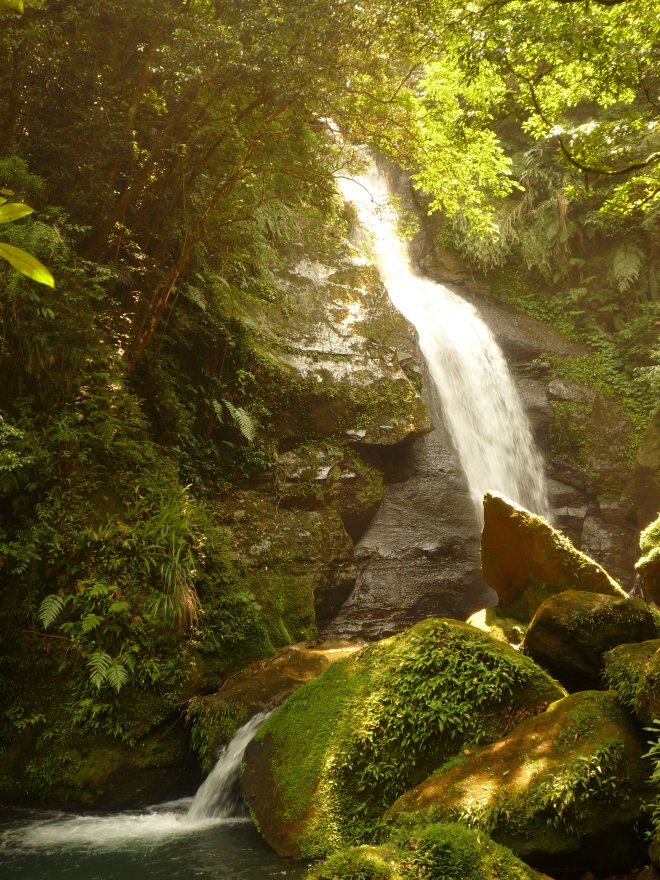 The hike ends at Jiufen, in the shadow of shapely Mount Keelung, which dominates the view on the trail descending from Mount Jingua

Some of the trails in our walk (but not the Mount Sandiaoling trail itself) are described in detail on pages 80-81 and 124 -137.

Add another wonderful trail to the plethora of wonderful trails in the upper Keelung River Valley. The Sandiao Dalun (三貂大崙) trail, which basically connects Sandiaoling station with Houtong along the fine ridge to the east of the Keelung River via the historic Golden Letters Tablet (金字碑) is neither one of the most strenuous nor the most beautiful of the trails in the area, but those are very relative qualifications, because in most other areas around Taipei this would be prime hiking territory. In the event, the trail seems known only to hiking groups, which can only be a big “plus”.

The trail forms the constant centrepiece of several interesting routes that connect Sandiaoling with Jiufen and Jinguashi. This makes for an interesting hike culturally as well as a very scenic one, connecting the coal mining areas (and relics) of the upper Keelung River Valley at Houtong with the gold and copper mining centers on the other side of the ridge, passing a couple of atmospheric, long abandoned miners’ villages on the way, now nearly reclaimed by the jungle.

The route begins by following the train tracks south from Sandiaoling station (as though heading for the Sandiaoling Waterfall Walk trail), but veering left towards the tunnel when the tracks converge. Up the steps on the left leads to the trailhead for the short but long-enjoyed trail to Menghuan Temple (with a great view) and the lovely Two Phoenix Gorge Waterfall in the glen just below.

Turn right and in a few minutes, after crossing a tiny stream, an unclear trail on the left dives into the undergrowth, soon entering attractive woodland and climbing, short but steep, to reach a second road, county route 37. Turn left for about five minutes, uphill, and across the road the rather neglected Ruide Temple ( 瑞徳宮) stands right beside the trailhead for Sandiao Dalun. 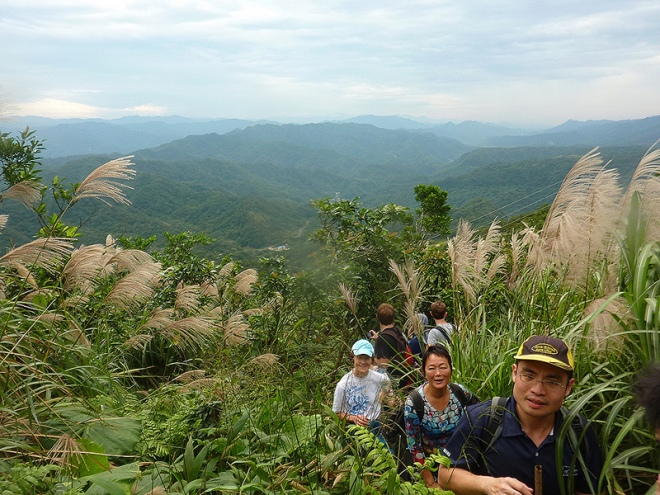 The first section of the trail (uphill to two electricity pylons) is wide and easy, and although after the second the trail narrows and is overgrown, it’s still pretty easy going. Shortly after that second ugly metal tower, the first view (one of the best on the hike) opens up ahead, with the twin humps of Sandiao Dalun and Mount Sandiaoling (三貂嶺山) prominent ahead. From past experience it looks as though the seemingly distant peaks will take a lot of time and effort to reach, but for once the route – at least as far as the first peak – is remarkably simple and easy going.

The route gets a bit rougher, but also more interesting, after the first peak

After the first peak the trail becomes a lot rougher, with some interesting rocky bits, although by local standards there’s nothing very testing to negotiate – this is a great trail for inexperienced hikers to get a taste of the Taipei area’s backwoods trails. 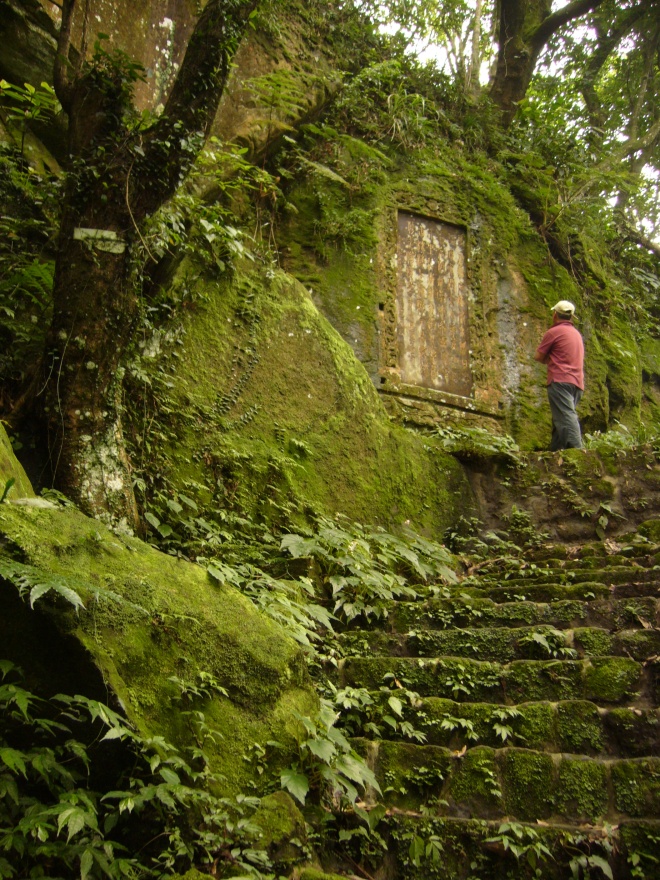 …and a closer look

It’s about fifteen fun minutes’ clamber from the second peak down to the junction with the Golden Letters Tablet Old Trail. This much-loved route has long been a popular walk, so I won’t go into detail here (it’s also described in Taipei Escapes I, on page 124 onwards). Turn left down the steps, passing the 150 year-old ‘tablet’ in about 5 minutes, carved out of a small outcrop, and it’s a mindless but attractive walk of less than 30 minutes to the lower trailhead, where Jiufen/Jinguashi-bound hikers have two options (it’s also possible and easy to follow the road down to nearby Houtong station for a shorter walk). 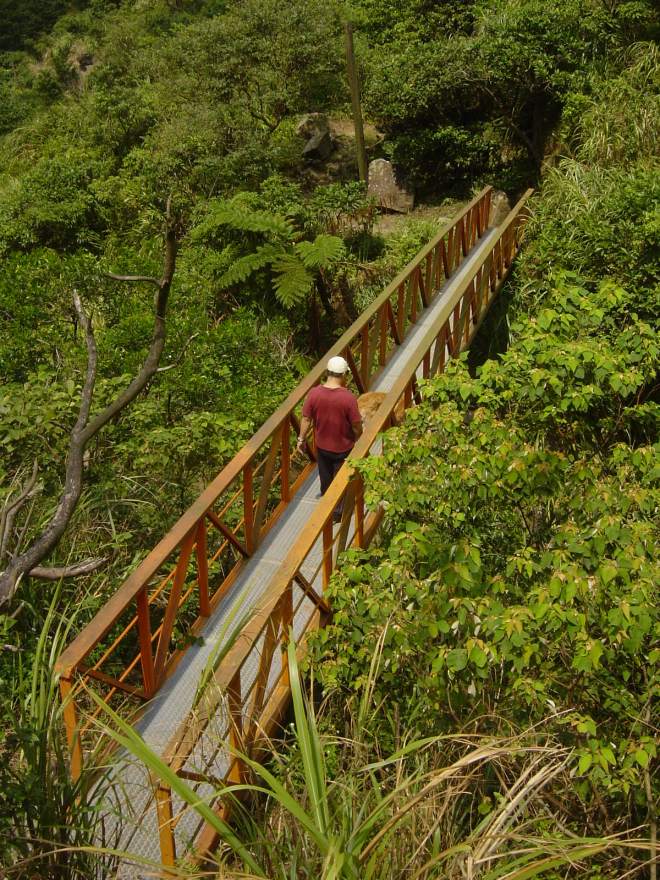 On the Xiaozukeng Old Trail (2008 photo) 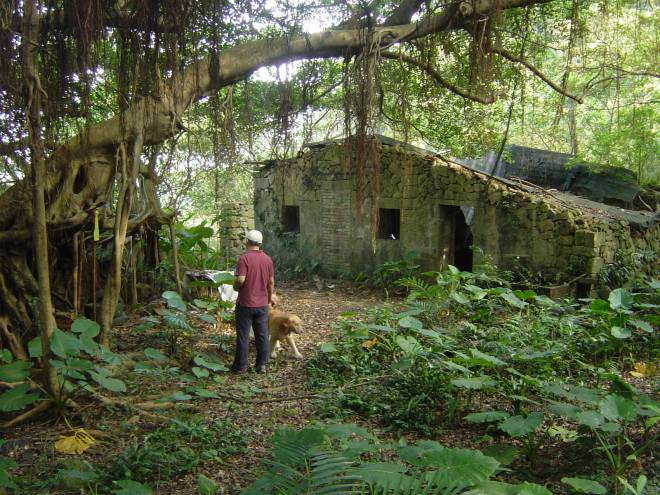 The option of choice if time allows is to walk down the lane from the lower trailhead to the main road along the Keelung River, turn right and take the wonderful Xiaozukeng Old Trail, starting beside the new elementary school. This scenic and interesting trail is short but quite steep, and passes through the fascinating ruins of an old village that once housed workers in the nearby coal and gold mines.  After finally gaining the summit of the ridge (fantastic views!) the trail quickly descends to Jiufen, coming out near the center of the village.

Running a tad short of time, we picked the slightly less interesting but shorter and quicker Dazukeng Old Trail, which starts at the lower trailhead of the Golden Letters Tablet trail. Turn right up the lane, and in about 10 minutes the trail is on the left, climbing steps beside the little stream, with the tall, very thin ribbon of Caidaolun Waterfall (菜刀倫瀑布) descending on the right. The stepped climb is a bit monotonous, although the scenery is grand, and near the top a couple of buildings from the old, abandoned miners’ village stand beside the path, while other structures have fallen into ruins and are covered by the encroaching jungle.

Up a highly unlikely set of raised concrete stairs, the trail joins a road which reaches the main Shuangxi to Jiufen road (route 102). Turn left, and to descend to Jiufen, take the next track on the left in just a few meters. Pass Mount Jingua (金瓜山; also known, for obvious reasons when you see it, as Hippo Hill, of historic importance, since it’s the spot where the first gold seam was discovered in Jiufen) on the left, keep downhill at each junction and the trail descends to the abandoned middle school at the top edge of Jiufen village. Veer to the left as you descend along the village lanes to hit the tourist center and the cafes. For Jinguashi follow route 102 for a couple of hundred meters past the Jiufen turnoff, and take the unsurfaced road on the right. Steps on the left in about a kilometer descend past the old Japanese Shinto shrine into the center of Jiufen. A more exciting end to the walk for fast and fit walkers would be to continue along the track for another ten minutes or so, and take the trail on the left over Mount Banling and Teapot Mountain (one of the Taipei area’s classic hikes – nearly 2 hours to Jinguashi), although an early start at Sandiaoling would be wise to avoid getting down after dark.

Personally though, the lure of Jiufen’s tea houses is too much to resist and we ended up in my favourite restaurant in Jiufen, which never seems to be busy (the dark, very narrow and wet passage leading to it and the public toilet next door undoubtedly scare most people off), yet has magnificent panoramic views over the coast, and some pretty OK food.

Now that’s the perfect way to finish a long hike.

We left Sandiaoling station at 9:30 am and at a steady pace with rests easily made it (via the shorter Dazukeng  Old Trail) to Jiufen by about 4:30 (well before dark). Faster hikers should have no problem going via the more interesting Xiaozukeng trail in a similar time. If continuing to Jinguashi it’s safer to start out at least an hour earlier.