It’s hard to believe that a place as magnificent as this could remain so little-known, but the extraordinary defile called the Ghost Axe Canyon, near Maolin in Kaohsiung County, remains to this day inexplicably little-known. Once apparently pretty tricky to reach, Typhoon Morakot, in one of its few semi-positive acts, turned the once strenuous, 3-hour river trace up to the canyon into a wide, flat and easy walk. Unfortunately  it also destroyed the amazingly blue pools inside the Canyon seen on the few pictures of the gorge that can be found on Web (judging from which it looks like it was once a truly awesomely beautiful spot). Visit the gorge without seeing those old photos, however, and you’re highly unlikely to be anything other than seriously impressed. 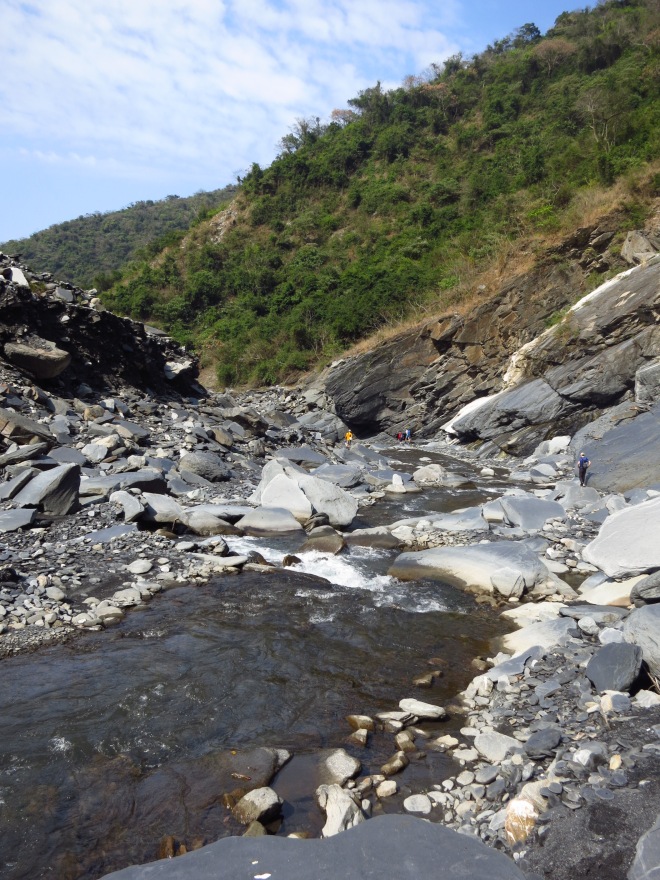 The river valley below the Canyon has deen turned into a desolate, yet strangely grand, landscape by the ravages of Typhoon Morakot

The group near the start of the trip 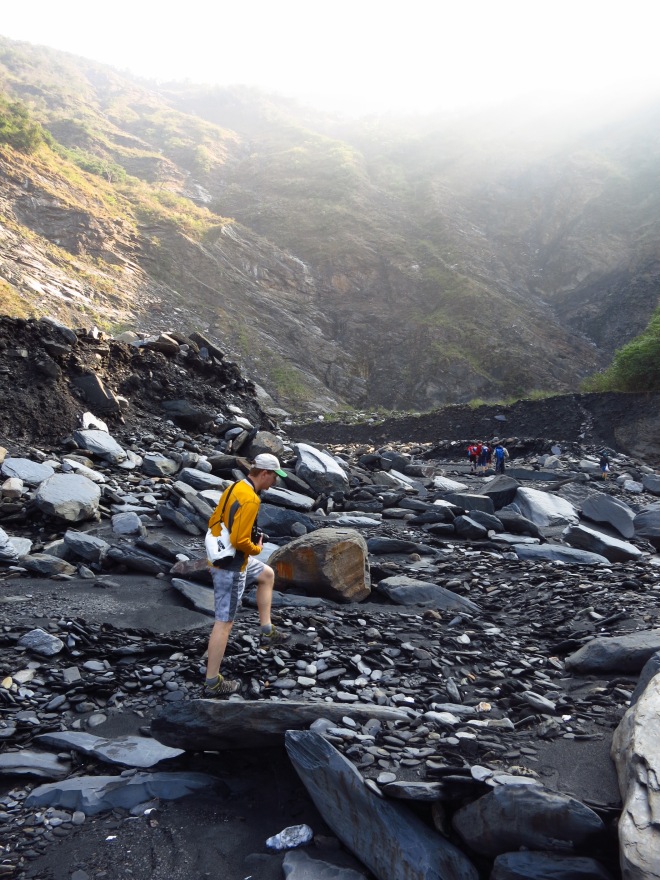 To get there, simply get yourself to the tiny aboriginal village of Duona in the Maolin National Scenic Area, east of Kaohsiung City. The village itself is a fun place to hang out for a night (as we did), although it gets its fair share of local tourists at the weekends. Ride to the end of the main street and dive down the steep, winding road beyond to the former hot springs, which once nestled beside the river (piped into several of those charming concrete pools that the Taiwanese seem to love) were once the main reason people came here. I too was here in 2007, a year before Morakot struck, and now, seeing the ravaged (and far wider, more open) gorge, it was hard to comprehend that this could possibly be the same place. 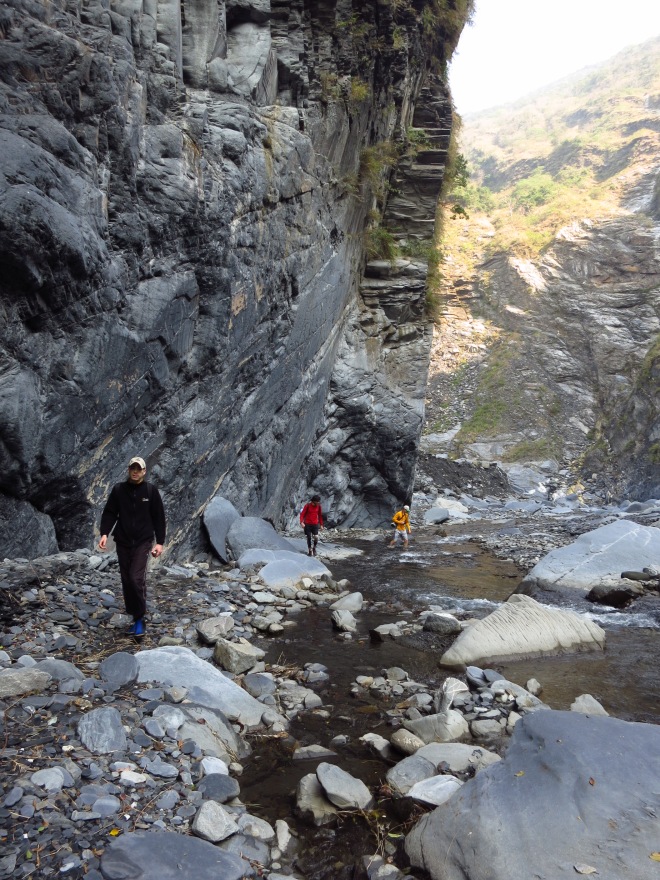 The entrance to Ghost Axe Canyon

Now the way is easy. Turn right and start walking up the gorge, an austere but impressive landscape of shattered, crumbling cliffs, with brittle shale underfoot, and a few bits of softening greenery to soften the harshness just a little bit. It’s only 45 minutes or so until the mouth of the canyon appears ahead after rounding a bend in the stream, and then… you’re inside.

Shortly after entering the defile, it narrows hugely, at one point being just a couple of meters wide, almost blocking out the sky above. A little further up it widens again, and a high waterfall appears ahead, plunging from a tributary stream down the cliff on the left. A little further a small waterfall blocks further progress (unless you have a rope or are seriously agile), but that’s probably for the best. This is one mysterious and powerful place, and it’s only right that it shouldn’t reveal everything, at least at a first visit. Upstream, two further gorges (the Rhododendron Valley and Stone Sheet Valley) are marked on my map for further explorations next time. For now though we’re content to spend a little more time gawping at the sheer walls and taking far too many photos before heading out and back to our bikes. It’s only been an hour or so since we left the bikes, and we still have most of the day to explore. Not even Taiwan has many places that give such reward for so little effort, which makes the fact that no-one seems to know this place all the more inexplicable….

The waterfall near the top of the Canyon

Getting there: It’s easy if you have your own wheels (as in a rental scooter). Simply get yourself to Duona village, ride down to the edge of the river in the canyon below, and walk upstream for 40-50 minutes. However don’t try coming this way during the wet season (May to September) and don’t whatever you do attempt to enter the gorge if heavy rain or afternoon storms are on the way. Being inside the extremely narrow canyon when a flash flood hits would certainly prove a fatal experience. 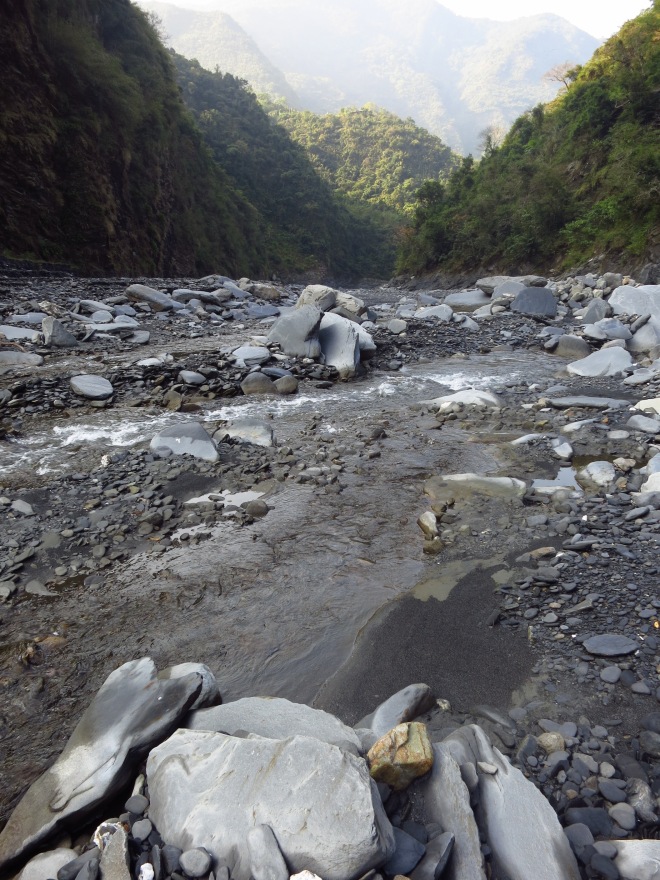 On the way to the Ghost Axe Canyon