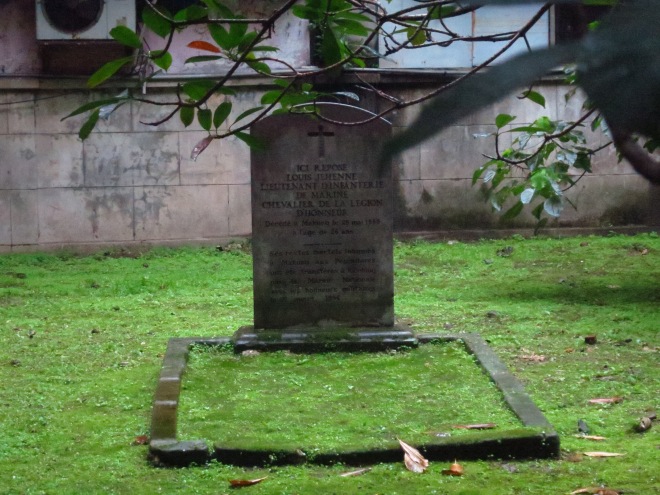 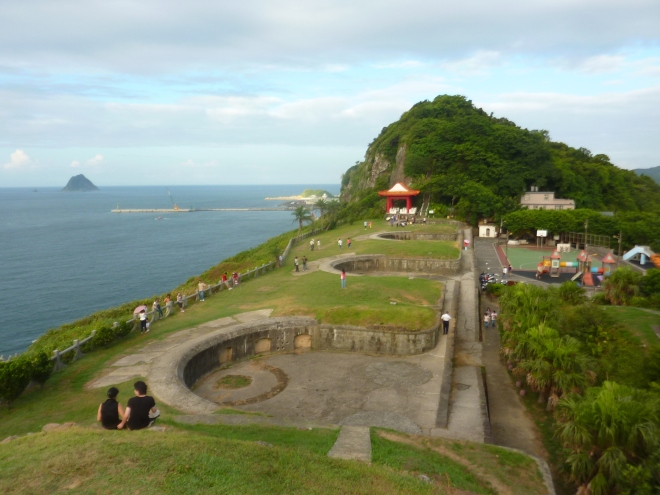 For details, see Taipei Escapes I

Keelung was true to its reputation on my last visit a weekend or two back – rainy, misty and cold. It was also every bit as fascinating and scenic as ever, and it’s surprising that this much more positive aspect of Taiwan’s second port is so relatively little known. Partly to collect some photos taken over the years in one single place, and also to (hopefully) give an idea just how fascinating Keelung is, here’s a series of photos (and a few words) on some of the city’s most interesting spots (apart from the Miaokou snack street…).

Keelung has some of the most fascinating history to be read about anywhere in Taiwan. The Spanish and Dutch both tried to settle here in the 17th century.  The Chinese then started moving in, kicking out the area’s original inhabitants (the lowlands-dwelling Ketagalan tribe). A Century or two later, in the mid 1800s, the British unsuccessfully tried to storm the port during the First Opium War. The French, damn them, were more successful when they attacked (and temporarily occupied) the port in 1864. All of the six or seven relatively intact forts still to be seen crowning various eminences around the city saw action and were at least partly destroyed by attacking British, French, and Japanese forces, and only Ershawan Fort was rebuilt by the Chinese themselves (and is regarded as the most important of all). The remainder were generally restored by the Japs, but while less historically valuable perhaps, are just as worth a look. The best of the lot – Dawuluan and Sheliao East Fort – are especially scenic, and great fun to clamber over, under and around. 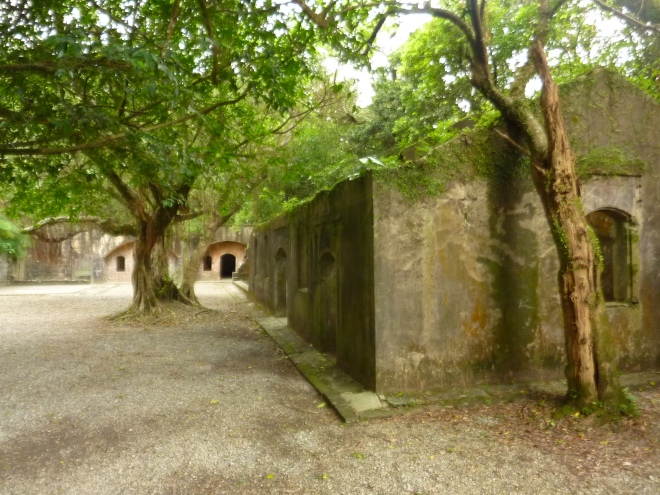 Another view of Dawuluan Fort 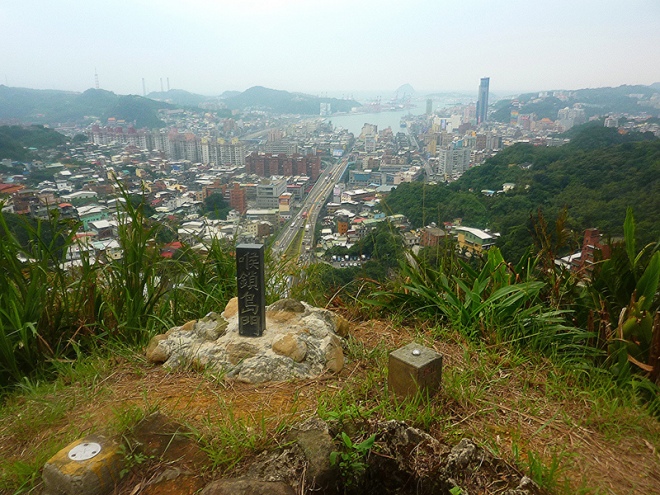 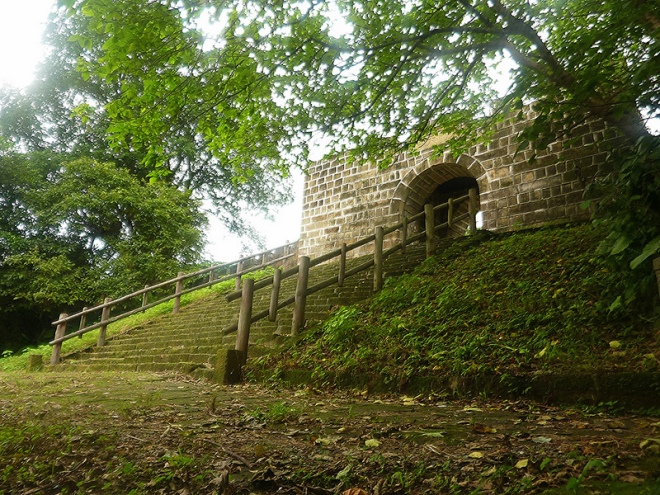 Ershawan Fort, destroyed by the French in the 1860s, but rebuilt by the Chinese and now a national historic monument

Baimiwong Fort commands another great view over the ocean

The scant remains of Gangziliao Fort look out over Badouzi, just east of Keelung city

Relatively recently opened to the public, Sheliao East Fort is probably the most atmospheric of all Keelung’s ruined fortifications

Keelung’s coastal scenery is generally much less well-known than the stretches to the west (Yehliu and Jinshan) and to the east (the sublime cliffs of the Northeast Coast NSA). The one exception is Hoping Island Park, which underwent an unfortunate revamping several years ago. Now re-opened to the public, it’s a regrettable example of old-style Taiwanese tourism development – wide paths, ugly faux bamboo railings, and an insistence on keeping fragile visitors well away from the landscape. Ignore the recorded warnings that blast over the tannoy, step across the forbidden red lines and everything suddenly becomes much more fascinating and beautiful, with places like the famous Cave of Foreign Words (look – probably in vain – for the graffiti scrawled by Dutch settlers in the 1680s on a wall inside this natural tunnel piercing right through the small headland ) and some fantastic rock formations on the foreshore. The finest area, out east, seems to be (permanently?) closed due to a slight chance of rockfalls. Approach instead from the east, by the road to Sheliao East Fort, climb through the hole in the tall wire fence, and you’ll probably have this whole magnificent stretch of coastline, with its Yehliu-rivalling rock formations, to yourself.

Further east the cliffs rise much higher on the headland near at Badouzi with its fine clifftop grasslands, while westwards near Lovers’ Lake (a pretty little man-made lake), the steep coastal hills are covered in dense forest. 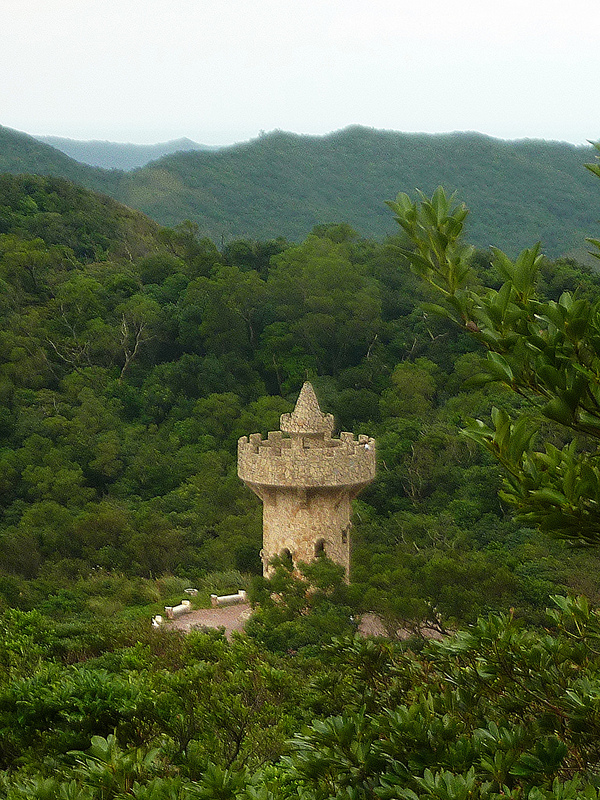 The viewing tower at Lovers’ Lake 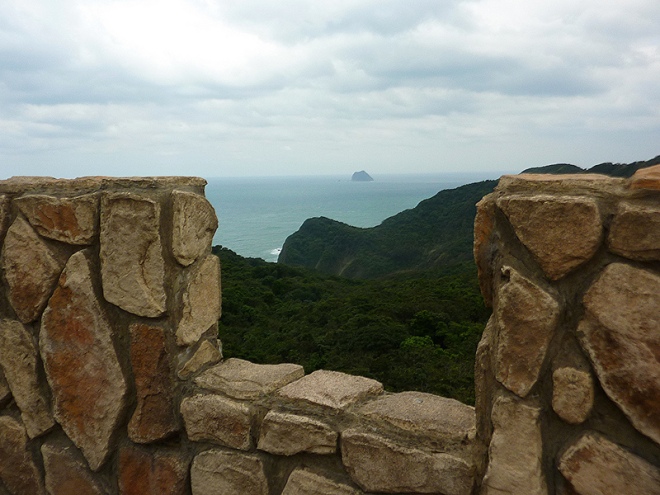 …and the fine view from it, over the wooded coastal hills west of Keelung city center

Some of the amazing rock formations at Hoping Island 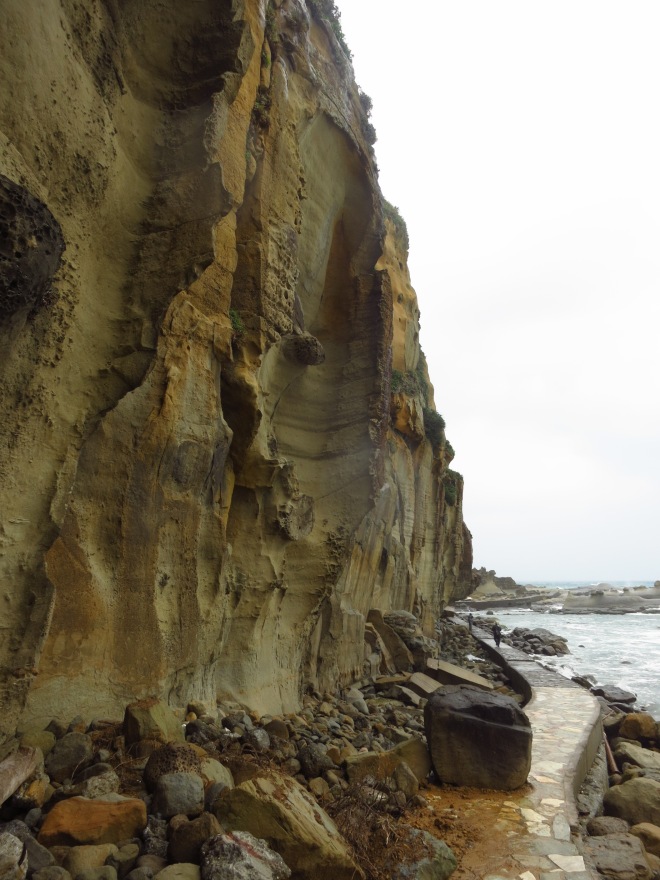 …and the fine sandstone cliffs

The much higher cliffs at Badouzi, perhaps the most beautiful stretch of coast within Keelung City boundary

Another view of the beautiful coast at Badouuzi

One of my favourite Keelung attractions (and a compulsory part of any tour when friends come to stay) are the Fairy and Buddha’s Hand Caves, natural features eroded into the sandstone cliffs behind Keelung Harbor. The Fairy Cave features a pair of deep tunnels behind the cave temple at its mouth. The one on the left is so narrow that I usually find I have to crawl on hands and knees for part of the way to reach the incense-clogged chamber at the far end. There’s no need to bend double in the larger Buddha’s Hand Cave, which zigzags through eroded cracks in the sandstone, to end at an extraordinary natural formation in the roof, which looks for all the world like the fingers of a gigantic hand.

Elsewhere the huge white statue of Guanyin is hard to miss, looming over the central harbor (steps inside climb into her head for a restricted view out). Nearby, beside the busy main road below Ershawan Fort, Keelung French Cemetery is the final resting place of French soldiers who were killed or died from disease during the occupation of Keelung and the Penghu islands in the 1860s. A couple of decades later, China’s very first railway tunnel was dug below Shihciouling Fort. The tunnel is apparently no longer open to walk through (once again due to a danger of falling rock, although I can’t confirm that), although the northern entrance can still be seen (the nicer southern entrance, pictured, lies in a military zone, and the only public access is/was through the tunnel).

Inside the wonderful Fairy Cave

Carving in the Fairy Cave temple

The entrance to the Fairy Cave temple

The southern entrance to Shihciouling Tunnel, the first railway tunnel in China (dug in 1890) 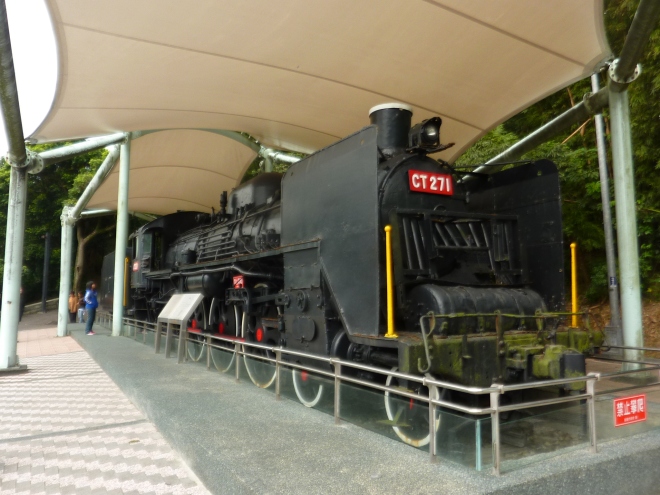 The Dragon Eye Well, originally dug by the Spanish colonists in 1626 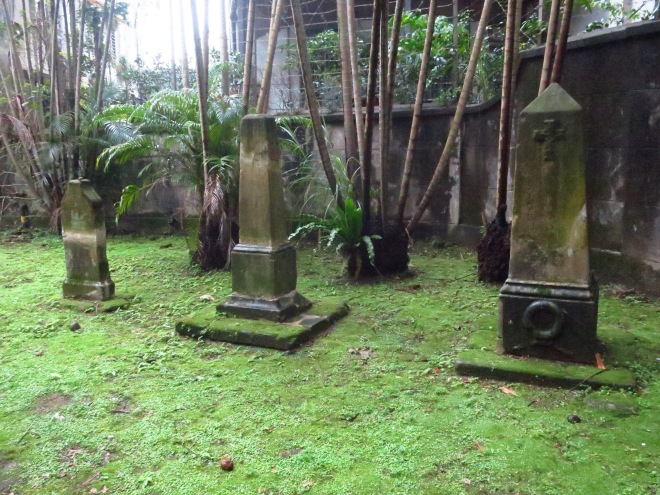 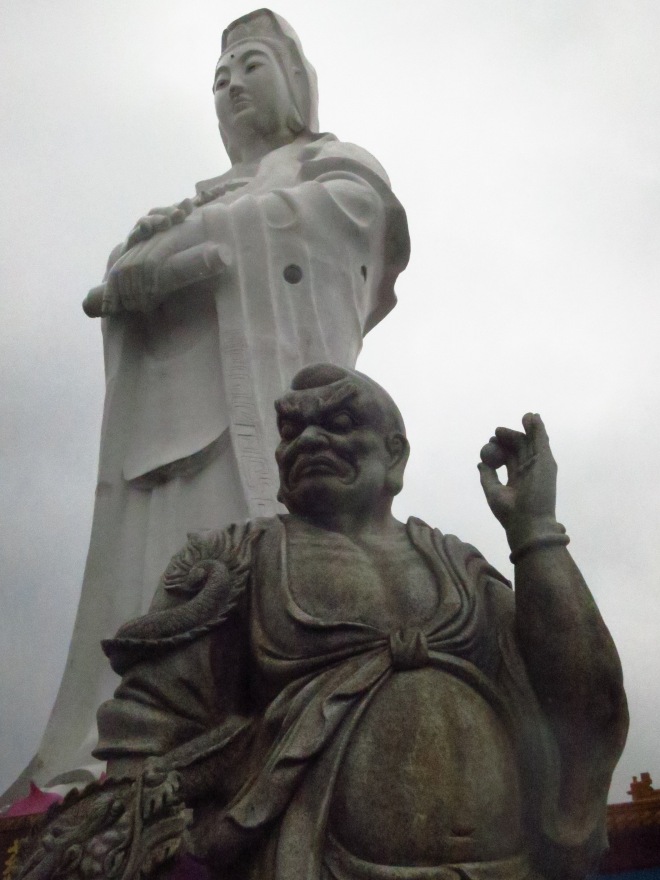 The huge white statue of Guanyin, looking out over Keelung Harbor 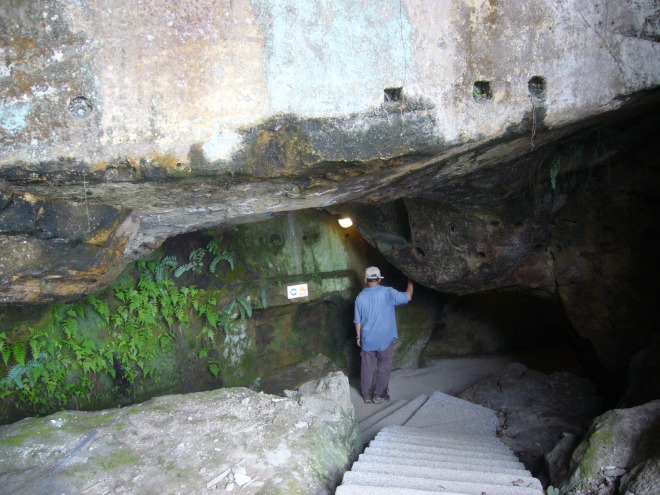 The entrance to the Buddha’s Hand Cave

Keelung City boundaries cover a far larger area than the city itself, and apart from the beautiful coastline, there’s some fine scenery inland too. Keelung’s solitary waterfall is a small thing, but pretty, and the starting point of a fine, rough walk south over the hills to the Pingxi Branch Line on the headwaters of the Keelung River. Above Qidu, looming over Freeway Three, the Stone Lion and Elephant Hills are a pair of small but craggy sandstone masses which make for short but fun hikes. Just to the west, the large and quite impressive overhanging sandstone rockface called Yuemei Cave lies at the start of another short hike, to the top of Mount Xiandonghu, which has an impressively steep, almost sheer, eastern face.

Nearby the valley of the Youna Stream has quite a few interesting spots: abandoned coal mines, a ‘natural’ swimming pool made by discretely damming the stream at one point, and a trail (along an old mineral line) passing an area of fine eroded potholes.

Most intriguing and mysterious of all though is the ‘stalactite cave’ marked on some maps nearby. The ‘cave’, reached by a very steep flight of overgrown steps with chains to help, is just an overhang, and the ‘stalactite’ is made from petrified plant matter, much like the far better-known Dripping Water Guanyin Cave on the Pingxi Branch Line, but few people seem to ever come here, and the countryside on the way there was alive with insects and butterflies when we visited. 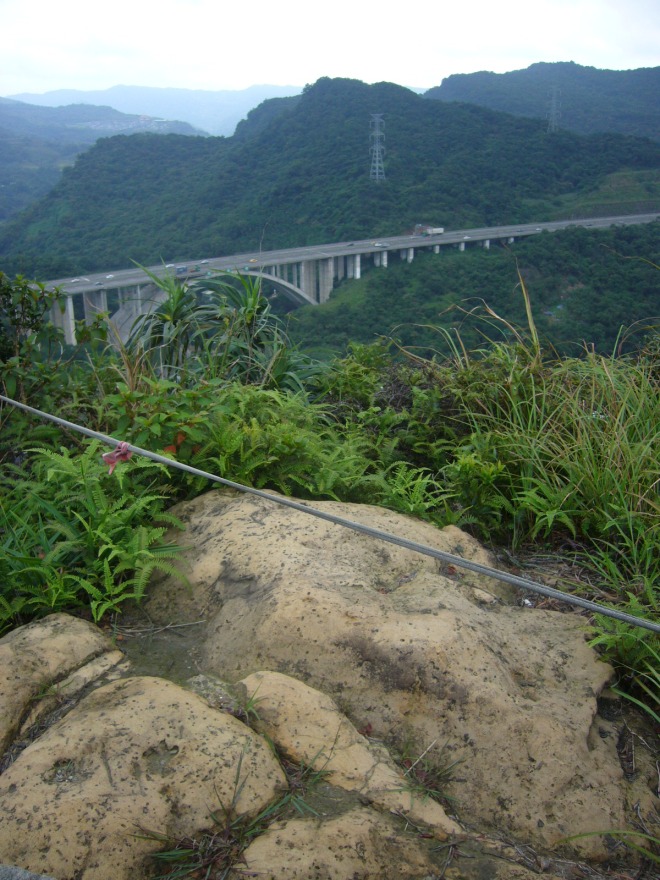 The summit of Lion Mountain 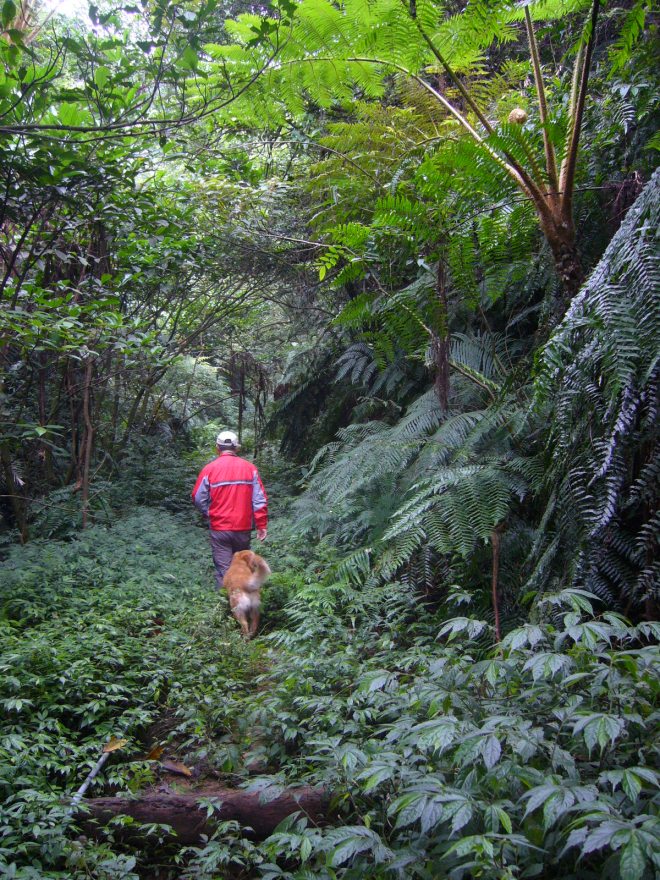 En route to the ‘Stalactite Cave’ 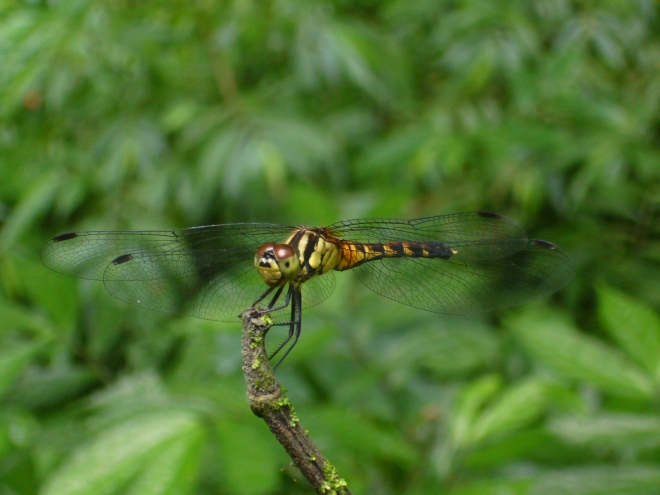 Potholes beside a tributary of the Keelung River

Most of these places (except the  hills, cave and Youna Stream area) are covered in detail in Taipei Escapes 1, on pages 33-47 and pages 50-51.

Near the stalactite cave