The ‘cave’ on the Shanghuang Stream

Tracing the Huangxi with its sulfur-stained rocks, en route to the confluence with the Shanghuang Stream

Yangminshan has a couple of classic river traces – the wonderful Masu Stream (still one of my favorite river traces to date) and the popular Toucian Stream – a very popular place for beginners to learn the art of river tracing. The remaining river traces in the national park (and it’s beginning to look like there are quite a few good ones!) seem to be the preserve of keen local river tracers, and, if our discovery of this real gem last week is any indicator, there are some jealously kept secrets on YMS waiting to be discovered by the rest of us!

We only discovered the Shanghuiang Stream and its amazing gorge/cave scenery after a member of our hiking group posted a video of two blokes kayaking (yes, kayaking!) down it (probably after a typhoon). Luckily they posted the name of the stream in Chinese, and thanks to a great Chinese-language book I have on Yangmingshan (hiking maps of the area are hopelessly inaccurate – neither of the commonly available ones correctly identifies the position of the stream) I discovered where it is, and on a blazingly hot Saturday in mid August a group of us set off to discover the stream and its scenic wonders for ourselves. 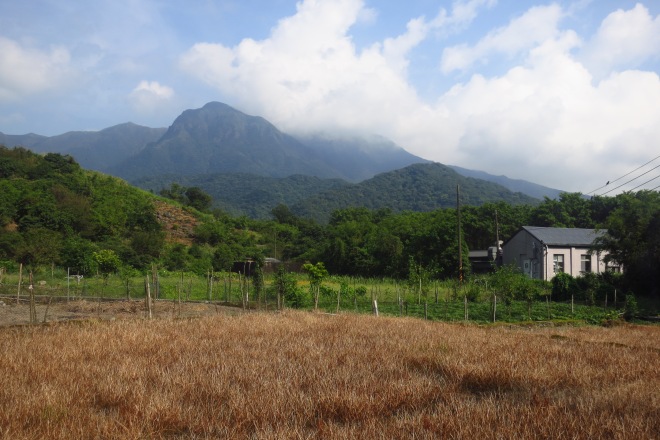 Fumaroles beside the trail to Bayan Hot Spring

Following the hot spring stream down to Bayan Hot Spring

A logical place (not the shortest route, but perhaps the most interesting) is to start at Bayan (八煙) bus stop on the northeast edge of Yangmingshan National Park. Directly beside the bus stop, a narrow lane and series of paths lead down, past a steaming volcanic fumarole to the natural and very popular Bayan Hot Springs. This marvelous place has long been hugely popular, which has led to it becoming a bit spoilt. At least it looked a lot better than my last visit many years ago, since the tarpaulin shades and fly-ridden piles of rubbish were absent this time.

Walking downstream from the hot springs, it’s less than ten minutes to the wide Huangxi, a big stream rushing over a mass of rounded boulders colored bright orange by minerals dissolved in the water. Turning left, upstream, it’s a fun if rather rough river trace upstream through the boulders and a few welcome deep pools to the confluence with the Shanghuang Stream, about 40 minutes away.

Finally on the Shanghuang Stream!

The confluence isn’t especially obvious. The side stream simply sidles in from the left, although it’s clear you’re there when the orange coloring of the rocks suddenly disappears and they return to their natural colors.

At first the trace up the stream is quite unremarkable, but slowly the sides get taller, there are a couple of slightly bigger and deeper pools, and then, only about 20 minutes up, the gorge begins. The cliffs have only started to rise vertically above the stream when the main event is reached – an extraordinary ‘cave’ formed by a vast, house-sized boulder which has clogged the narrow ravine completely. The stream plunges over a 2 meter-high waterfall, then flows through a deep pool through a short, dark ‘tunnel’ formed by the vast rock. It’s quite unique. 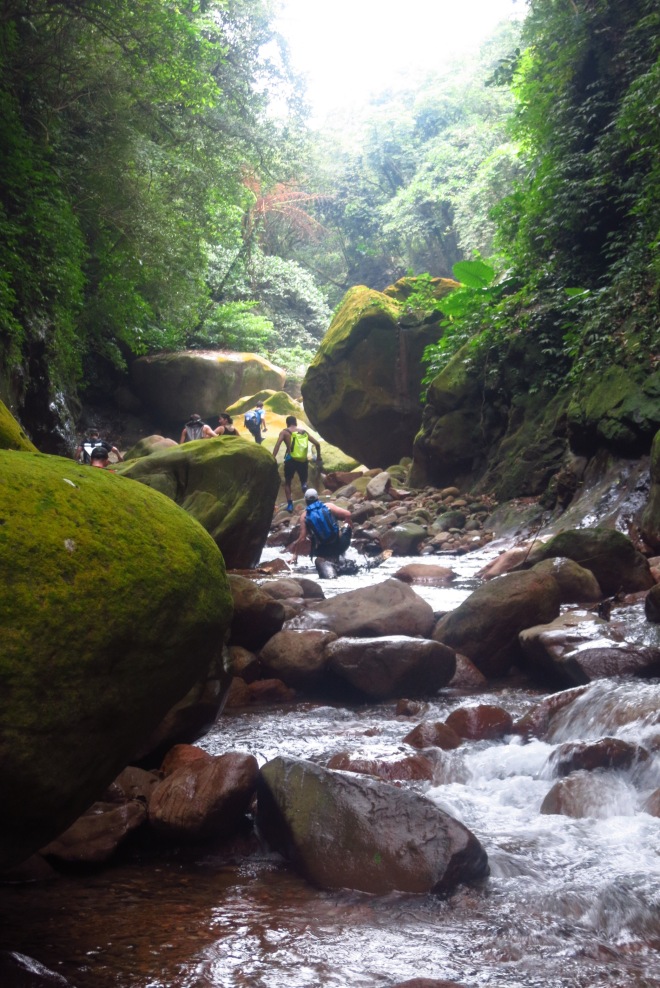 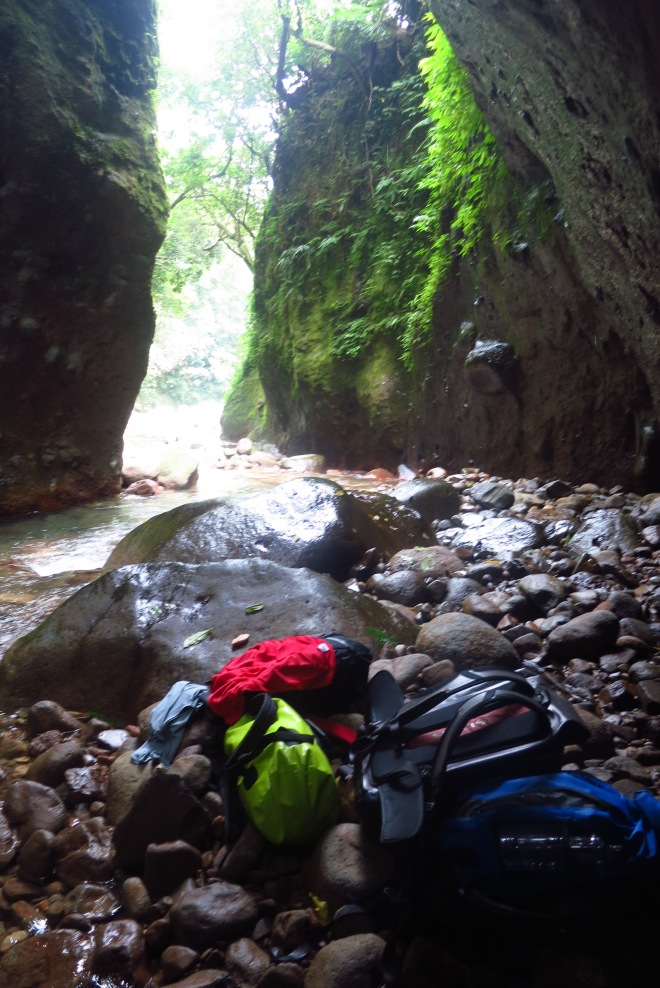 The tricky part is getting past this small but sheer cascade. There are few footholds, the water is deep inside the cave, and although most of our group managed to manhandle their way up the fall (a rope is of limited use and the climb is awkward), the feat needed far more upper body strength than I was capable of.

The cave and waterfall 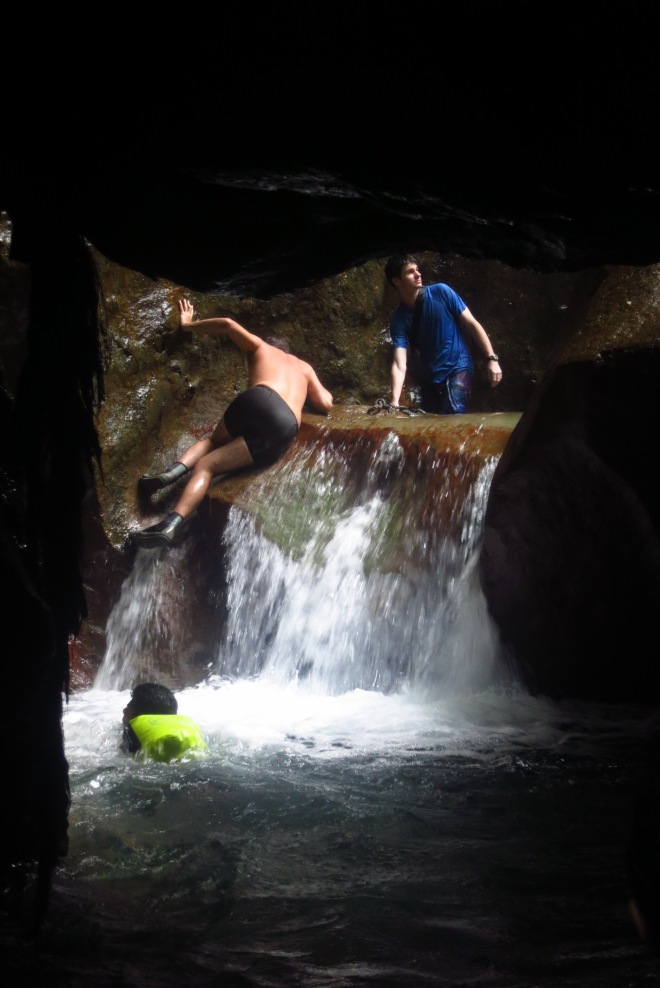 In the end the whole group turned back at this point, although not before the successful river traces made a quick reconnaissance trip upstream a few meters, and reported back that the gorge above the waterfall looked very promising, as it certainly did in the video I’d seen.

The choice now is either to start some serious upper body workouts to give myself the strength to haul myself up that waterfall with the few handholds available or (more realistically in the short term) to start at the Shanghuang Bridge upstream from the waterfall and trace the stream down. Either way, I’ll certainly be back. This place promises to be a magical addition to the list of more adventurous things to do in wonderful Yangmingshan National Park.