The stream just above the lake

Mianyue Ancient Tree, an hour’s walk beyond the lake

The great Jiji Earthquake, which rocked Taiwan on September 21st, 1999, caused both a huge loss of life and enormous devastation. However in several places the earthquake actually created new landscapes, some of great beauty, such as the lakes at Jiufenershan. None of these new landmarks, however, are quite as magical as Shuiyang Lake (水樣森林), which was born that night when a landslip blocked a stream running through a remote valley in central Nantou County, close to the epicentre of the earthquake. As the stream backed up behind the natural dam, creating a sizable lake, it also flooded a coniferous forest that once clothed the valley floor. The flooded trees, their roots deprived of oxygen, died, and over the following years the tree trunks were bleached white by the sun. The unique result now draws large numbers of hikers to one of Taiwan’s most arresting natural curiosities.

Our campsite beside the trailhead a Shanlinsi

We never worked out what this ruin once was…

By chance, Shuiyang Forest was created right on a popular and long established hiking route that once connected the forest parks of Shanlinxi  and Alishan. The earthquake that created the lake seriously damaged parts of the trail, and successive typhoons in the following years have caused further damage, so it’s no longer possible to walk all the way to Alishan, but the section of the route between Shanlinxi and Shuiyang is in good condition, and not too tough. In any event, the sight of hundreds of ghostly, ashen-white tree trunks, reflected in the still, clear water from which they rise, is absolutely magical, whether in the early morning when the trees shine silvery white in the sun, or when the afternoon mists sweep in and the place takes on an almost surreal, slightly ghostly character. 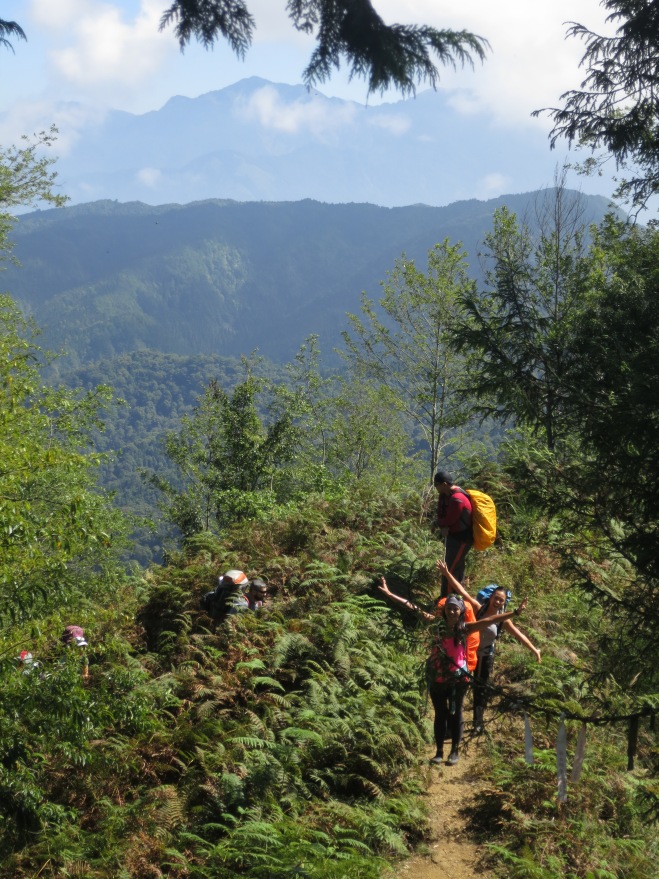 On the higher route

Nowadays the trail from Shanlinxi is the only way to get to Shuiyang Forest (a second route, from Fengshan in Chiayi County, is currently impassable following damage by successive typhoons). The trail divides into higher and lower trails for a spell in the middle, joining up again for the final descent to the lake. The more interesting but strenuous option (the total hike takes about 6 hours each way) passes over the summit of Mount Lujhu (鹿屈山; 2,288 meters), and features several fine panoramas over the surrounding mountains (including the Yushan range) in clear weather. The easier, lower route (4-5 hours each way) follows the route of the abandoned forest road and is longer in distance but largely level. 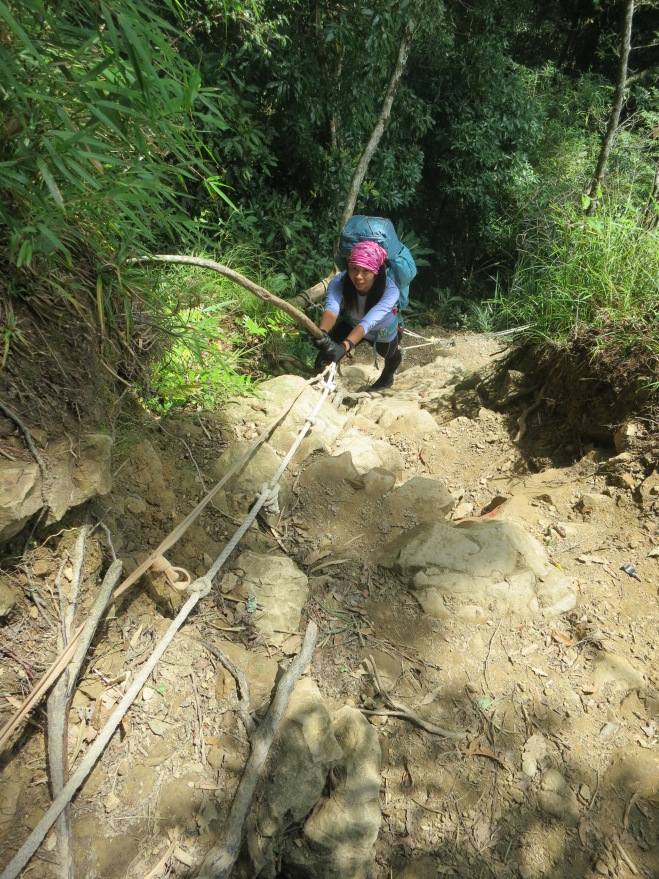 Reasonably fast hikers can cover the lower route from Shanlinxi to the lake in about 4 hours or less, so it’s certainly possible to visit it in a long day hike, but it’s better to plan on making it a 2-day camping trip, both to see the lake in the early morning, when the weather is often at its clearest, and to explore a couple of interesting places beyond the lake itself. Unless it’s in flood, a very large bank of dirt and stones is uncovered at the upstream end of the lake. It’s a rather bumpy campsite (bring a thick sleeping pad) but a convenient one; the water in the twin streams that feed the lake is pure enough to drink after boiling or treating, and it’s right at the end of the trail.

Shuiyang Forest is a magnificent site in good weather

Our campsite beside the lake

The outflow from the lake

The sight of Shuiyang Lake and its ghostly, denuded trees emerging from the afternoon mists, or standing against a bright blue, early morning sky is ample reason in itself to make the long hike out here, but if staying overnight, try to make the 2-hour return hike up to the Mianyue Ancient Tree (眠月神木), one of the largest in Taiwan. The trail starts just upstream from the camping place at the head of the lake. 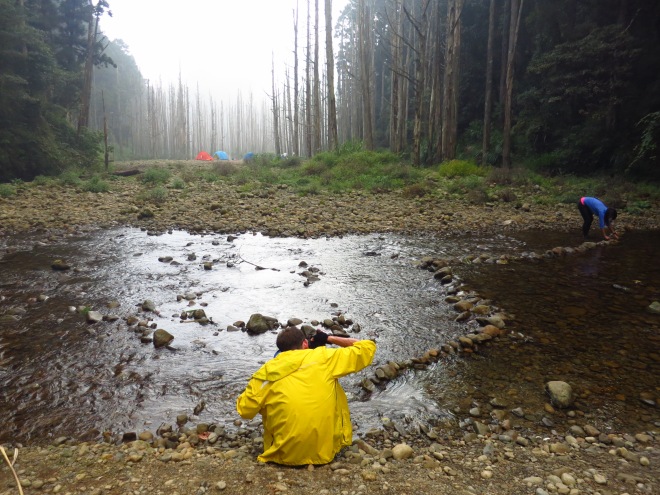 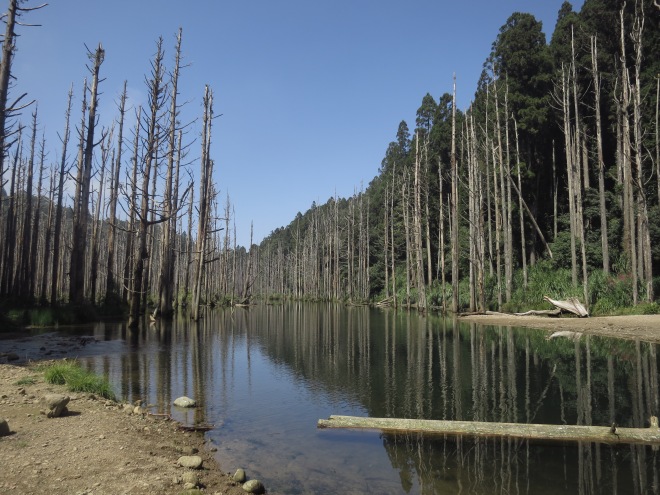 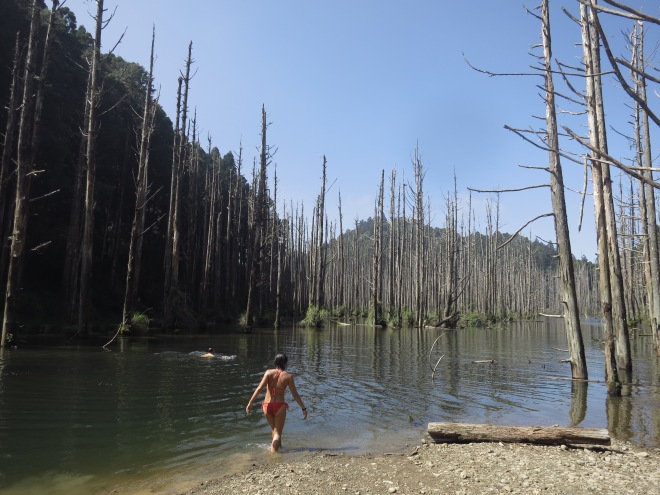 A quick swim before starting back

The gang, at Mianyue Ancient Tree

12 thoughts on “Shuiyang Forest: a remarkable reminder of the 921 Earthquake”