Sean McCormack’s inspirational venture, a shelter for abandoned dogs and other animals on the north coast of Taiwan, is facing closure after the authorities declared their structures on their new location illegal yesterday (November 20th), despite assurances in the past on the contrary. In Sean’s words: Public Works came this morning. They said we have to destroy the kennels, even though they advised us we could remove the roofs and lower everything to legal height, which we have spent a lot of time and money doing instead of finding a new place. Judy will be calling Mr. Kao, the official overseeing our case, to find out why this is happening. 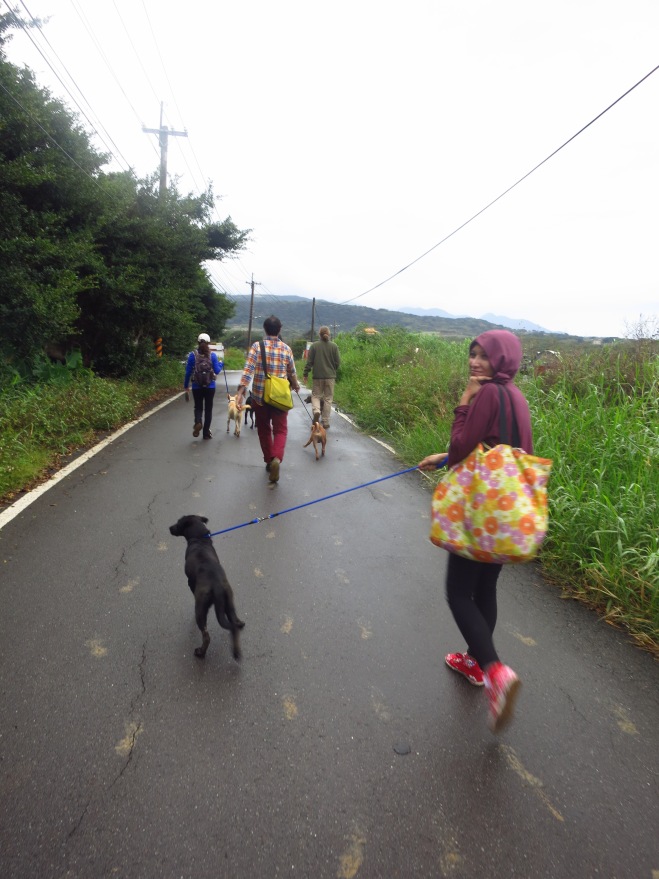 Sanctuary residents get a walk

The Sanctuary is a not-for-profit organization established in 2010 and run by expat and local animal lovers to give a home to abandoned, injured and unwanted animals. Its mission, in its own words, is ‘To relieve the suffering of animals in the Taipei City and Taipei County areas, through rescue, rehabilitation and rehoming…‘ Presently over 200 dogs, plus various other animals, including cats, birds, squirrels, and even pigs, call The Sanctuary home. Unfortunately, through reasons beyond its control The Sanctuary is suddenly facing eviction from its present location, and with a long and wet winter coming up soon, a new home for The Sanctuary’s many animal residents is urgently needed.

In Taipei the ‘problem’ of stray dogs (which make up the vast majority of The Sanctuary’s residents) is usually dealt with through animal pounds, where dogs are kept for 12 days (apparently in horrible conditions) and then put to death if a new family isn’t found for them. According to the makers of Twelve Days (十 二夜), a Taiwanese documentary from 2013 that unflinchingly describes the circumstance in which the dogs are held, about 200 dogs a day are put to death in the city’s animal shelters.

By contrast animals lucky enough to end up at The Sanctuary are given a home for life if they prove unsuitable for adoption (or don’t manage to catch the eyes of an adopting family). It already sounds very nice on paper, but to really appreciate just how amazing what’s happening at The Sanctuary really is, you should pay them a visit, and maybe treat a dog or two to a walk. 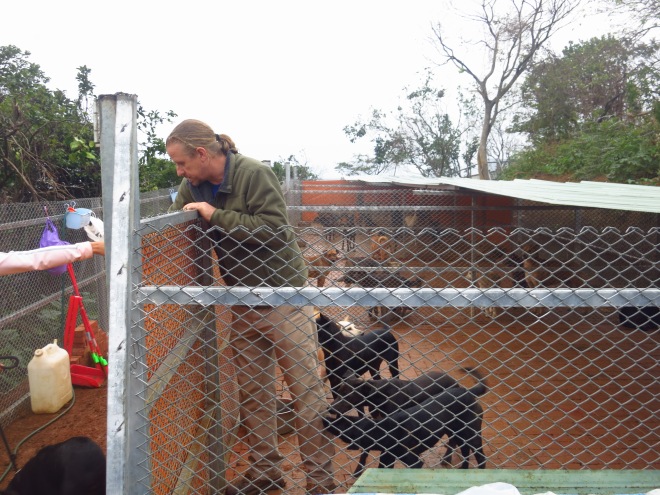 Recently moved in, and soon to be booted out – Sean McCormack at the new location for the Sanctuary, which may sadly be a short-lived one

A group of us headed up to Fugui Cape (Taiwan’s northernmost point) to say hi to Sean and his animal wards on a drizzly Sunday in mid November, and were ferried from the bus stop up to the shelter by Sanctuary manager Judy, who met us at the bus stop in a battered hatchback car – the Sanctuary’s solitary vehicle – whose seats were spattered in mud from resident dogs that had recently hitched rides in the back. The Sanctuary’s new location (they’ve only been there a few months) was similarly simple and functional, with dirt tracks leading up to a series of shelters where small groups of dogs barked excitedly as Sean walked up to them, talking to each in turn. His utter sincerity and dedication to them is immediately clear as mud. Later we take a group of lucky pooches for a walk along the back roads offering views over Taiwan’s northernmost point, and as we walked, Sean gave us the back story of each animal – how it was bought in wounded from being hit by a car, was found huddling scared in the central reservation of a busy highway, or had been caught in an animal trap that was slowly severing its leg. Sean and his team have worked miracles in getting dogs that most of us would pity, and restoring them to physical and – even more amazingly – mental health. Before we met the dogs, Sean cautioned us not to feel sorry for them, as they’d pick up on the vibes and would then feel unsettled. Walking among a group of ten of these miraculous rescues trotting at the end of ten leashes, it’s difficult  not to smile at just how full of life and energy they are, and impossible not to feel moved, grateful, and even a bit humbled that animals that have been through far more than most of us will ever have to face, have managed to turn over a new leaf and continue to live life with a fighting spirit and sheer love of living that puts us privileged yet too-often unsatisfied humans to absolute shame.

You can judge a man’s character by the way he treats his fellow animals. Paul McCartney hit the hammer on the head with those words, unlike narrow-minded critics of the Twelve Days documentary who opined that its makers would have been putting their exertions to better use by making a film spotlighting the suffering of humans in Taiwan instead. Visiting The Sanctuary is one of the more eye-opening things I’ve done in over twenty years of living in Taiwan. Sure, the island’s magnificent landscape is a powerful testament to our amazing natural world, but it’s never inspired me quite like the inspiring work being done at The Sanctuary. The extraordinary spectacle of blind dogs, dogs with only three working legs, and dogs who suffered from starvation, cruelty, or various diseases stemming from neglect such as mange getting so much from a simple walk is an extraordinary education. We’d be vastly better  humans if we could only follow their example and adopt just a fraction of their loyalty, enjoyment of life’s tiny pleasures and sheer love of life.

The staff at The Sanctuary is doing a priceless job of giving animals that were facing a painful end a happy new life, and I’ve no doubt that they’ll find a way through this latest kick in the gut. It must be incredibly hard though – less than a month of fundraising for them at our group Taipei Hikers has proved pretty tiring, and I don’t know how they manage to do it year in, year out. To help out, it’s possible to sponsor an animal living at The Sanctuary (you can also send them a donation or pay the vets fee for a recently rescued animal directly). They’ve also set up a fundraising campaign on the crowdfunding platform Indiegogo which is continuing until December 1st. They’re also always looking for people who can adopt their adoptable animals, and for people to give a dog or two a walk (which is a surprisingly enriching experience for the walker as well as for the dog!).

The Sanctuary counts Jane Goodall among its supporters, so please consider getting involved too: it’s an awfully good cause!

Sean and friends walking a few of The Sanctuary’s residents