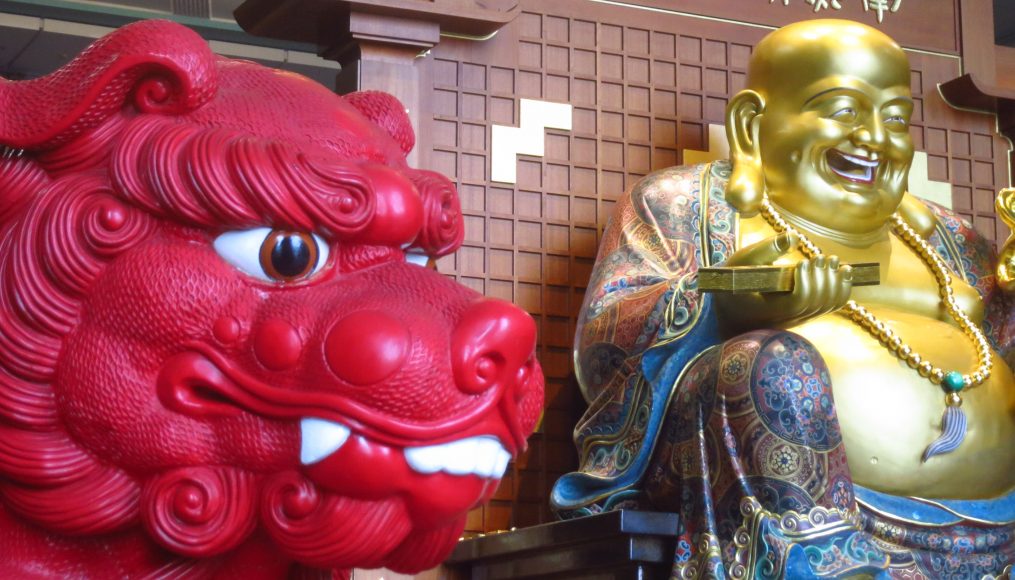 Yushan, Taiwan’s highest mountain, is also one of its easiest to climb 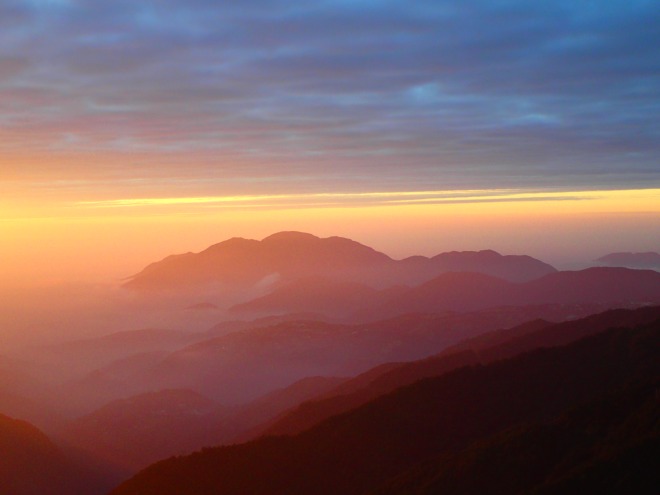 Mountains in Taiwan are famous for their sunrises, but often it’s the sunsets that are the most unforgettable 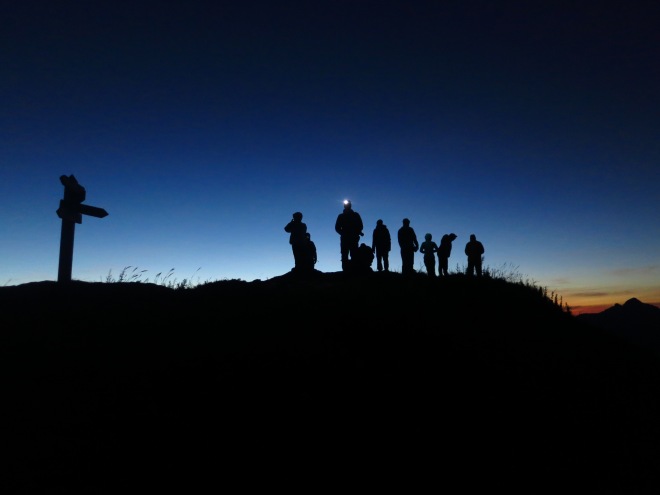 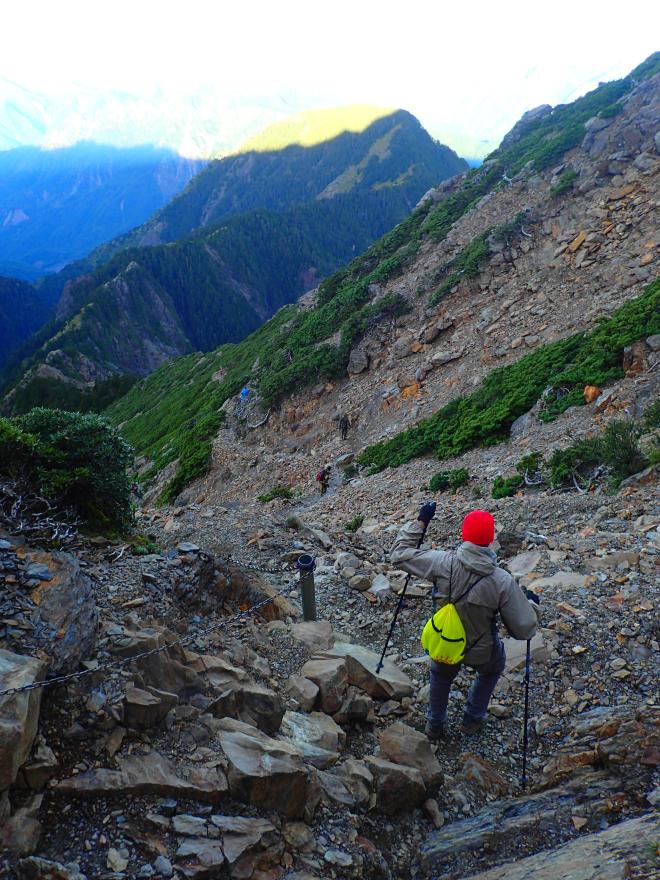 Let me start by saying I’m no expert at hiking Taiwan’s high mountains! Of the Top 100 Peaks (a list of one-hundred mountain peaks from the 270-odd summits in Taiwan that exceed 3,000 meters in height), I’ve so far only done 29 – a lot less than some hiker friends of mine. However I’m acutely aware that starting out on the Top Hundred can be be a bit daunting – the difficulty of the peaks on the list varies hugely, and while two or three summits on the list are within the ability of all able-bodied people, and a further ten or twenty can be conquered by anyone that’s reasonably fit and has a few Taiwan day-hikes under their belt, after that the difficulty level quickly goes through the roof, and inexperienced hikers could easily find themselves in serious trouble if they pick the wrong trek. END_OF_DOCUMENT_TOKEN_TO_BE_REPLACED 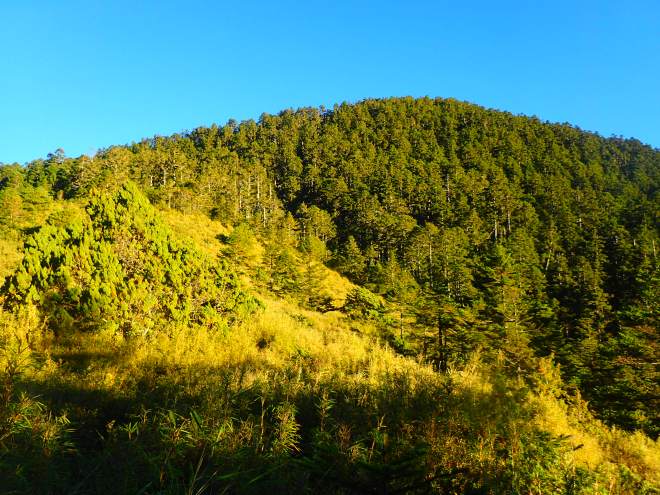 Dusk at Siyan campsite, day one 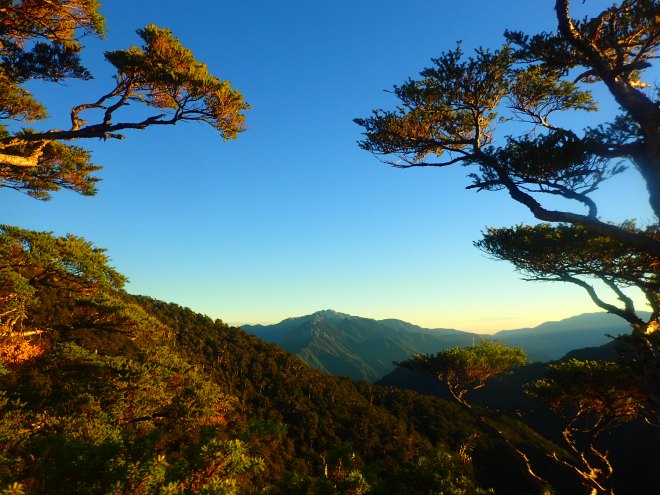 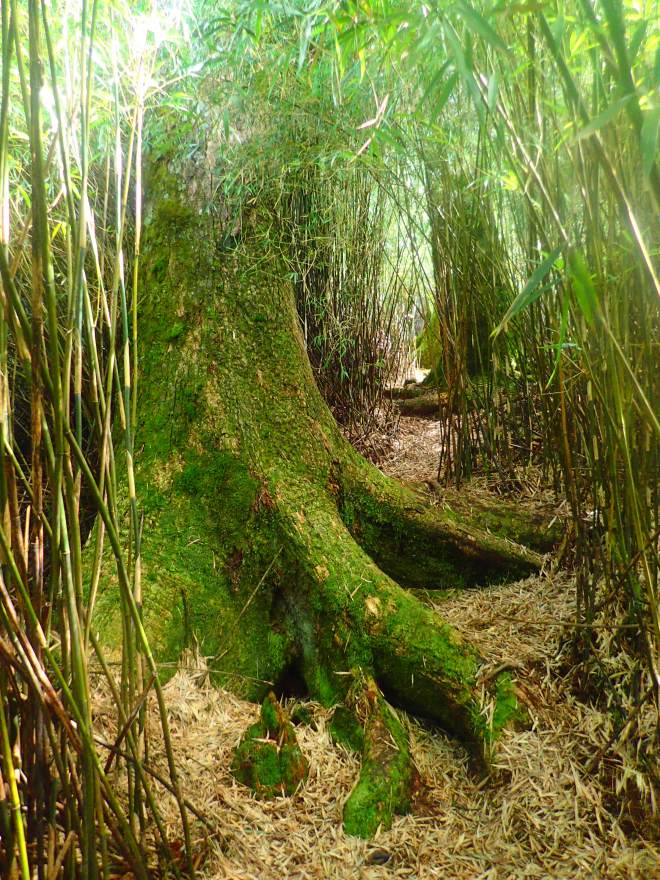 Mount Baiguda (3,341 meters, no 45 on the ‘Top Hundred’ list) on the border between Nantou County and Taichung City doesn’t seem to get nearly as much love as some of the other summits on Taiwan’s Hundred Peaks list. Permission to climb is easy to get (only a police permit is required), yet there were few other people up there this last weekend, despite the absolutely perfect weather. It’s among the tougher peaks on the list I’ve done to date, especially since we did it in 2 days (meaning a 14-to-16-hour second day of hiking!), but it amazed us all with its beauty. Photos I’ve seen on blogs and elsewhere are usually of the deceptively gentle, rounded, wooded summit dome, which looks boring as anything, but is in fact steep and very rocky, with a stellar 360-degree view from the top. Even more rewarding are the series of crags which the trail follows on the way to the final slog up to the summit peak – nothing technical or difficult, but plenty of tough, knee-breaking  ups and downs, and absolutely stunning views over the surrounding wilderness. Definitely one of my top five high mountains so far, and among the tougher ones too! END_OF_DOCUMENT_TOKEN_TO_BE_REPLACED 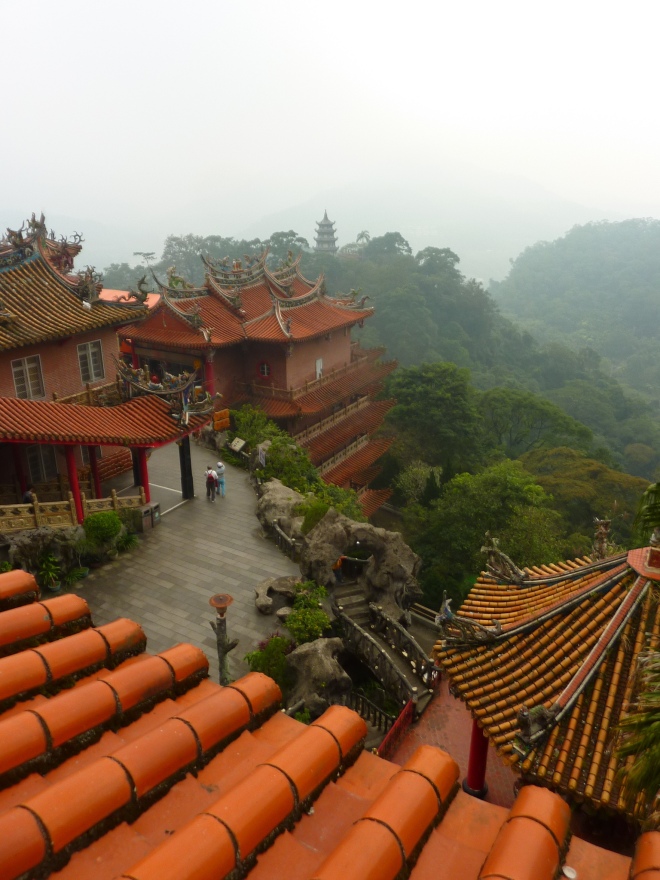 Shuiyang Lake, a beautiful creation of the great 1999 earthquake

In Taiwan 101 western Taiwan is everything from the Hakka lands of Hsinchu and underrated Miaoli, through Taichung City, Changhua, Yunlin (another under-explored corner of the island), and beautiful Nantou County. This long swathe of the island comprises the flat and (for a nature lover) relatively uninteresting western plains, but these are dotted with some of Taiwan’s most historic (and interesting) towns, the majority of Taiwan’s END_OF_DOCUMENT_TOKEN_TO_BE_REPLACED 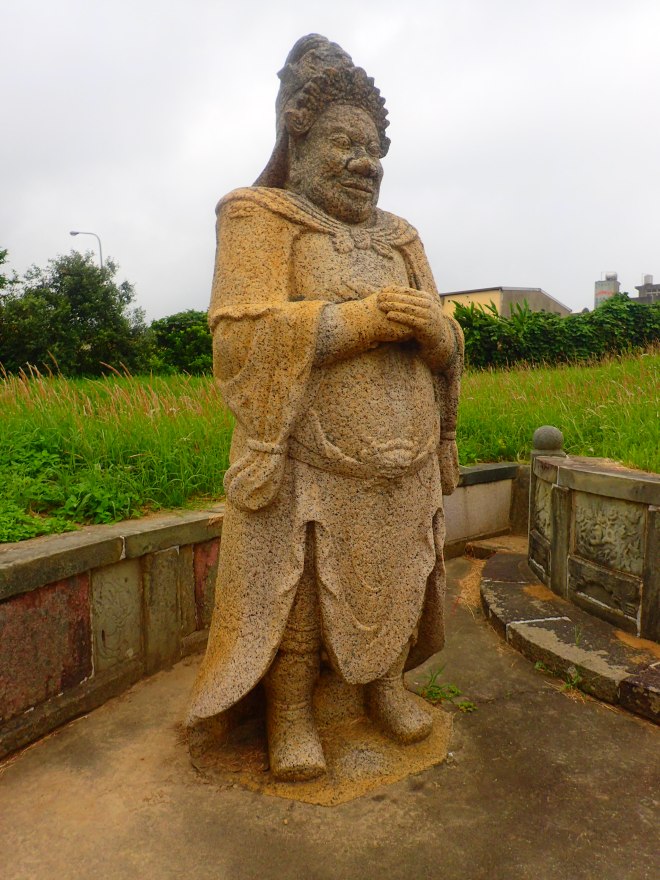 While the natural beauty of Taiwan will always be its greatest allure for me personally, the island also has an extraordinary wealth of cultural, historic and industrial attractions. Salt harvesting has been carried out on Taiwan for hundreds of years (with a history of eight centuries on the ROC-controlled island of Kinmen). Today salt production is a very minor industry here, but some of the salt fields (and a pair of unusual salt ‘mountains’) remain; the best have a strange beauty that’s quite unlike anything else on the island. Sugar, one of Taiwan’s biggest industries in the 1950s and 60s is now produced at only two sites on Taiwan, but some of END_OF_DOCUMENT_TOKEN_TO_BE_REPLACED 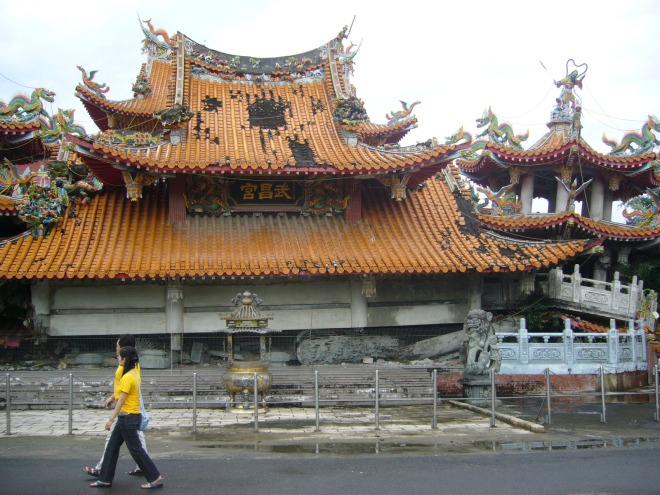 The famous collapsed temple at Jiji, near the epicentre of the quake

The Grand Canyon at Zhuolan 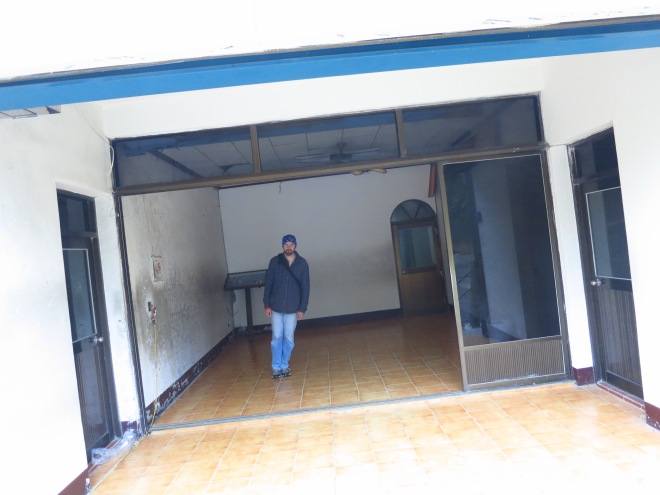 The sloping house at Jiufenershan 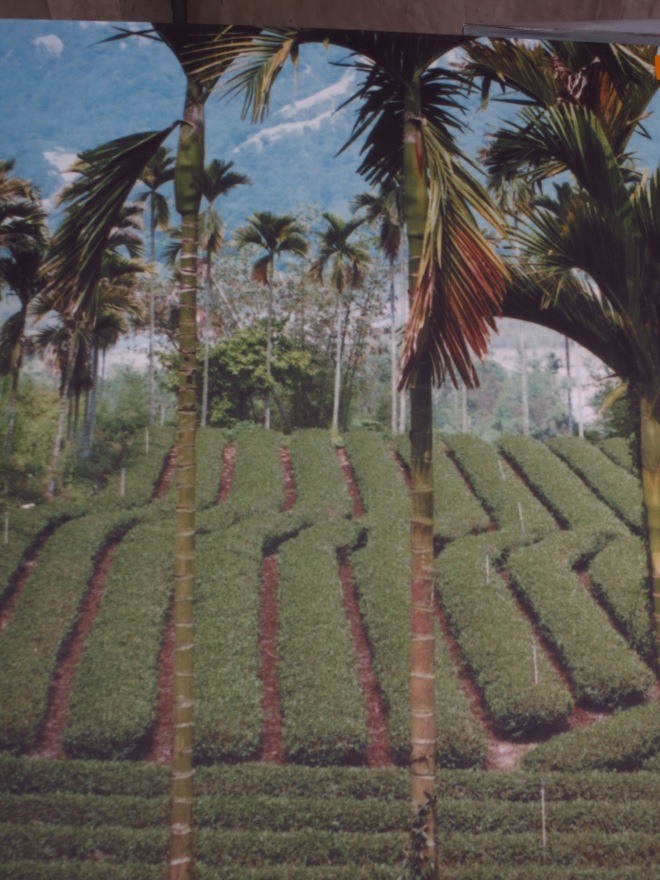 Photo in the 921 Earthquake Museum of Taiwan, showing tea fields on the line of the Chelongpu Fault, which ruptured during the eartlquake

At 1:47 am on September 21st, 1999, the most powerful earthquake to hit Taiwan in over a century (measuring 7.3 on the Richter scale) struck the center of the island, killing 2,415 people. Over 11,000 were seriously injured, and damage to property (many of the buildings that fell were shoddily constructed or designed to inadequate safety standards) was estimated at NT$300 billion.

The quake has become part of the national conscience (most people still usually refer to it as simply “921”, after the date on which it struck) and although the island has well and truly moved on, plenty of memories of that awful night remain to this day. Like Jiufenershan, a place guaranteed to bring home the primeval power of the catastrophe. END_OF_DOCUMENT_TOKEN_TO_BE_REPLACED 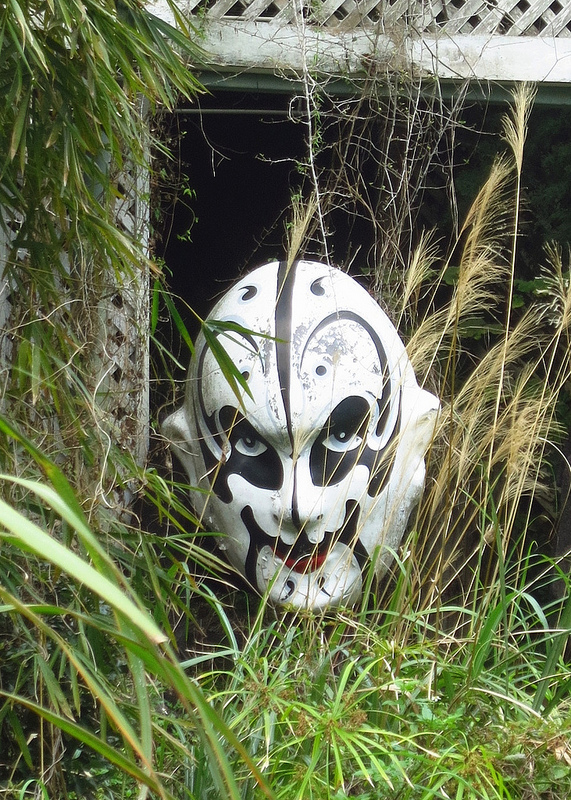 In the former Orchid Garden 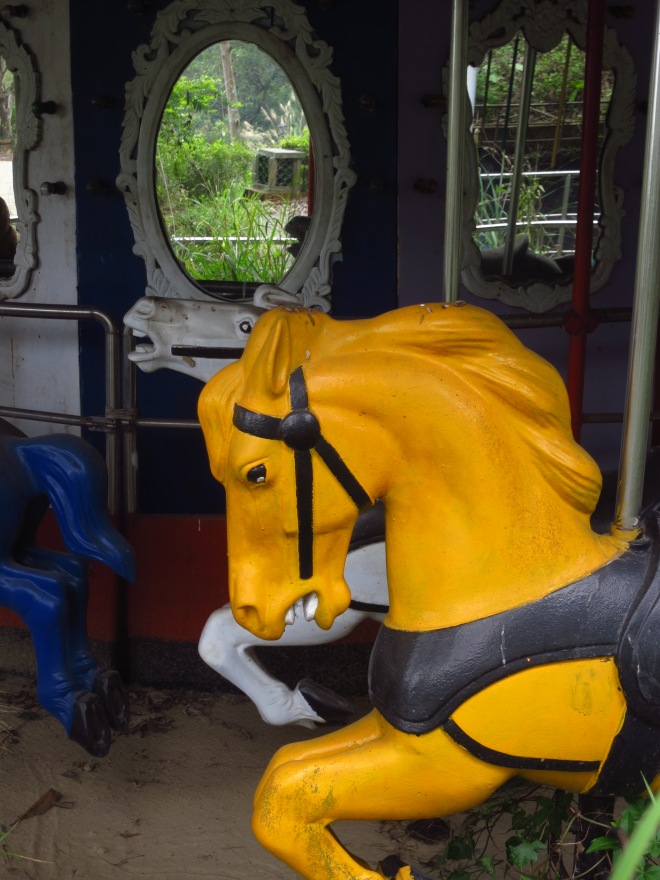 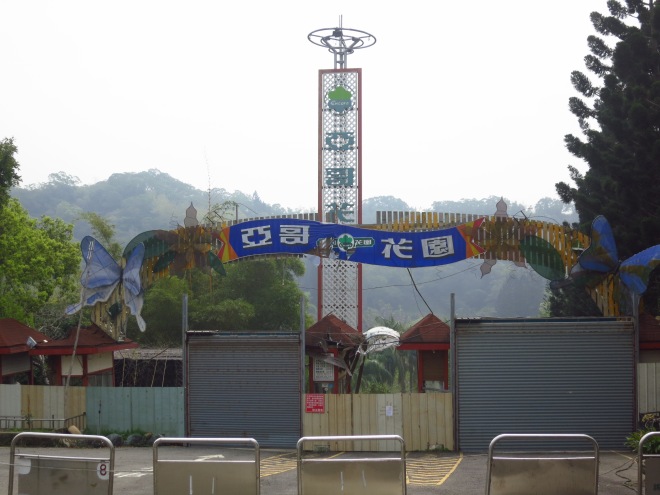 The entrance to Encore Garden

What is it about abandoned theme parks that makes them such irresistible place to explore – for some of us at least? Although there are apparently quite a number dotted around Taiwan, Encore Garden (雅哥花園) at Dakeng, just east of Taichung city, became pretty famous a year or so ago, probably after pics of it did the rounds on the Net.

END_OF_DOCUMENT_TOKEN_TO_BE_REPLACED 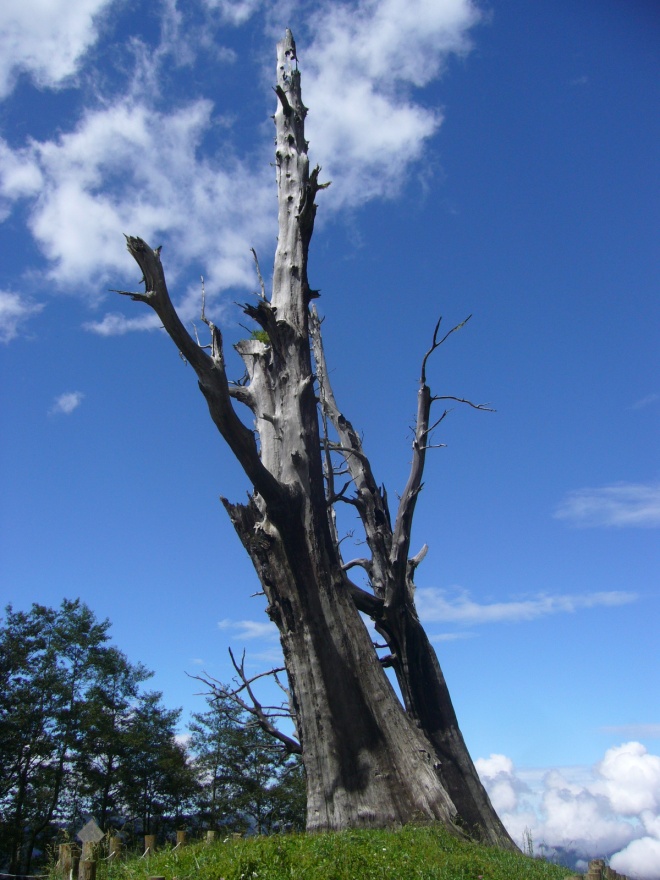 Above the aboriginal village of Laiji, Chiayi County

It’s been so long since I’ve been hiking that I’ve started putting on weight and seem to be entering a mild depression.  The plum rains seem – hopefully – to be loosening their grip on the island and there are hopes that we might have a good weekend exploring coming up (our last attempt, a scooter trip around the mountains of Chiayi three weeks ago turned into a soggy disaster). Meanwhile, partly as a little self therapy, and to replace my last, angry, post from top position where its been for the last couple of weeks, here’s a couple of photos from recent and not-so-recent trips around the main island of Taiwan. Thanks to Oksana for the ancient tree photo – much better than any of the ones I took myself!

On the road up to Luchang, an aboriginal village in magnificent countryside in Miaoli County

END_OF_DOCUMENT_TOKEN_TO_BE_REPLACED

Yuemei Cave, above Wudu, near Keelung

The routes to Ruifang, Nuandong Gorge and White Horse General Caves are described on pages 67, 45 and 197)

Until my right little finger finally heals, and allows me to practice piano for more than fifteen minutes

without swelling up (and God knows when that will be!) I seem destined to releasing my emotional energies on as many long hikes as I can, and on reliving various recent and long-passed adventures on this blog. At least this gives me the chance to look out and arrange some of the huge backlog of photos from trips around the island that are presently slowing down my computer….

My return visit to Huangdidian Bat Cave the other week has set me thinking about Taiwan’s  many other caverns. I’m no geologist, but Taiwan’s geological makeup doesn’t lend it to the formation of deep caves – there’s very little limestone here!  (Now my home country England – that’s a different matter – check out this Titanic cave, discovered only in the year 2000!)  Even Wikipedia, rather embarrassingly, has only one entry on its ‘Caves of Taiwan’ page – the well-known Baxien Caves on the coast of southeastern Taidong County.  Actually there are loads of ‘caves’ on the island, and although most are little more than impressive, wind-eroded overhangs in rock faces, Taiwan has a number of true caverns as well.

Sanmin Bat Cave, the largest of its kind in northern Taiwan

END_OF_DOCUMENT_TOKEN_TO_BE_REPLACED

The one thing I absolutely detest about Taiwan (sometimes at least) is the damn weather here! Lousy conditions have turned many a promising hike into a wet and slippery trudge, have led to me cancelling scores of others, and  (three or four years ago) even contributed to my avoiding high mountain climbs for several years, after a miserable three-day trip into the mountains when a group of us were stranded in a cold, damp mountain hut for the duration of a continuous downpour that lasted a day and two full nights!

The trailhead, above Wuling Farm