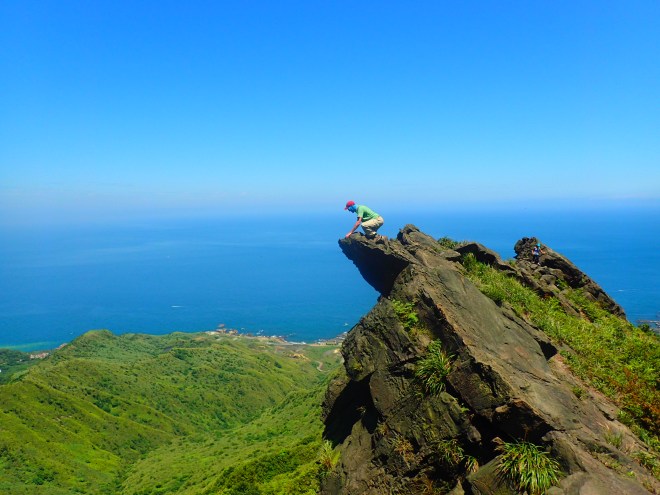 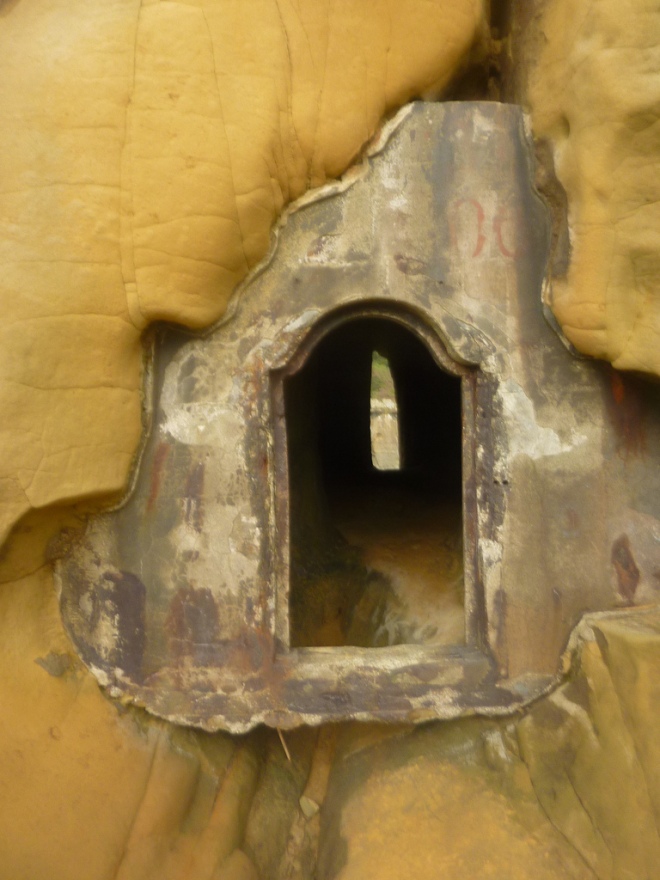 I’ve started exploring new places again, and should start getting back to regular blog posts in the next couple of week. Meanwhile, I thought I’d make a few posts giving a short overview (in photos) of my latest book, Taiwan 101, which aims to show the incredible variety of sights around Taiwan (and the ROC-controlled islands). It really is an amazing place, and I’ve come to realize this even more during the several years I’ve spent researching and writing the new books (there are two volumes), during which I’ve seen loads of places, attended a number of amazing festivals, and done quite a few things that I’ve never done here before. Hopefully I’ll get out six posts, one for each of the six main sections into which the two volumes of the book are dvivided.

First up: the north: Taipei, New Taipei City, Taoyuan City, Keelung City and Yilan County. Here’s a taste of the many, many places to END_OF_DOCUMENT_TOKEN_TO_BE_REPLACED

The Golden Grotto in Hualien County 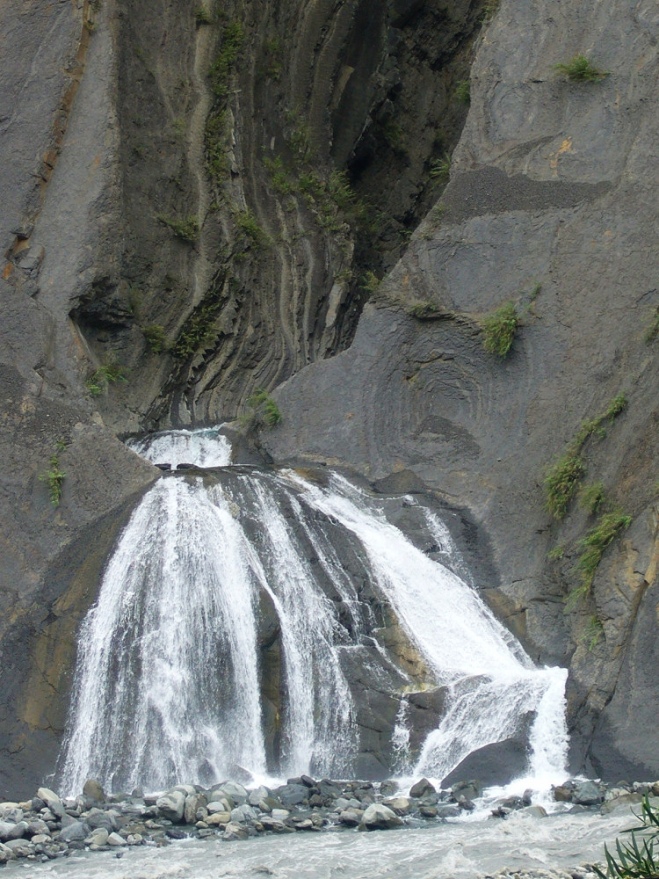 The Yuanyang Waterfall on the Xiaonian Stream in Kaohsiung County 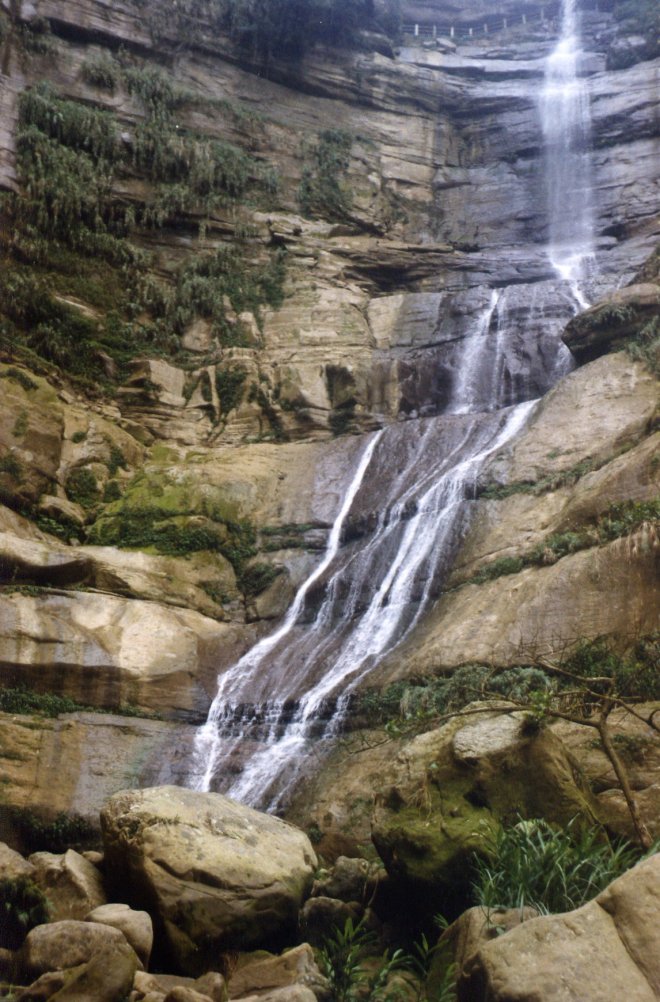 Taiwan is paradise for a waterfall lover like myself. It’s a bit of a joke among friends and family, but I’ve loved these things since I was a kid and used to scan guidebooks back home in England, reading about stunning cascades with rich and evocative-sounding names such as Cauldron Snout, Pistyll Rhaeadr, Falls of Glomach and Sgwd y Eira. When I finally passed my driving test (em…on the fourth try…) and got my first car, a Datsun Violet, there was no stopping me  – in a series of weekend trips and longer holidays I started methodically touring first Wales and then England, exploring all those waterfalls I’d read and dreamt about in books. Within a year or two the interest had become almost an obsession, resulting in me writing a book (sadly never published) covering the complete waterfalls of England (totalling some 370… named examples).

It would probably be near-impossible to see all the waterfalls in Taiwan even if I made it my full-time job, since they are just too numerous and many are simply very remote or otherwise difficult to reach, so it’s just as well I’ve at least partly grown out of my youthful obsession. Waterfalls are still an irresistible magnet  however, and I’m never happier on a hike then when it includes at least one (but preferably more than one) waterfall. END_OF_DOCUMENT_TOKEN_TO_BE_REPLACED

White Veil Waterfall (thanks to Nick E for the photo) 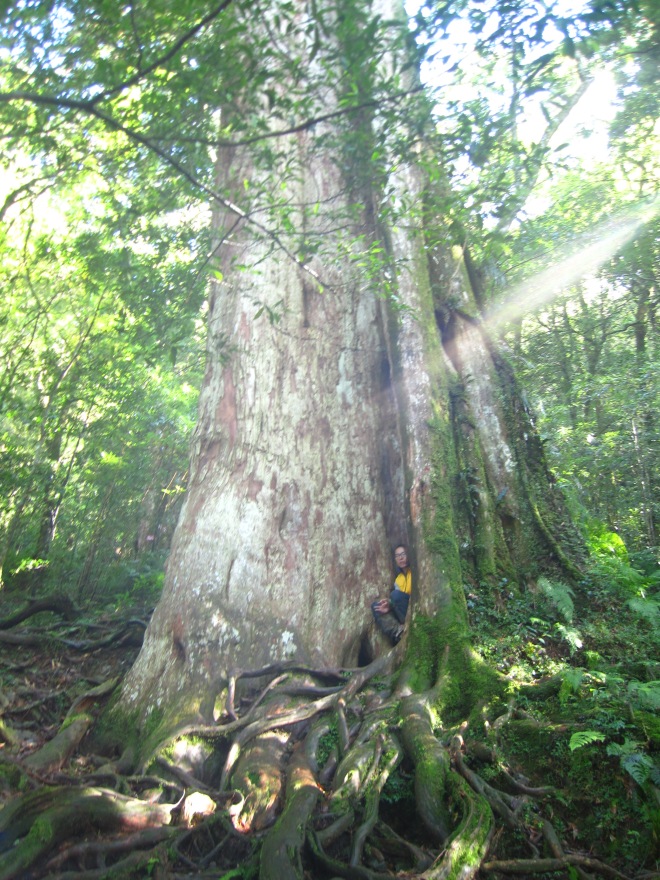 The walk (including the trail to White Veil Waterfall) is described on pages 194-201).

Mount Beichatian (北插天山: 1,727 meters) is such a popular challenge hike (it’s the highest peak that can reasonably climbed as a day trip from Taipei) that I (and I’m sure many other weary, muddy hikers) fail to appreciate just how beautiful it is while panting up its steep, seemingly never-ending ridge. Good weather does of course make a great difference, so that’s probably why my third trip there, on a weekend in mid October that turned out unexpectedly nice, was the first time that I really noticed its extraordinary scenic merits.

The first time I climbed the mountain was as a day trip, coming in and out from Manyueyuan, near Sansia in Taipei County, and although we made it up and back in daylight, my main memory of that climb was how damned muddy the final section to the summit was. It was nearly a decade later when I climbed it again, 2 years ago (in 2011), with a group of Taipei Hikers. This time the trails were very much better, with wooden boardwalks in places on the trail up to the campsite, and log ladders up the steepest muddiest parts of the summit trail. For this trip we decided to split the trip into two days, camping the night in the idyllic wooded ‘spring’ (水源) campsite on the shoulder of the mountain, which worked great, because it gave us time to explore the nearby Yunei Stream Ancient Tree Grove on the second day before heading down. END_OF_DOCUMENT_TOKEN_TO_BE_REPLACED

Late notice, I’m afraid (juggling loads of balls at the moment, with a small recital coming up, the book in layout and proof at the same time and a big summer trip in the intensive planning stage besides all the usual distractions and work), but this Saturday we’re off to Datieliao Old Trail in Taoyuan County (I know the TAS Spring Fair is on the same day, but Sunday the weather is due to change for the worse).

Datieliao is a really lovely walk and not hard by our usual standards. It’s also a very good first step for those who are comfortable in walking ‘ordinary’ dirt trails and want to try a hike with a few easy rocky pitches. END_OF_DOCUMENT_TOKEN_TO_BE_REPLACED 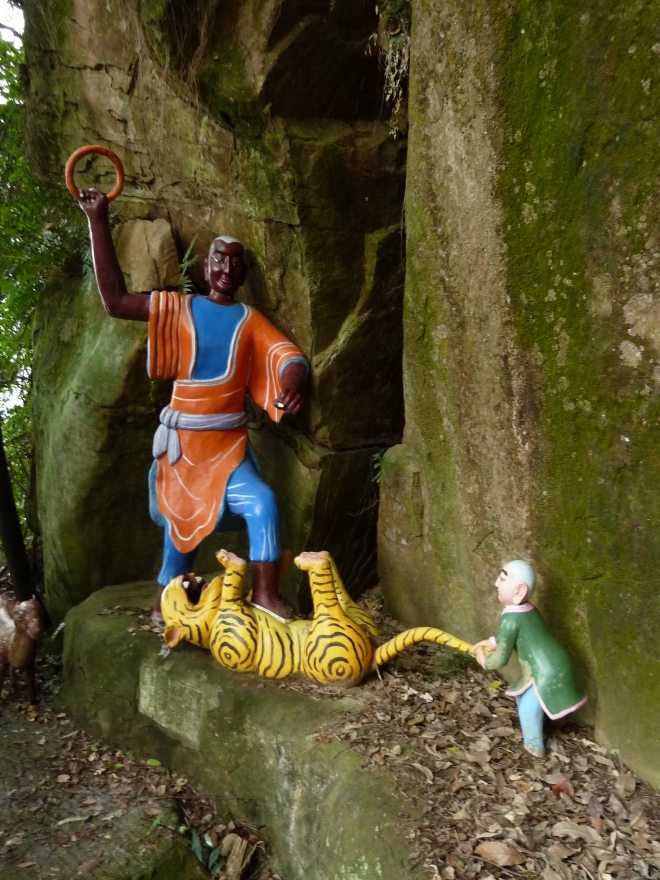 Just two weeks back from England, and I’ve been hiking five days a week (before class, all-day at the weekends) trying to get these darned books completed. Nearly there, with just eight hikes to go.

The weather didn’t cooperate the two weekends I was back for organising a group hike, but I’ve saved four great hikes for  definite group outings in February and March, so hope some of you can make them! I’m off to the airport in, er, two hours to fly to Bangkok en route to the mystical kingdom of Bhutan (yeeeeh!) for a couple of weeks , but will be back mid February, ready for at least four more hikes in Taiwan.

Meanwhile, here are just a couple of the places I’ve been visiting (all in the new books, so buy them if you wanna go too!!) this last two busy, busy weeks. 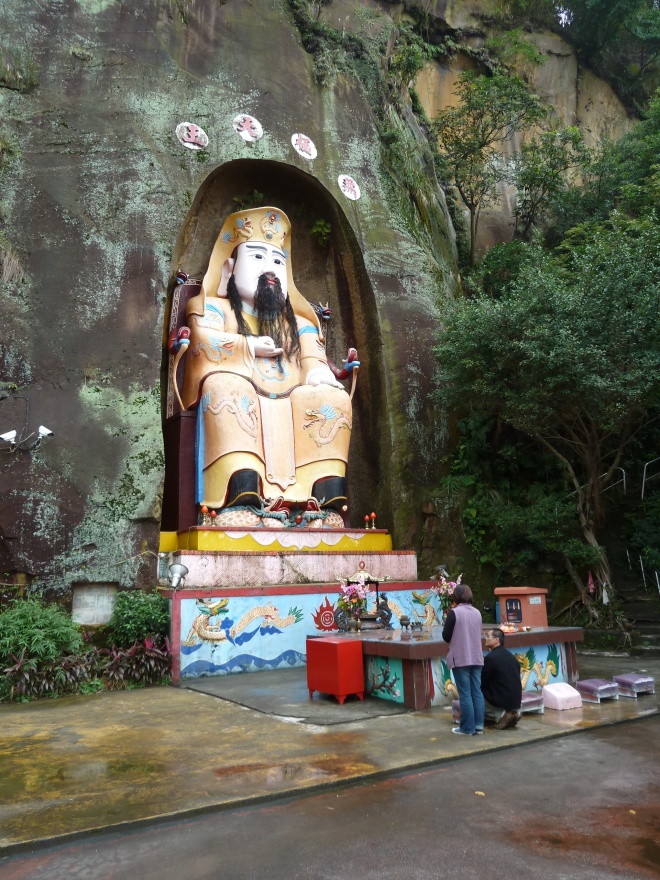 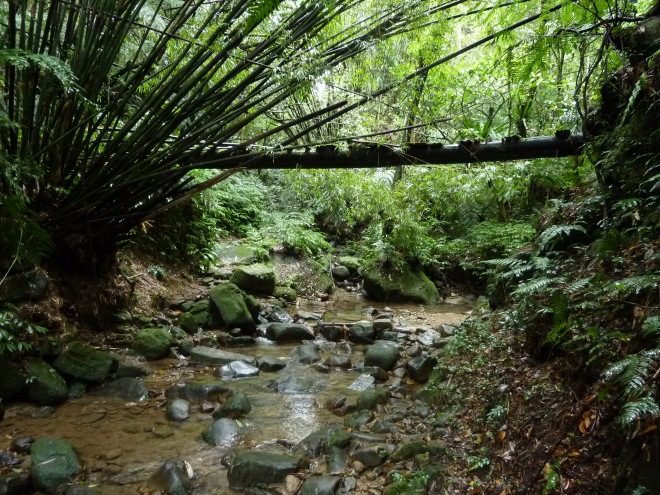 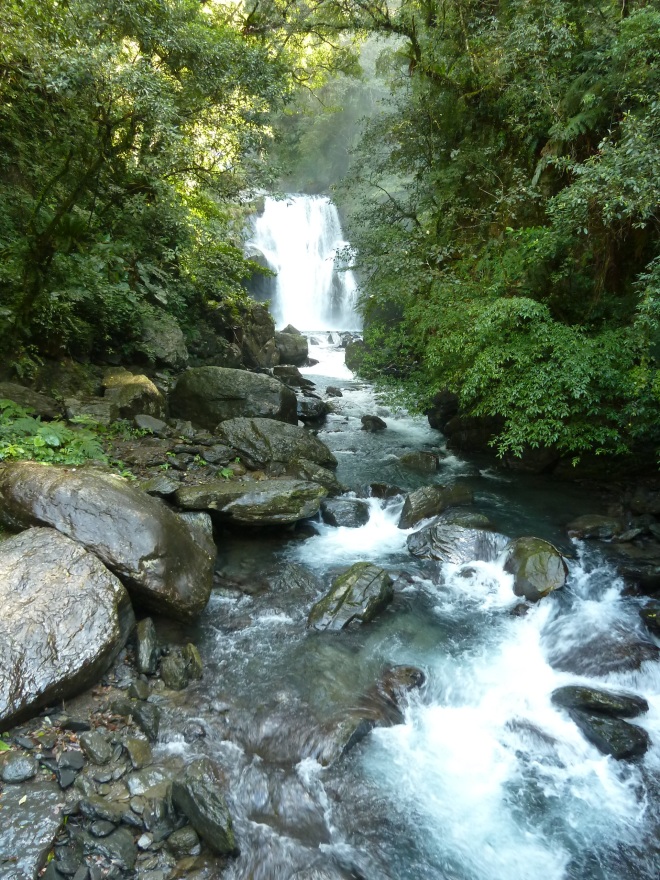 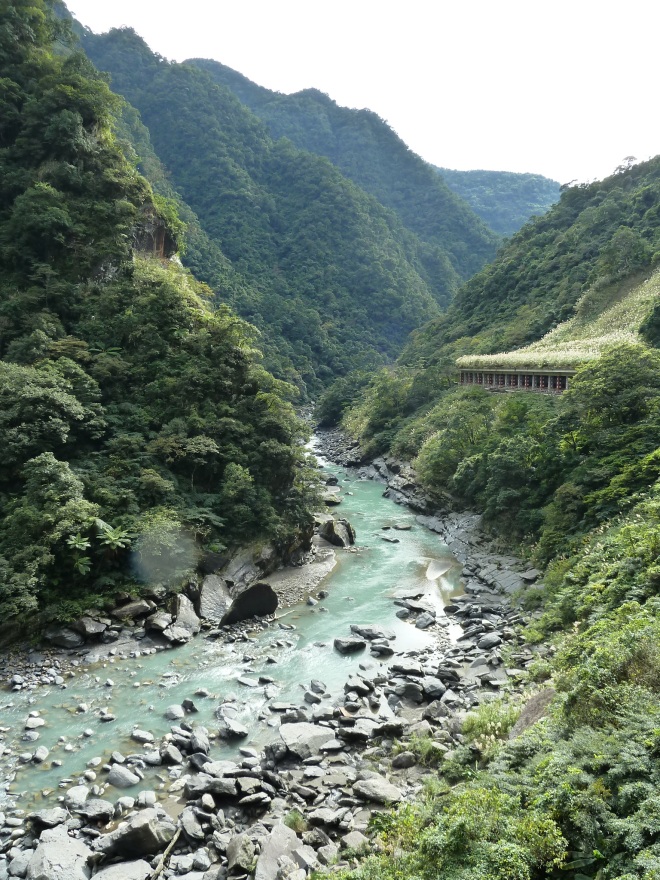 Gorge between Wulai and Neidong 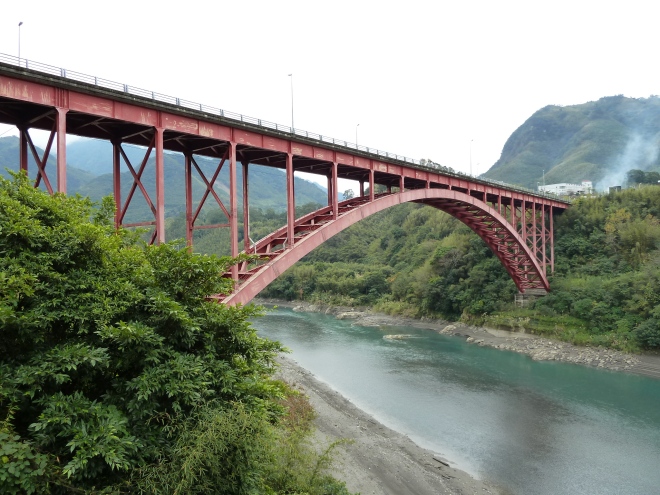 I despair at getting any more hiking done on the northeast coast area before Christmas! Last weekend’s ‘long’ hike turned into a wet couple of hours scrambling through the mud, and we gave up after the Stone Bamboo Shoot. I really cracked that day, and so to ease my frazzled nerves, I’m planning to ignore the area altogether for the next few weeks  unless the weather forecast is looking really good.   END_OF_DOCUMENT_TOKEN_TO_BE_REPLACED