Summer 2010 has become a series of island vacations as my plans changed from travelling around eastern Indonesia to exploring Taiwan’s offshore islands. However the chance discovery of a cheap package deal last weekend saw me and David heading out to a place I’ve been intrigued by for many years: the island of Guam, a territory of the US in the western Pacific.

Arriving at the island’s airport after a 3.5 hour flight from Taiwan, we’re greeted with the words ‘Welcome to the Beautiful Island of Guam‘ posted in big characters on the wall of the arrival hall.  The Americans seem mighty proud of their outpost on the Asian side of the Pacific Ocean (they’ve even coined a clever and memorable slogan for it, calling the island the place ‘where America’s day begins.’  However Hawaii this certainly ain’t. Sure, the beaches are splendid, the hotels on the main tourist strip, Tumon Bay, are appropriately luxurious, and the diving is so good I was half inclined to do a refresher course and replace my aged dive logbook (my last logged dive was back in the late 1980s!).  It’s a fantastic place for wonderful American restaurants (steak and ribs every night!), fine coral sand beaches, infinity pools, drinks at the poolside bar, and fabulous sunsets with warm and very friendly locals to boot.  Unfortunately I always want more, and away from the coast, Guam isn’t quite so hot, for although there’s some attractive hills in the south and a handful of  small waterfalls, there’s little to set the pulse running, or get the explorer instincts flowing, at least for those of us so utterly spoilt by the endless riches of Taiwan’s magnificent landscapes. 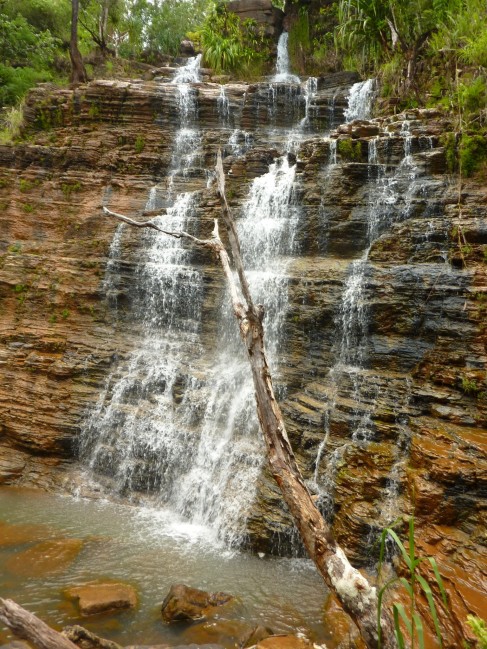 Tarzan Falls, one of the most popular (and easiest to find) of Guam’s many small waterfalls

The first, and perhaps the greatest challenge facing any visitor to Guam is getting hold of any information on where to go and what to do on the island, assuming you want to do more than go sunbathing on the beach, shopping (there’s plenty of that), play golf or go diving. Even the Lonely Planet is conspicuously silent on the subject; they’ve yet to cover the island in a guide, and although they do have a webpage devoted to the island, there’s little on it save some pretty photos and a couple of suggestions on places to see.  Elsewhere on the Web, there’s a rather sorry-looking official website, although it too is rather threadbare, with little detailed information. 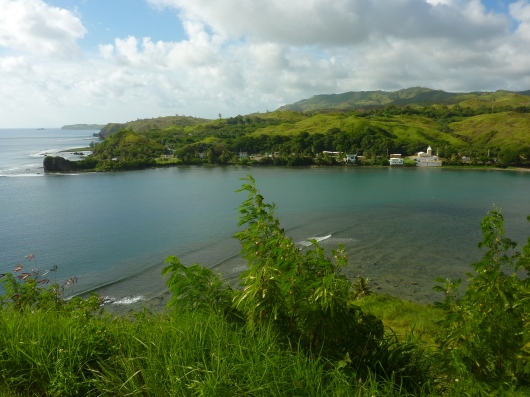 Arriving on the island  the situation hardly improves. After searching a number of shops with no luck, we finally found a map of the island.  Apparently there also used to be a book describing  hikes on the island, only it’s currently out of print. Other than that would-be explorers are on their own.  There are, apparently places worth visiting here, but short-term visitors will have to prepare in advance to enjoy much of it. 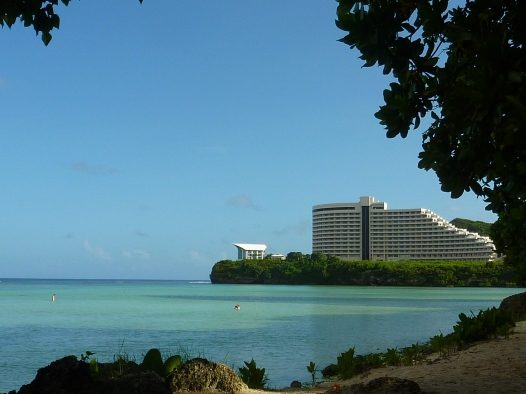 Luxury hotels and blue, blue water are what Guam is all about

The best scenery on the surprisingly densely populated island (which, despite being the largest island in Micronesia, is still just a tiny speck, 20 miles long by up to 12 wide) is in the far south, where grassy hills rise out of the ocean above attractive old villages such as Inarajan and Merizo, each with a couple of ruined old historic buildings and some quaint, if dilapidated houses. The highest point on the island, Mount Lamlam, is here, rising a modest 406 meters above the ocean, and looks just like most of the other summits that stud the island’s attractive southwestern corner, yet this humble peak is sometimes described as the world’s tallest mountain, a daft claim ‘justified’ by the fact that Guam rises out of the depths of the Marianas Trench (the deepest area of the Earth’s Oceans and  lowest point on the Earth’s crust), giving the hill a total height of 38,300 feet, over 9,000 feet taller than Mount Everest, if measured from the ocean floor! 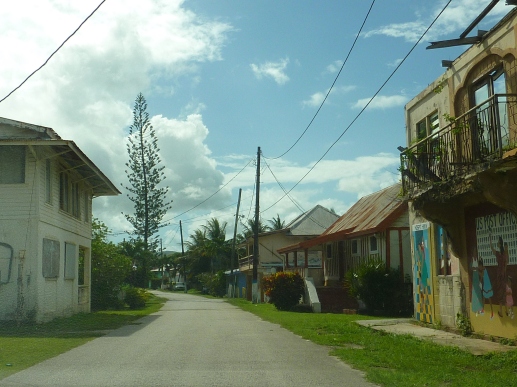 Quaint old houses in Inarajan village, one of the oldest in Guam, founded in 1680

A far more impressive eminence is the Two Lovers’ Point, an impressive vertical cliff face that towers above the ocean just to the north of the tourist ghetto of Tumon Bay on Guam’s west coast. It’s only a minute’s walk from the car park to the viewing platform which juts out over the precipice, but the view over the aquamarine expanse of ocean and the highrise hotels on the beach below, and the wooded coastal slopes to the north is splendid. Also very impressive (and far less touristy) is Ritidian Point, the northernmost tip of the island, a nature reserve protecting a magnificent, wild stretch of coral-sand beach, some impressively Jurassic-looking cliffs and a beautiful reef whose parti-colored corals and sponges were exposed to plain view on our visit, during a low spring tide. The road up to the beach skirts the US Anderson Airforce Base, hidden from the road behind an impenetrable curtain of jungle (for the best, albeit distant view of the secretive base, drive to the top of Mount Santa Rosa on the northeast coast.). The third (and last!) place on the island that really intrigued was the Talofofo Caves (also called the Asquiroga Caves), natural caverns in the coral cliffs high above the eastern coast, reached by a short but sweaty climb along a trail (for once clearly marked!) from route 4A. Four short spur trails, marked with trail ribbons veer off the main trail through the jungle to the various caves (two if them impressive vertical chasms disappearing into the black void), used by soldiers during WWII as hiding places. 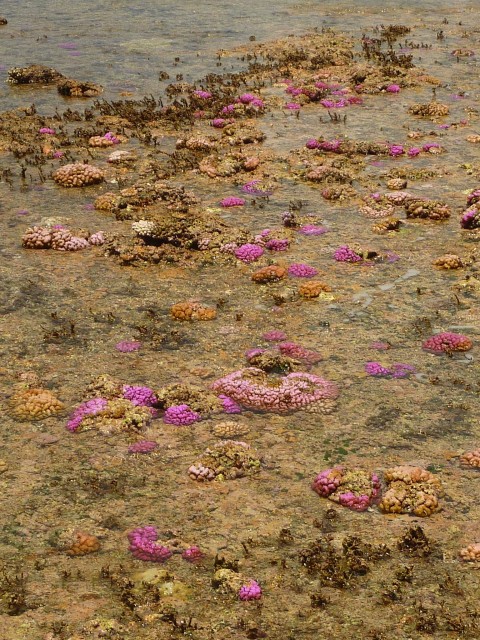 I couldn’t really recommend most of the other places we attempted to visit. A glance at our map offered the promise of some intriguing destinations, but almost every time we were either frustrated, underwhelmed, or both.  Here’s our miserable record:

Devil’s Punchbowl: A deep and apparently rather impressive sinkhole  in the coral, hidden in the woods just a hundred meters from the main entrance of the Hilton in Tumon Bay. Should be easy to find? We asked directions from the next door official tourist  office and two hotel doormen; none of them had ever heard of it, and, hot and irritated, we gave up and moved on.

Gadao’s Cave: on the island’s southeastern coast apparently contains ancient petroglyphs. A plaque bearing the cave’s name stands beside the road in the proximity, but despite a long search and detailed directions from a local, we  never found the darned thing. 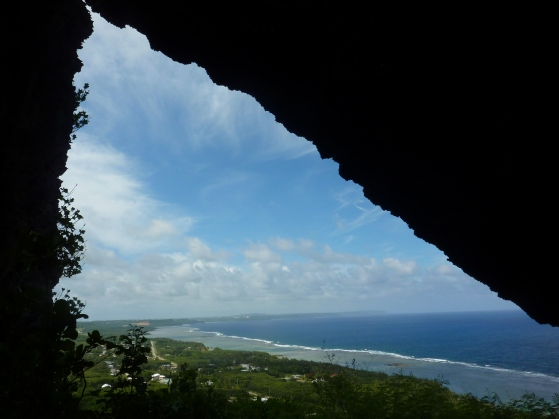 View from one of the Tarofofo Caves, hiding places for Japanese soldiers during WWII

Tarzan Falls: The most popular waterfall on the island, it takes a little guesswork to find the correct way from the marked trailhead to the falls as multiple four-wheel drive tracks confuse the route. Once on the correct trail, it’s only a twenty-minute walk fringed with beautiful tall flowering orchids down to the top of the waterfall, a rather inviting place where a wide brook runs over a series of small rocky steps among light woodland. From the bottom, although the small main fall is attractive, the stream is dirty and polluted, discarded water bottles bob in the water, and many of the trees are reduced to dead, silvery skeletons. It’s hard to believe this is a popular swimming spot with locals and American soldiers alike.

Fintasa Falls and Inarajan Scenic Vista: No hint of any vista, scenic or otherwise, at the point marked on the map, and no sign of any trail to the falls (which look great in postcards), but instead yet another ho-hum cluster of whitewashed bungalows on a grassy hillside.

The entrance to the underground shelter in which Japanese soldier Shoichi Yokoi, unaware WWII was over, hid for over 28 years

Sella and Setti Falls:  No trace of either waterfall , or even a stream for that matter. Do they even exist?

Namu Falls Botanic Park: The entrance gate is falling apart, and is boarded up and presumably permanently closed.

Talofofo Falls Park: Outrageously touted as one of Guam’s most important sights (photos of the falls appear everywhere on the island and in the official tourist literature), this place shamelessly cashes in on its worldwide notoriety as the location where Japanese soldier Shoichi Yokoi famously hid (not realizing the second World War was over) for an astonishing 28 years until he was accidentally discovered by fishermen in 1972. Certainly it’s fascinating to see the location of the cave (actually a small tunnel dug out of the earth; a replica has taken the place of the original cave, which collapsed in a typhoon) but to see the cave, take  the cable car ride down into the valley (at just two minutes long, by far the shortest I’ve ever taken) and see the two waterfalls (disfigured by concrete paths,  colored viewing platforms and bridges), there’s a audaciously high US$20 admission fee.

Talifak Spanish Bridge: Another landmark often seen in the tourist literature, we actually drove straight past it twice before finally finding the bridge, a fragile, half-ruined structure crossing a small brook next to a rather smart residence.

After two days exploring with little to show for our efforts, we finally admitted defeat, returned to our hotel at Tumon Bay, and joined the other tourists in appreciating the wonderful American restaurants (steak and ribs every night!), the beach, the hotel’s infinity pool, drinks at the poolside bar, the island’s famous sunsets and the hospitality of the very friendly locals.

This last of our trip to Guam, needless to say,  was an infinitely more enjoyable experience than the first two….

Getting around: This is America, so you’ll need a hire car to get almost anywhere (although for trips to Tumon Bay’s restaurants and shopping malls there’s a regular  shuttle bus).

If you’re really set on hiking on the island, forget the map available in the two bookstores on the island’s capital, Tamuning and in some Circle K convenience stores. It looks great and lists loads of intriguing places, but many of them are almost impossible to find. It’s good for route finding with the car, though. There is a well established tradition of hiking here (where it answers to the quaint local name of ‘boonie stomping’), but unless the local hiking book gets re-printed (it is apparently being revised) you’ll need to contact someone in advance, as from our experience, finding any trails to follow is a deeply frustrating experience. The man with all the info is Dave Lots, organiser of Guam Boonie Stompers (davelotz@ite.net , phone 653 2897). If you’re on island at the weekend, Dave organises a hike every Saturday morning, to a different place each time, and of widely varying difficulty.