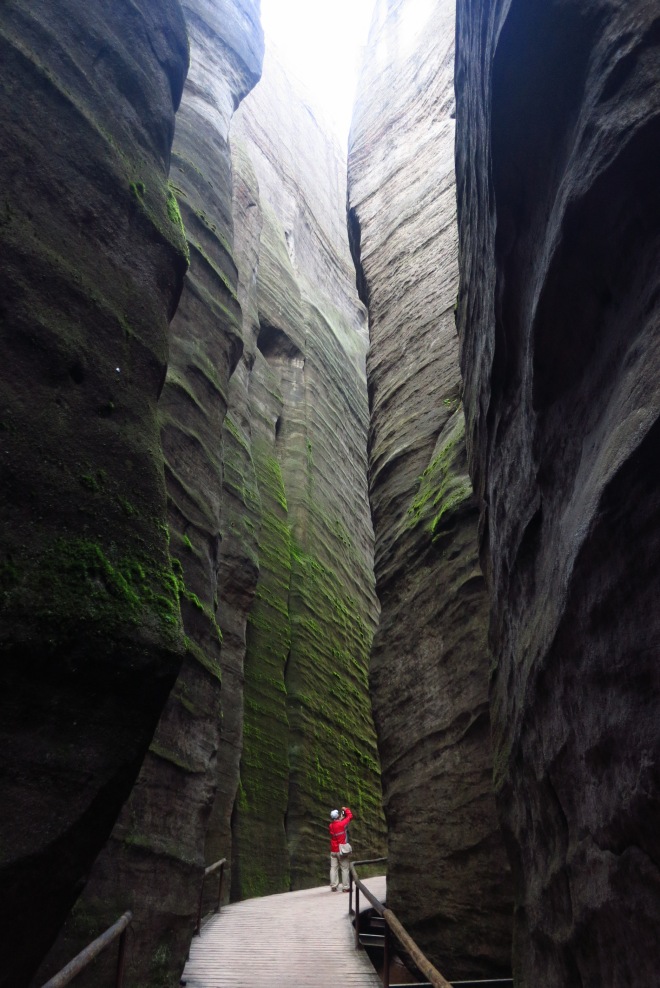 One of the many narrow chasms at Teplice 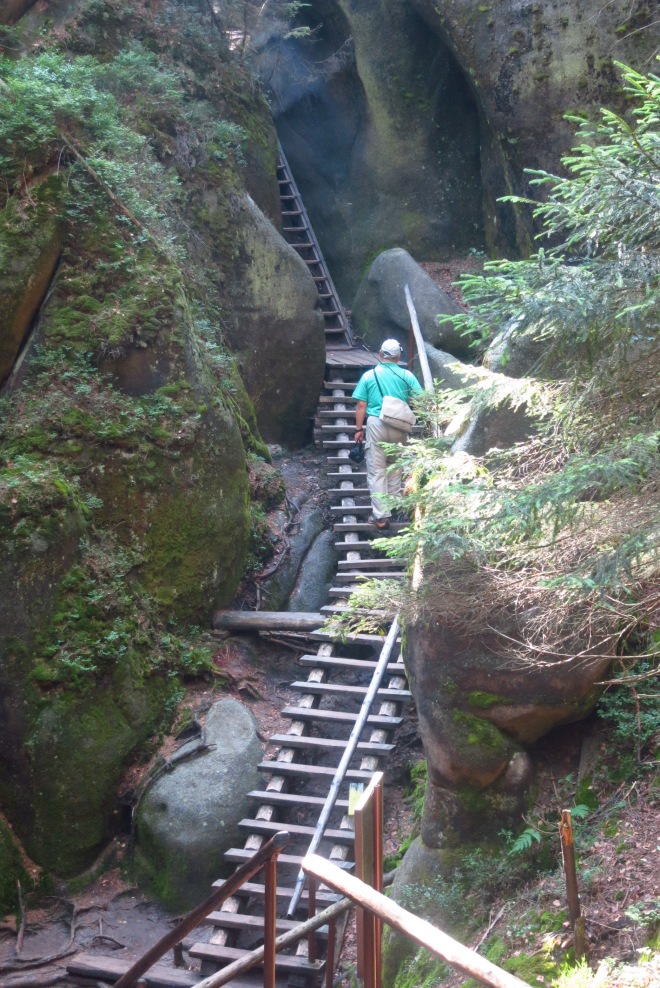 Off the tourist paths

Looking at photos of the amazing ‘rock town’ of Adrspach-Teplice Rocks, it’s easy to assume that this is someplace in China, perhaps. Certainly before I went, I’d never have guessed such an arresting landscape could have been found in …the Czech Republic… but yep, it is – up near the Polish border, about 170 kilometers from Prague, and the largest and most spectacular of several geological curiosities found in this part of Europe, both in the Czech Republic and over the border in Germany, near Dresden. 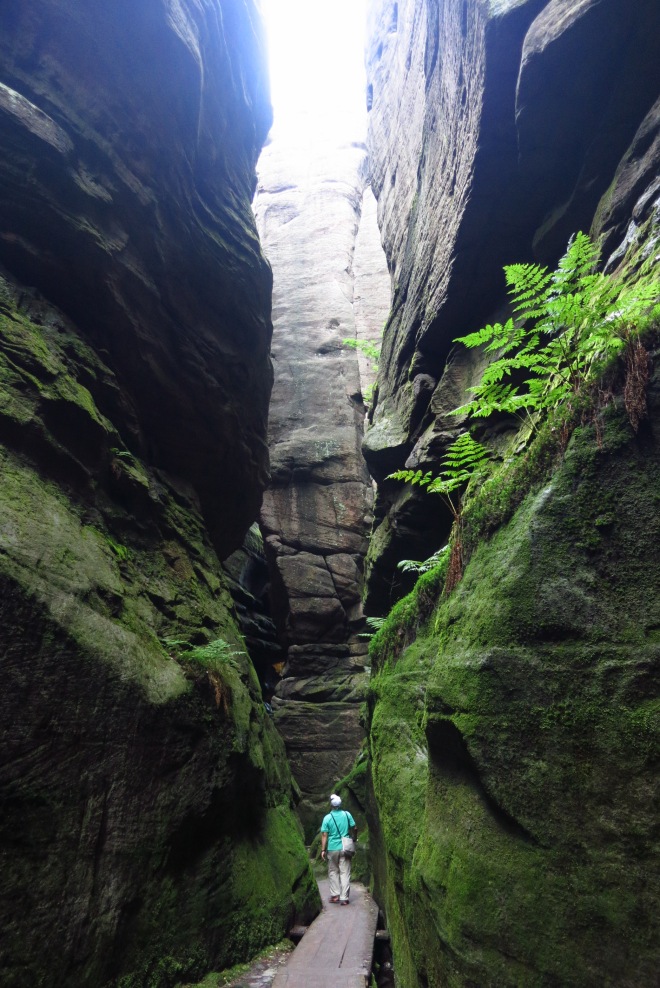 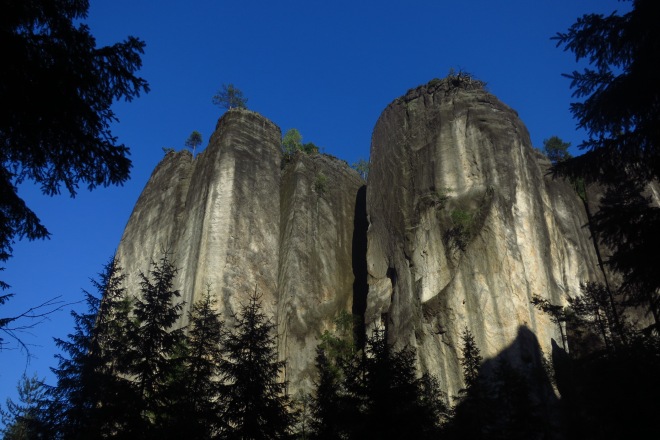 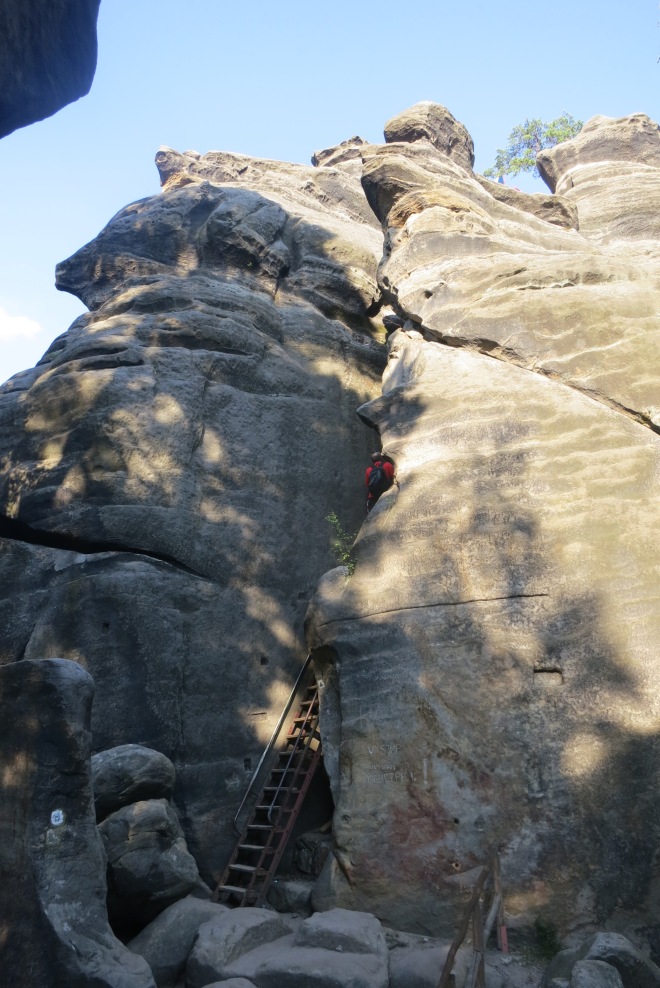 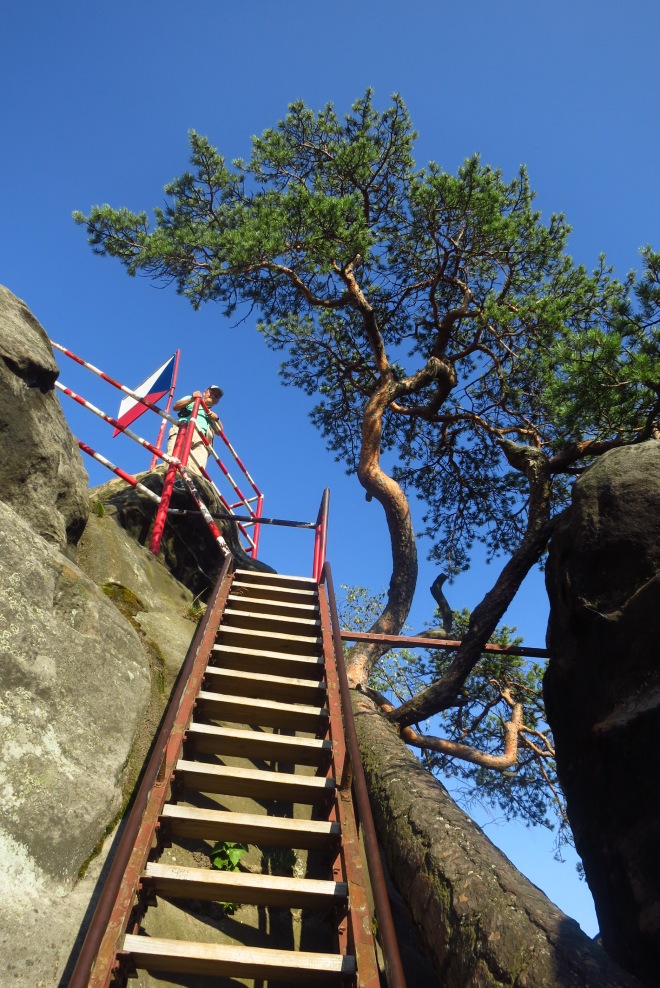 Near the top of Strmen 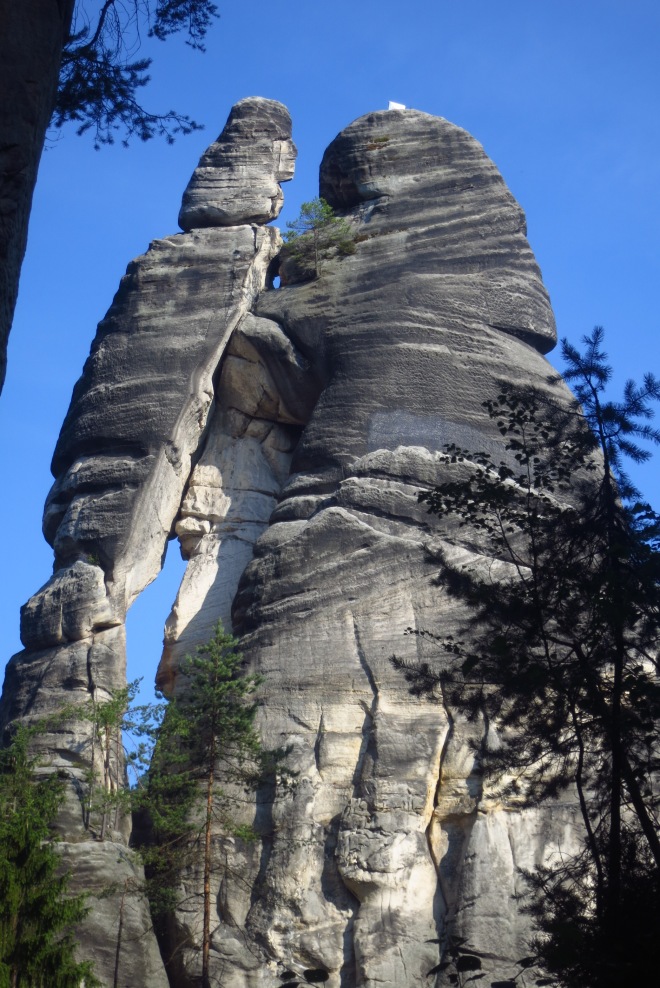 Exploring the Adrspach-Teplice Rocks is an enthralling experience, partly because the area is remarkably peaceful and soporific, despite the increasingly large numbers of tourists that are making it there these days, and partly because the landscape is such an awesome anomaly in an otherwise rather spectacularly un-rugged country. 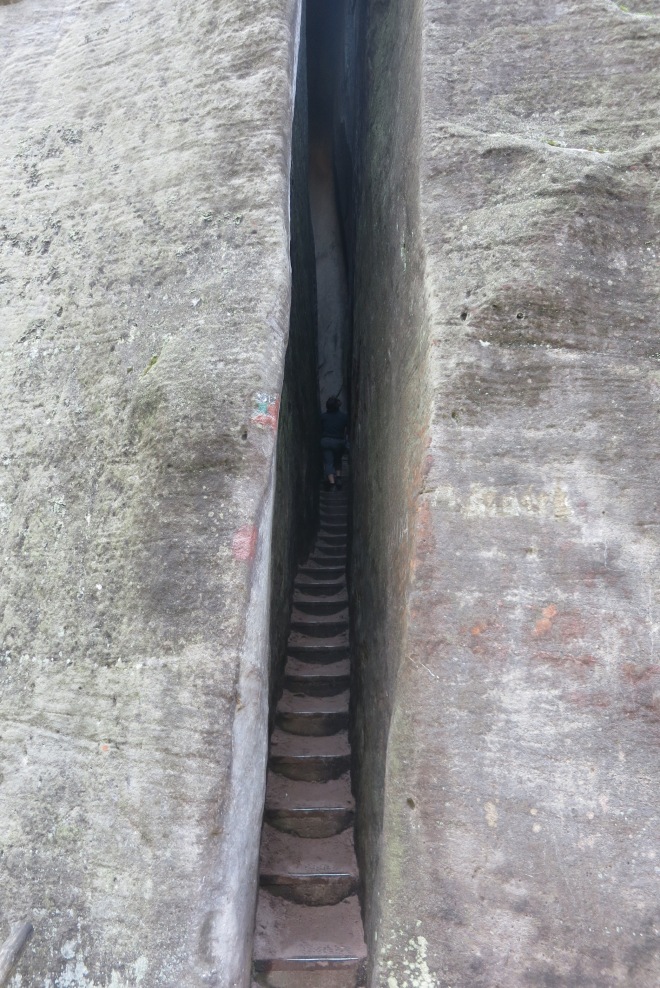 In the Mouse Hole 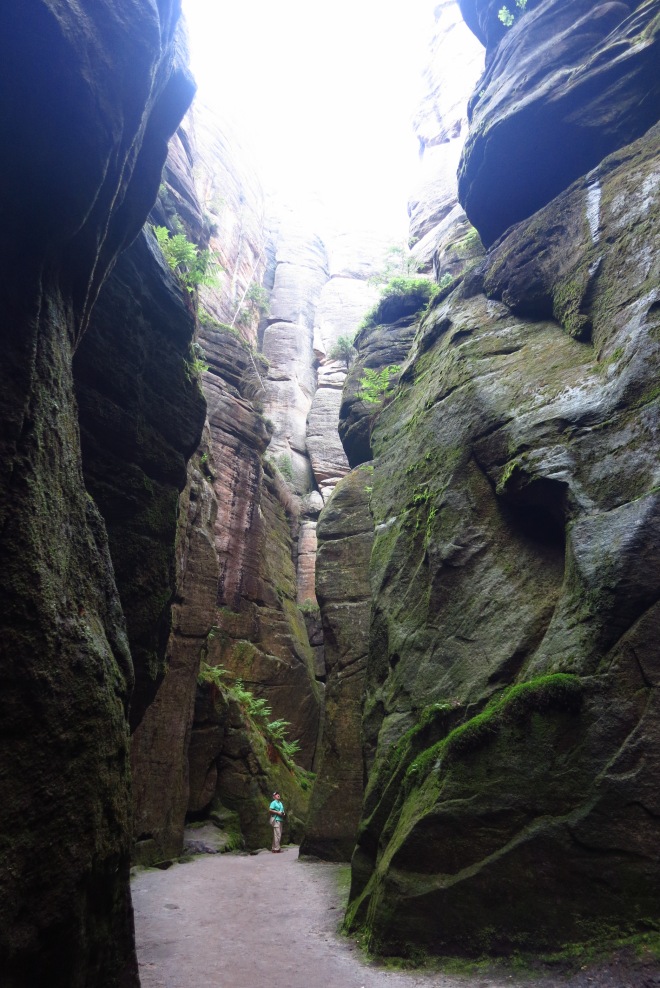 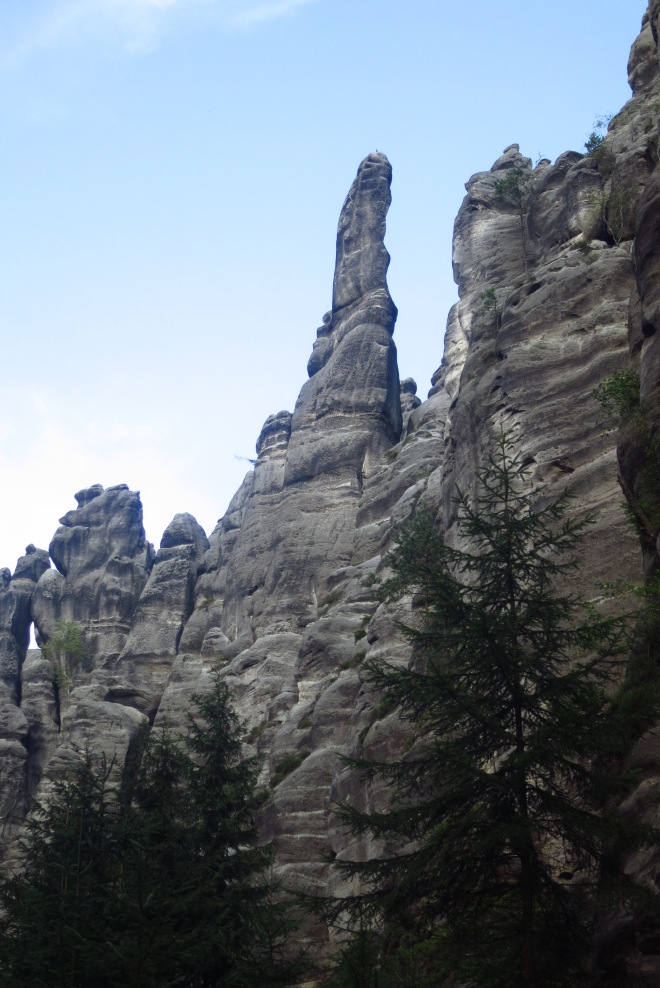 The rocks are divided into two parts: Adrspach (which has the tallest and perhaps the most impressive columns) and Teplice, a few kilometers to the south. A loop trail encircles the most impressive rock formations in each of the two areas, which are linked by a raised boardwalk path through the attractive wooded Wolf Gorge, which makes it possible in a longish day’s walk to see both rock towns. Getting to Adrspach-Teplice is inconvenient enough though to make an overnight stay and a more leisurely trip worthwhile though. Despite the spectacular nature of the landscape here, the main trails around the various rock formations are firmly family friendly; happily though, there seems to be ample scope for (discrete) exploring off the trails, with some very interesting features such as long ladders secreted in deep off-the-path clefts and trails heading up steep banks into the rocks that promise some rich exploring possibilities. 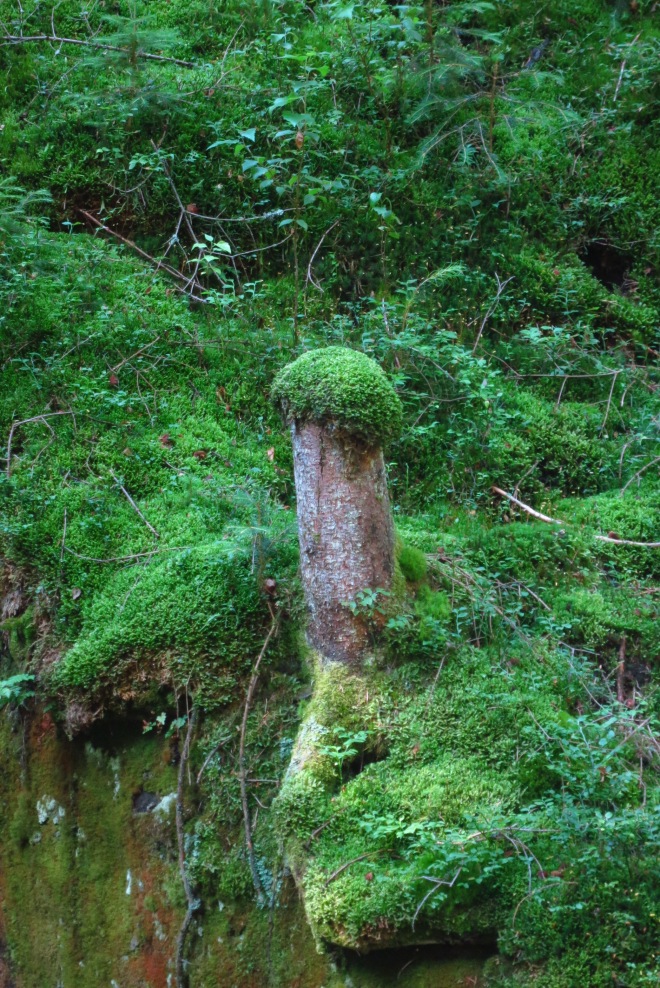 If (perish the thought!) there was time to see only one area of the nature reserve, then the 6 kilometer-long loop trail through Teplice Rock Town would probably win the day, if only for the amazing clefts of the Chapel (whose walls, just a few meters apart, tower over seventy meters (which looks a lot more spectacular than it sounds), and Siberia, one of the best of the several narrow box canyons cutting through the rocky masses. 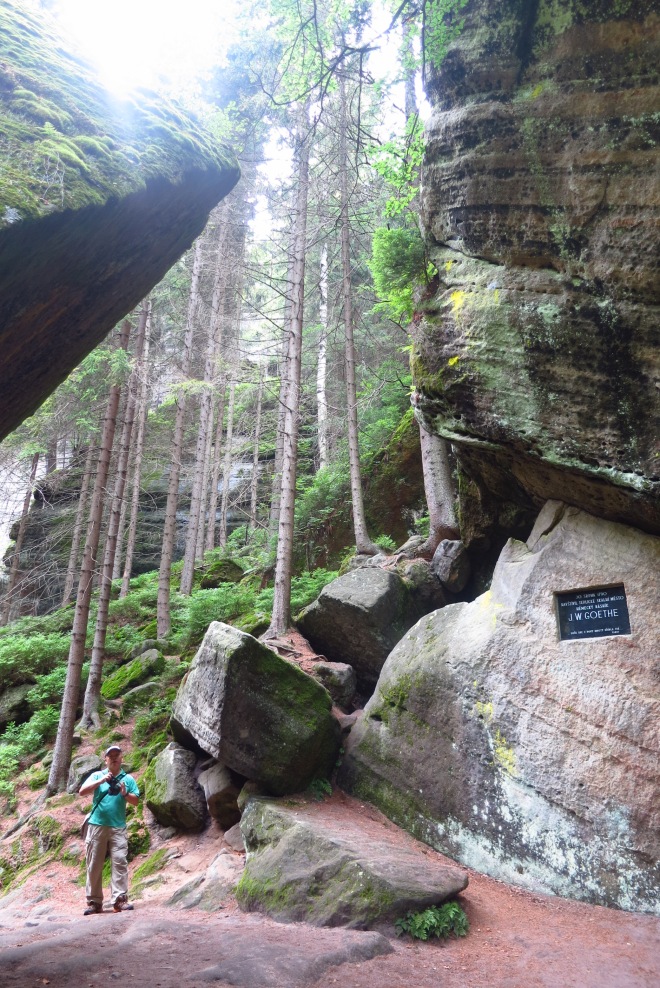 The loop around Adrspach Rocks (which can be reached in less than 2 hours walk from Teplice, via the Wolf Gorge path) is much shorter (2.5 kilometers), but makes up for its brevity with an astounding assortment of gravity-defying rock pinnacles. Near the end of the loop, the trail squeezes through the narrowest of all the area’s amazing chasms – the Mouse Hole, which I, with my svelte figure, only just managed to pass through – generously proportioned hikers would probably have to turn back at this point and retrace the outward route for fear of getting permanently stuck inside the fissure!

Surely the only reason that Adrspach-Teplice Rocks isn’t a standard fixture on the Czech Republic tourist  circuit is that it’s a bit tricky to reach; from Prague we had to change train no less than four times (a long morning’s travel), and upon leaving had to change another four trains during our onward journey to beautiful Olomouc.  It’s richly worth the hassle though. and with several very nice (and surprisingly cheap) homestays just yards from the entrance to the reserve, there’s no excuse not to make a longer stay of it! 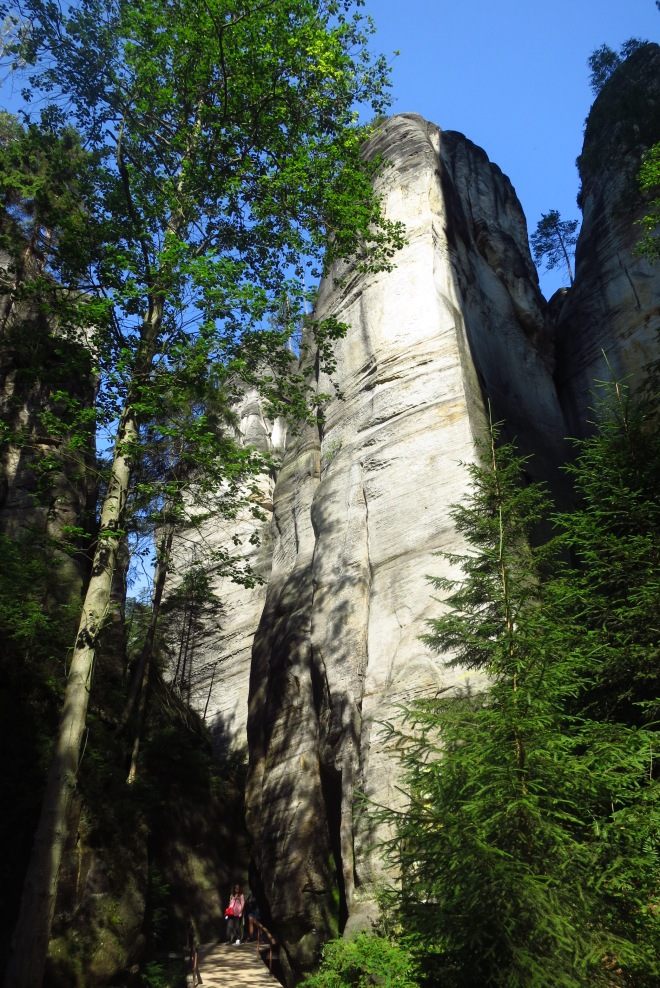 One thought on “Adrspach Teplice Rocks: an amazing ‘Rock Town’ in the Czech Republic”