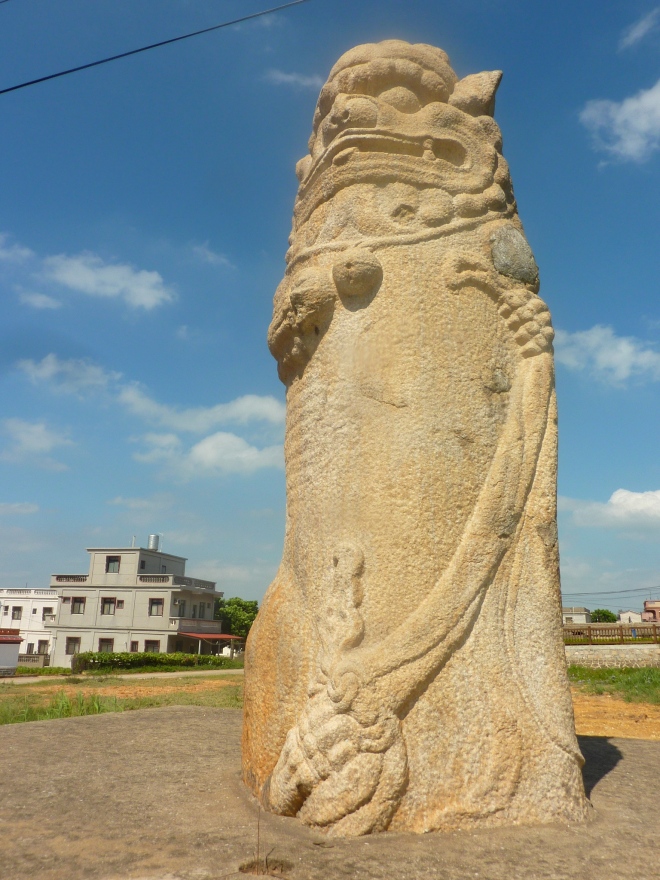 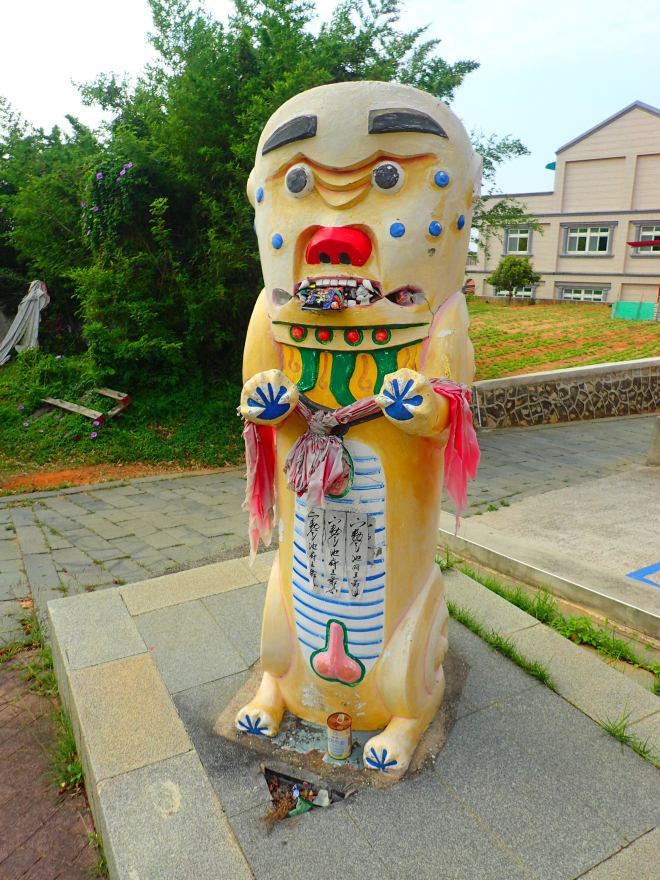 It’s been many months since I posted a blog here, simply because I’ve been working flat out getting my new book (actually a pair of volumes), Taiwan 101: unmissable places, sights and experiences on Isla Formosa (working title!) researched and drafted. It’s finally getting there! Here’s a draft of one of the 101 sections (slightly abridged: the book will have GPS coordinates for each statue, and some more info) that will be in the book as a taster. Kinmen is a must-see stop in any tour of the ROC (I know – it’s NOT part of Taiwan, so no angry messages please!), and the island’s fengshiye (wind lion gods) are one of its quirkiest and most fascinating sights [my total of statues found and photographed to date is 78 of the 81 statues – wind lion god statue hunting can become an obsession!), so they deserve a chapter all to themselves. The pair of books will be out in May 2016.

Lions and tigers are held in high esteem by the Chinese, although thankfully not only for the perceived benefits of their various body parts in dodgy Chinese medicine prescriptions. The power symbolized by both animals is perceived to protect, and to have a calming effect on negative forces. Just as the Tiger Tablet on the Caoling Trail on the New Taipei City-Yilan County Border in northeastern Taiwan was carved 150 years ago in an attempt to quell the gales that regularly buffeted travelers crossing a high pass near Taiwan’s northeastern point, the residents of windy Kinmen island turned to the lion in an attempt to improve the feng shui in its villages and to save them from a sand blasting whenever the wind picked up.

Kinmen wasn’t always a treeless expanse at the mercy of a capricious Mother Nature, however. Blame for reducing the once wooded island to a treeless, dusty expanse rests squarely on the broad shoulders of Chen Chenggong (Koxinga), who, during his attempt to defeat the Manchu government and restore the recently toppled Ming dynasty in the mid-1600s, landed on Kinmen and proceeded to chop down all its trees for timber to build a fleet of warships for the impending battle.

Koxinga was unsuccessful of course, and Kinmen was left largely bare of trees until another exiled leader, Chiang Kai-shek visited the island three centuries later, similarly bent on retaking China from the enemy. As the long war with Communist China started to drag on, he ordered the Nationalist army to begin a program of reforestation on the island. 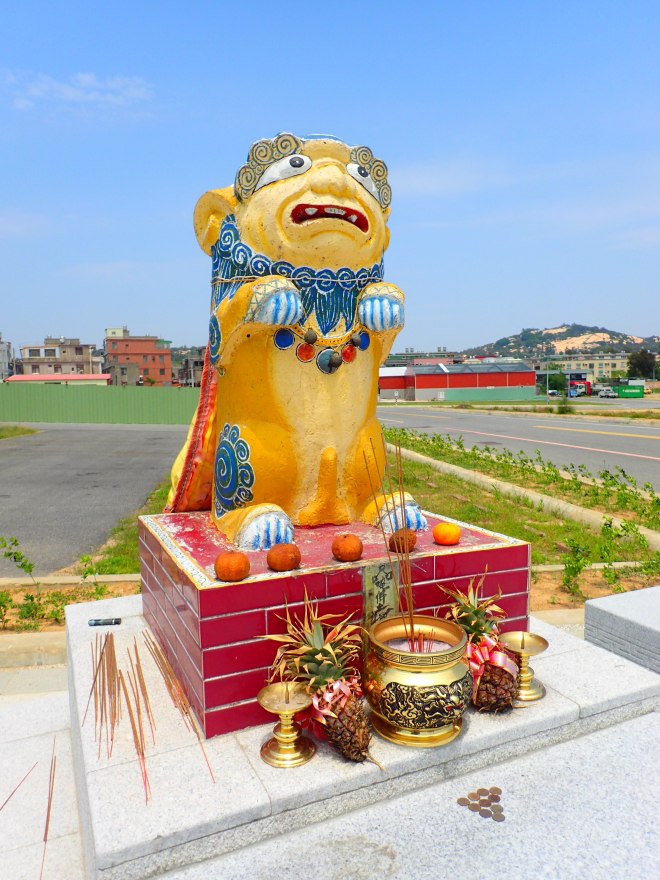 However, long before the island’s earth-binding forests were restored, locals believed they’d found another way to protect themselves from the misery of the annual northeast monsoon winds that buffeted the island each winter. They erected guardian fengshiye (風獅爺; ‘wind lion gods’) along the borders of villages, at the mouths of rivers, and in other exposed spots around the island. In addition to commanding the winds, the statues were also considered to be village guardians, repelling evil spirits and misfortune. 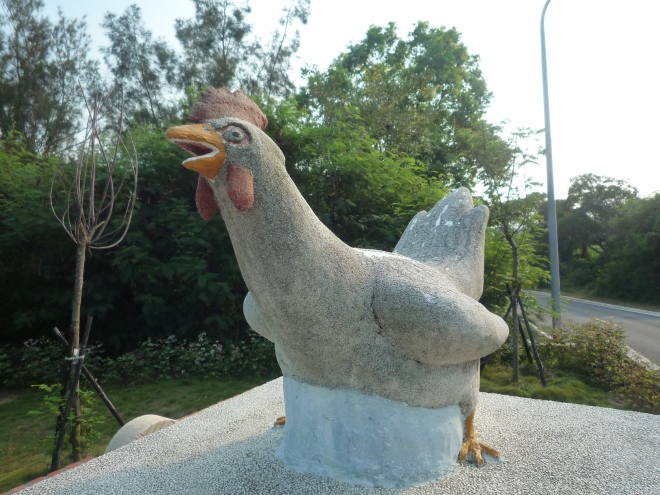 About 80 of these unique statues (plus another hundred or so smaller statues, mounted on rooftops) can be found on Kinmen. Over half are to be found in Jinsha township, which bears the full brunt of the relentless northeast monsoon winds each winter. Most of the statues (the oldest of which are thought to date back to the late seventeenth century) are made of white granite quarried at Quanzhou on the mainland. The lions come in a variety of shapes, sizes and poses, and although they generally stand upright, some are crouching, laying, sitting down, or even look set to pounce. The majority of wind lion gods are unpainted, but others have been decorated, almost always in bright, exuberant colors. They all have wide, long mouths, intended to symbolically “swallow” the wind. The statues can be male (which are easily distinguished by their large, anatomically rather exaggerated hulu (葫蘆) or female. By the way locals believe that touching the hulu of a male wind lion god statue help expectants mothers give birth to a male heir. Lesser Kinmen (Lieyu), which has just one wind lion god, instead has as its village guardian of choice the curious wind rooster (風雞), of which six can be found on the island.

Lion at Dongxiawei, in the east of Kinmen

No visit to Kinmen is complete without seeking out a few wind lion gods, and searching for some of them is one of the best ways to explore the island and get into some really out-of-the-way places. The free island maps handed out by tourist information centers on the island mark almost all of them, but even with map in hand a few are very tricky to find. 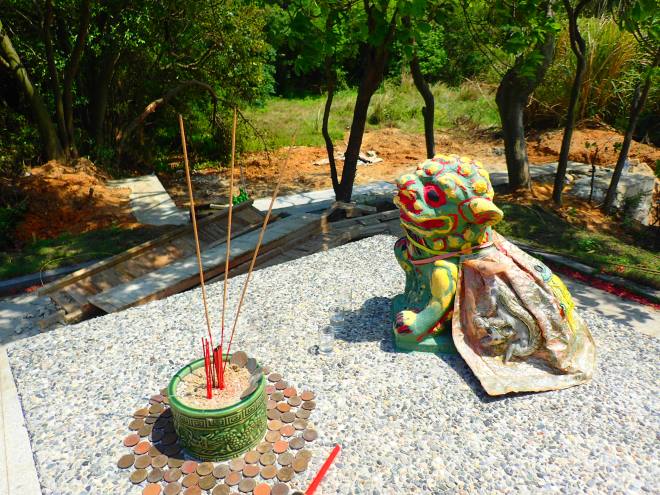 The first wind lion god most visitors to Kinmen see is a brand new one that stands right outside the entrance to the terminal building at Shangyi Airport. Another new statue, 12 meters high, towers over Shangyi Environmental Park (尚義環保公園) on the main road a kilometer east of the terminal. A visit to the park makes a great introduction to the statues; an island in the park’s artificial lake is a miniature likeness of Kinmen, on which are stone replicas of 64 of the statues.

Kinmen’s wind lion gods start to look rather alike after finding twenty or thirty, and several are such a challenge to find that they’ll drive you mad with frustration, so below is a recommended selection of the most interesting, most beautiful, unusual, or most attractively situated, listed under the name of the village in (or near) which they stand. Much of the pleasure of wind-lion-god-searching is that it takes you to some of the most traditional and rustic corners of the island, so although most of the statues listed below are easy to find, even if you don’t get to see the statue, the nearby area is still well worth exploring!

Xiabie (夏墅): The closest fengshiye to Jincheng town, this stylized, almost cartoonish, bright blue lion stands beside the road to Jiangong Island and Koxinga Shrine, in the tiny front yard of a newish house.

Guanlubian (官路邊): Sitting under a huge banyan tree across a grassy field from the tiny settlement of Guanlubian, and staring out over pastoral farmland, this unpainted statue has one of the most peaceful positions of any on the island. 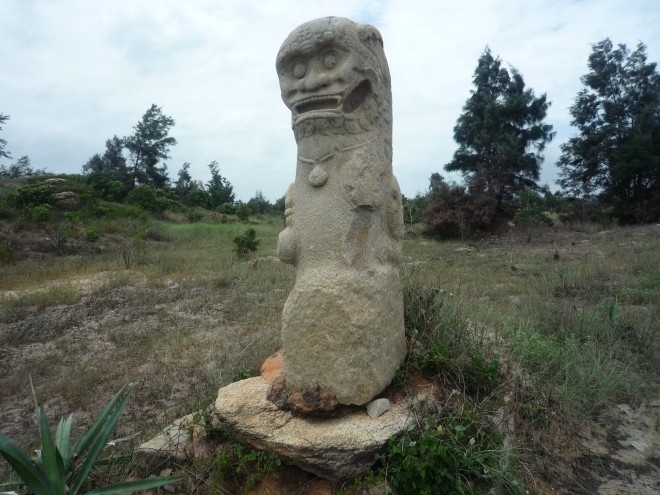 Oucuo lion a few years ago…

Oucuo (歐厝): Kinmen’s remotest wind lion god has finally been tamed. Once tricky to find, a path has recently been laid to it from the nearest road, and the lower half of the statue is now hidden in a rather plain marble plinth. Not as atmospheric as it was, but still worth seeing.

Sihu (泗湖): Large, yellow-painted statue, highly stylized. In the center of the village.

Houhu (后湖): Beside the road leading down to the beautiful, extremely long beach at Houhu, this unpainted stone lion has claws held up in almost comical ‘attack’ mode, and an unusual, fanned tail. 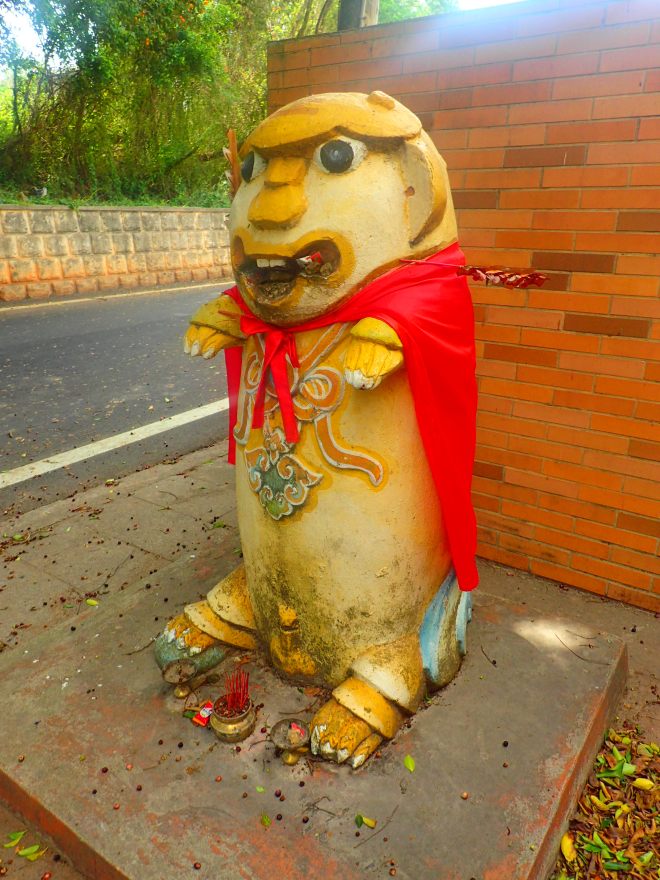 Huxia (湖下): Delightful statue, painted in attractive ochre and brown, beside the road behind the village elementary school. 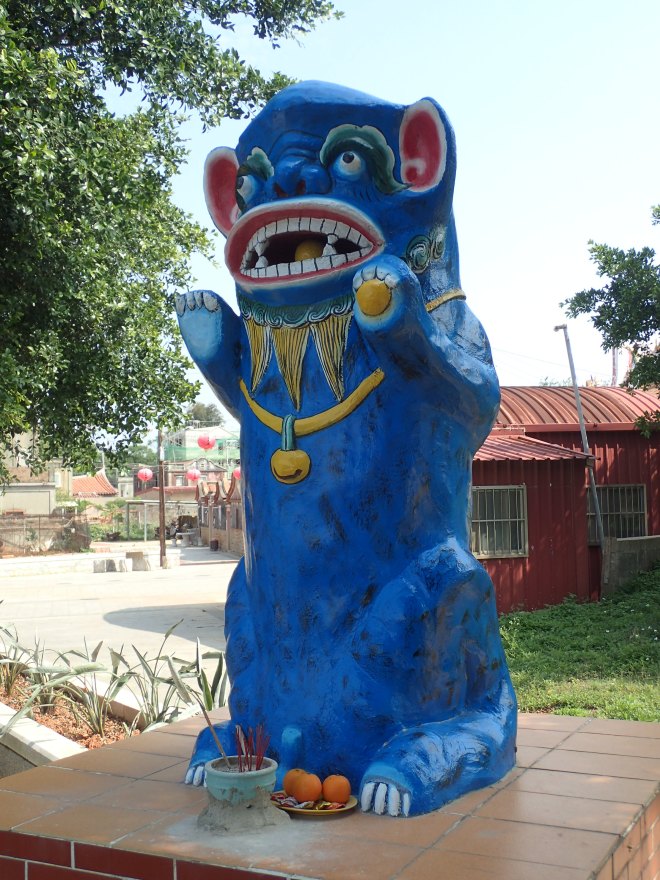 Xiguoshan (昔果山) A lovingly painted, bright blue lion right beside the perimeter wall of Shangyi Airport, on the edge of a small village which features some lovely saddleback houses.

Anqi (安岐): The tallest old wind lion god statue in Kinmen (3.8 meters tall), now sporting a gaudy new coat of bright colors, standing in a small park on the outskirts of the village.

Qionglin (瓊林): Probably the best-known (and most photographed) wind lion god on Kinmen, this is a fairly large one (almost 2 meters), standing conspicuously beside busy Huandao North Road (還島北路), next to the exit of the town’s wartime tunnels (which are open to the public). 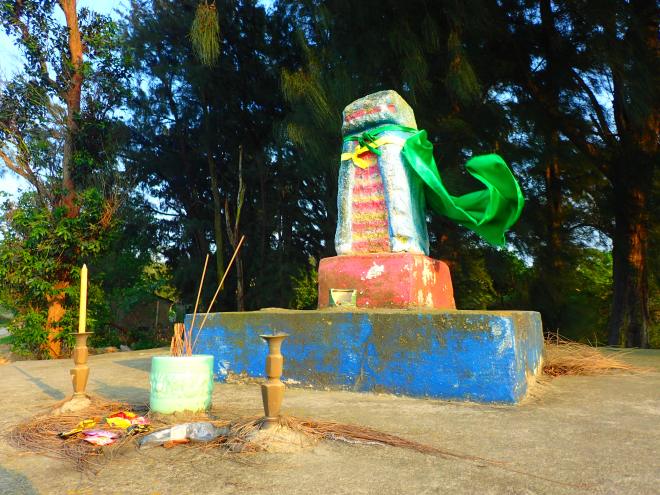 Zhonglan (中蘭): Beside the south side of the busy Qionglin to Shamei Road, this small statue is painted bright blue, with a striped red-and-yellow chest, perched on an old army pillbox.

Chenggong (成功): Small and unpainted but rather fine statue on a marble plinth, with a fine back of furry curls. Check out the wartime Chenggong Tunnels nearby and the Chen Jing-lan Western-style House (one of the finest on Kinmen) with its outrageous winged Statue of Liberty, just behind the lion.

Tahou (Shanwai) (塔后): Not even wind lion gods are sacred anymore, as this one, just south of Kinmen’s second largest town, was recently moved a hundred meters from its original position, to make room for new housing development. The new setting is an improvement however, and the painted orange statue with its rather cute expression, is one of the most photographed on the island.

Huqian (Shanwai) (湖前): Painted in faded orange and blue, this statue, unusually, leans forward, as if about to pounce. At road junction in middle of village.

Tianpu (田埔): Near the easternmost tip of the island, this fine, skillfully carved statue right beside the road has an unusually friendly expression.

Yangzhai (陽宅): This village has four wind lion gods, all worth visiting, and a few other interesting sights, such as the Chen Jian Tomb. The two most interesting statues lie either side of Huishan Temple on the eastern edge of the village. The statue in front of the temple is old and eroded, while the larger one a hundred meters away is brightly painted, with a large red nose.

Bishan (碧山): This fine old village, which boasts a couple of very fine old Fujian and Western-style buildings from the early twentieth century, has two statues, both slightly tricky to find. One lies in vegetation behind one of the Western houses, and the second, finer one (GPS coordinates below) is at the end of a short lane on the northern edge of the village. It’s tall, thin, and intricately carved both back and front.

Shamei (沙美): There are no less than seven statues around the largest village in northeast Kinmen, although the little one just south of the main road to Jincheng, beside a small lake, is perhaps the most interesting. The tiny statue, painted deep blue, is shaded by a pair of small banyan trees.

Yangshan (洋山): This lovely village beside the ocean towards the northern tip of the island is studded with attractive fish ponds, beside the largest of which lies a tiny unpainted stone statue, unusual in that it’s lying down, looking out over the water. A bit tricky to find in the maze of narrow alleyways, the village has a second lion, also a bit of a challenge to find.

Xiyuan (西園): A large unpainted male lion stands guard in front of the salt field office in this village near the island’s northern tip. A second similar statue (its mate) stands fifty meters away, behind the temple.

Mashan (馬山): Near the famous observation post at the northern tip of the island are three interesting statues. A small one, looking out over rough grassland, stands to the right of the road shortly before arriving at the entrance to Mashan. A much larger one with a proud grin and prominent, goat-like legs is less than a hundred meters away, beside the new road along the sea dyke to Guanao village. The third, of similar size, is 500 meters further south, just off the old road south from Mashan to Guanao. Turn left at the pink tiled house.

9 thoughts on “The Wind Lion Gods of Kinmen”