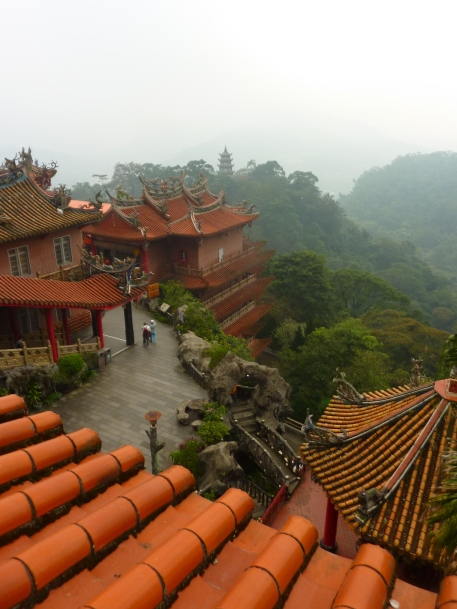 If El Nina is really to blame for all this horrendous weather that’s been making any serious hiking anywhere east of Taipei city difficult or impossible for the last two months (the rocks and steep slopes are too slippery!), it looks like I’ll be looking westwards most weekends for the forseeable future. Certainly the weather did its very worst last Saturday (November 20th), and our Pingxi Three Peak ‘Challenge’ hike turned into a muddy, slippery, and very short hike up the easiest of the three summits.

After that fiasco, Sunday’s original plans were thrown to the winds, and by 7:30 am on Sunday morning I was on a High-speed train heading south to the warmer, sunnier climes of Hsinchu.  That, combined with a service on the Taiwan Tourism Bureau’s useful new Tourist Bus Network trips, has finally made the wonderful, temple-covered heights of Lion’s Head Mountain feasible as a day trip from Taipei.

Arriving at Hsinchu in just 35 minutes, I was just in time to catch the 8:20 service to the mountain. Unfortunately, I was obviously not the only one to have heard about the new service, or that it was free until the end of the year, and I joined the end of a long queue of elderly people, waiting.

Us Taipei city dwellers often joke about how well-behaved we are compared with those down south, and this bunch certainly did nothing to prove us wrong. As soon as the bus pulled up, the queue dissolved into an all-out scrum, with everyone pushing and shoving to get on the bus first. They needn’t have bothered: the bus was already packed. Calmly letting everyone else fight their way on first, I was the last to board – there was only just room to squeeze on – and as everyone inside settled in, I had just enough room to sit on the step just inside the door, and admire the view as we drove southwards.  And it’s a lovely view in places; the countryside is throughly soporific, with rolling hills;  farmers ploughed their fields as we passed, and the foothills of the Central Mountain Range stood pale grey on the horizon.

Many of the passengers got off at Jhudong, although they nearly didn’t make it, as a crowd of passengers waiting at the bus stop there were so eager to board that they rushed the bus as soon as it stopped, a few actually climbing on and pushing those trying to get off back into the bus. Now that’s something I haven’t seen in Taipei for many years!

Futian Temple from below

Just over an hour after leaving the High-speed Rail station, we passed under the gate at the entrance to the Lion’s Tail trailhead. Unfortunately, rather than connecting with the shuttle bus which drives round the base of the mountain to the Lion’s Head trailhead (much the most impressive introduction to the mountain, I found out later), I alighted here, and started my hike from the beast’s bottom.

Shihshan Rock Face, below the summit of Lion’s Head Mountain

The visitor center is here, and armed with a good English-language map of the trails in the area, I set off to explore. A short trail leads to the Sticky Rice Bridge, spanning a crack-like cleft called ‘A Thread of Sky’ (一線天) in a beautiful wooded gorge (the bridge is actually made of stone, but the grouting holding the blocks together contains the said rice, a building method quite common in bridges and even forts and other constructions  all around Taiwan). A little further up the gorge, reached by a different path, Water Curtain Cave is the biggest natural overhang on the mountain. The temple built under it is a typically bland and unphotogenic construction, but it’s a fascinating place, despite the group of amazingly loud women milling around and shouting at each other.

Kaishan Temple, with its garden of windswept conifers, is built (like almost all the temples on Lion’s Head Mountain) in front of a natural overhang in the cliff face

The route from the lion’s tail to the summit really has little to recommend it in itself (it’s actually a road), so I took a detour along the attractive Tengping Trail, which begins with a steep climb up steps. The forest here is lovely, although my forest stroll was short-lived, as I descended too early in my eagerness to bag all the temples on the mountain, crossing a pretty  wooded stream and climbing to join the main route up the mountain from this side at the Wanfo Temple. The temple disappointed: it was quite modern, and not especially atmospheric, although very peaceful. Climbing upwards, the string of temples and nunneries that followed were even less appealing, and the excitement of coming here had worn off well before I reached the highest point of the route: a concrete resting shelter laboring under the inappropriately poetic name the Moon Watching Pavillion. 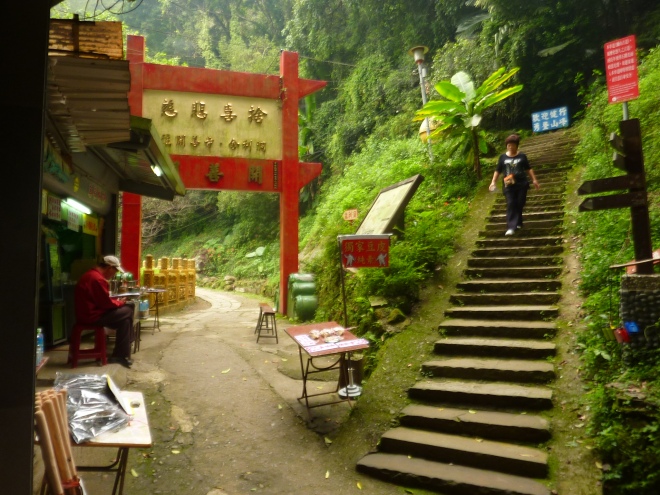 Things improve greatly, however, as the trail passes over the top and down to the lion’s head. The path is bounded on the right by a  tall, vertical and rather impressive cliff for a long spell, then winds down the steep, wooded hillside past a sequence of pretty small shrines, statues and ornamental shelters nestling in the forest, then passes through a couple of old-looking gateways to reach the main showpiece on the mountain: the Futian Temple and its cluster of satellite temples and towers. The golden roofs, red pillars, and florid decoration of the hillside temples , and above all the shapely pagoda crowning a nearby hillock is extremely atmospheric, and would have made for some great photos, although by starting my walk at the wrong end of the lion, it was early afternoon by now, and the bright morning sun and blue sky had disappeared  behind the afternoon mist that had already started rolling in at noon.

The Daode (‘Morality’) Gate, the gateway to Futian Temple from above

There was a crowd waiting for the shuttle back to the visitor center for a connection to the bus back to Hsinchu High-speed Rail station, and it was an uncomfortable 20 minute ride, with my head jammed in behind the minibus’s TV. Being among the first off the vehicle, I forgot all idea of being polite and made a dash for the waiting coach, already nearly full, and managed to snag one of the few remaining seats. The day’s jostling finally over, I looked forward to a thoroughly civilized train ride back to Taipei.

Getting There: High-speed trains from Taipei to Hsinchu take less than 40 minutes and are the best way to go for a day trip; they’re not outrageously expensive either at NT$260 each way. To save a little, go early and there’s 10% discount.  Shuttle buses run about hourly from the bus station outside exit 4 at Hsinchu High Speed rail station about hourly weekdays and every half-hour or so on weekends. The service is free until December 31st 2010. See the Tourist Shuttle Bus website at http://www.taiwantrip.com.tw/Besttour/Info/?id=4  for a timetable.

Don’t get off when most of the other passengers do, just inside the tall entrance gate to the Scenic Area. Stay on until the bus parks in the parking area after the visitor center and take the shuttle minibus (which connects with arrivals) to the Lion’s Head, which is by far the best introduction to the mountain. The trip will appear (starting at the Lion’s Head)in the revision of the second Taipei Day Trips book when it comes out, hopefully in May or June 2011.

Be prepared for crowds at weekends, and lots of pushing for seats!